Horsepower numbers are the quickest and easiest way to brag to your friends about the car you’re driving, as well as have some fun doing it.

And, while certain hum-drum people may bemoan horsepower with statements like, “What’s the point of all that power? It’s not like you can use it,” the truth of the matter is, you can use horsepower anywhere. From passing with ease on the highway, to taking a drive just for the fun of it — horsepower is both a convenience and something of a mental health booster.

The problem is that power always comes at a premium. So even though horsepower figures are starting to get out of control on newer cars, you might be hard pressed to drive a car with more than 300 horsepower off of a lot for under $50,000.

The 700-plus horsepower from a Hellcat Charger, for example, sounds great. But you probably won’t be able to pick one up with a warranty for less than six figures. Even the Scat Pack car, with 485 horsepower, will most likely set you back over $60,000.

So, how much horsepower can you get with a window sticker less than $50,000?

Some rules for this list. First, no trucks. Cars only. Yes, trucks like the Ford F-250 are available with very, very powerful engines starting under $50,000 — but let’s be honest, those vehicles are for tow, not go. You buy them for torque, not horsepower. Horsepower has to result in quick 0-100 km/h times.

Second, we’re only including the most powerful versions of each model you can get for under $50,000. So, while a High Output EcoBoost Mustang or Dodge Challenger GT may make more horsepower than some lesser entries on the list, they don’t get their own entry because their more buff siblings are included. 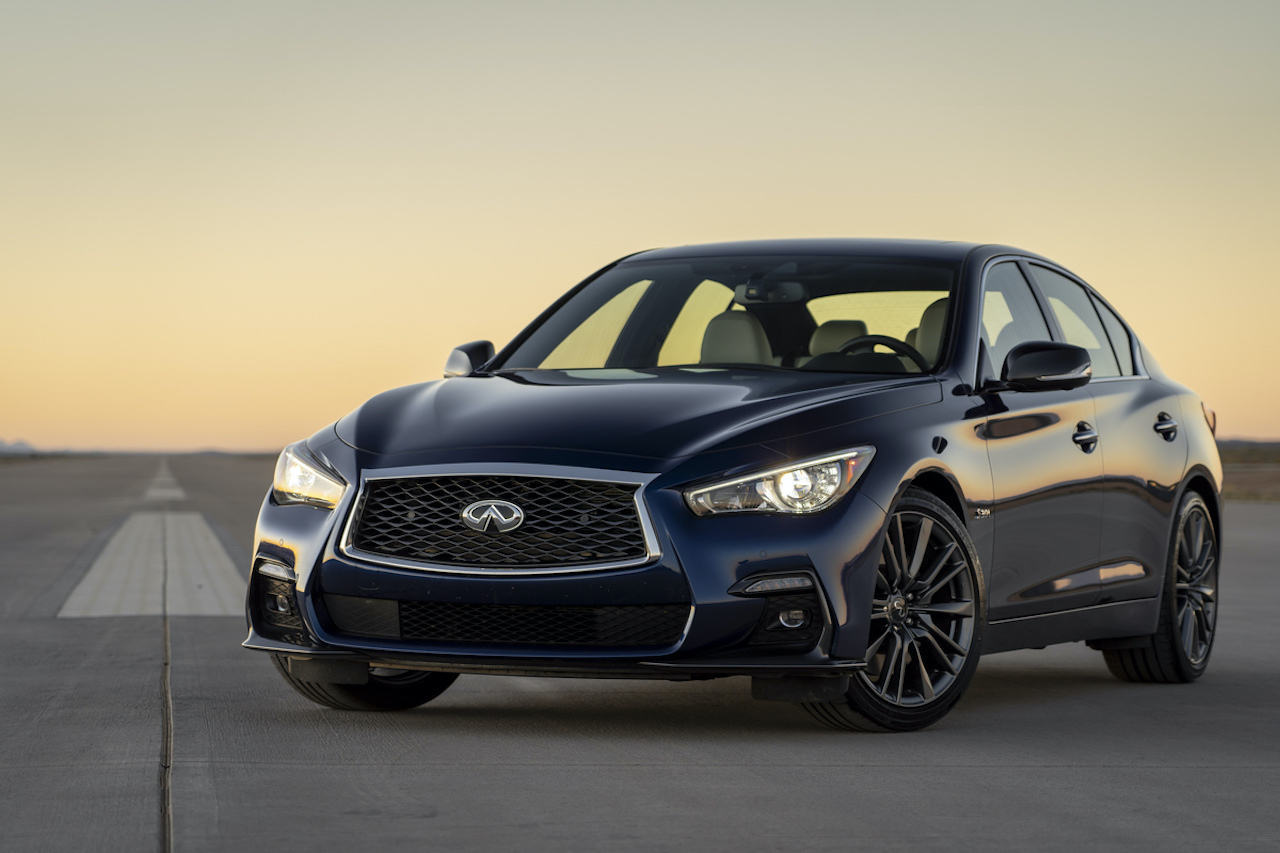 The big story with the new Infiniti Q50 (branded as a Nissan Skyline in Japan) is the wicked hot 400 horsepower “Red Sport” model. However, you’ll need to shell out roughly $60,000 to get into a Q50 Red Sport. 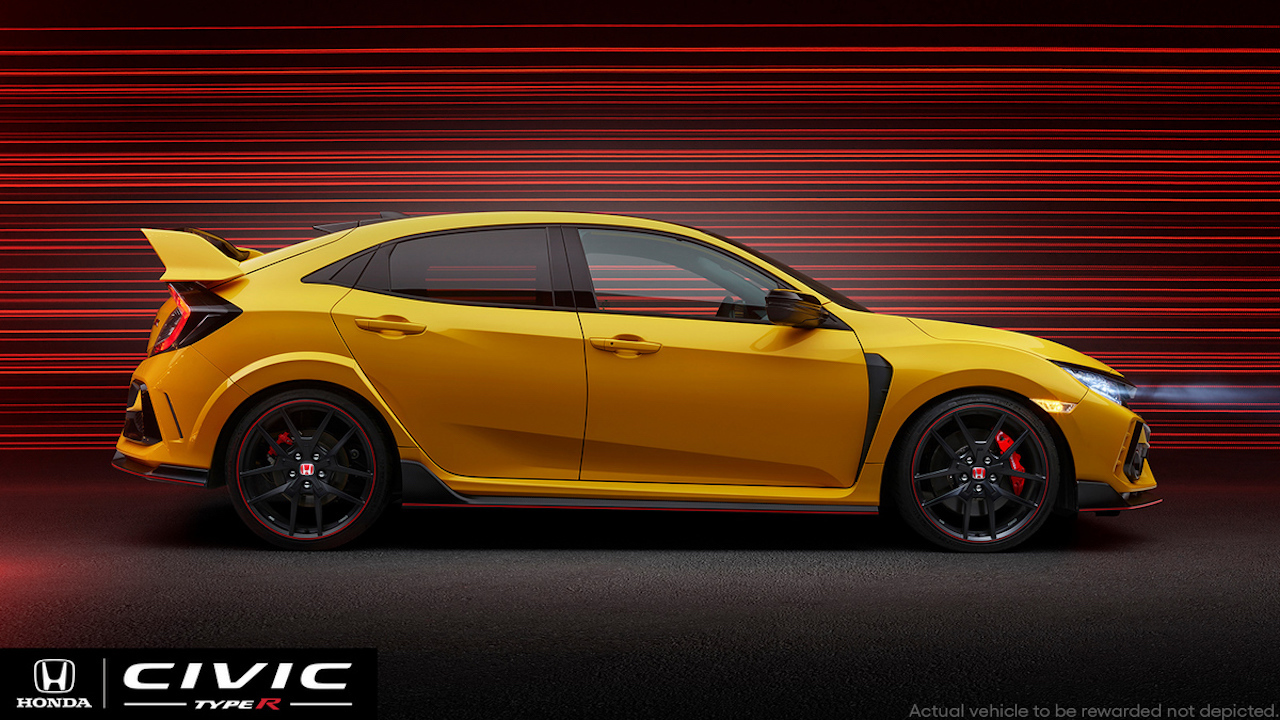 Horsepower is certainly not the whole story with the Honda Civic Type R. Sure, the 306-horsepower produced by the “K-series”, turbocharged inline four engine, propels the car to 100 km/h in roughly five seconds. That sounds great on paper. And it is great in practice.

But the real brilliance of the Type R comes in the form of endless amounts of grip, brilliant chassis tuning and arguably the best damn manual transmission in any car. Those elements, combined with the power, build into one of the best driver’s cars starting under $50,000. 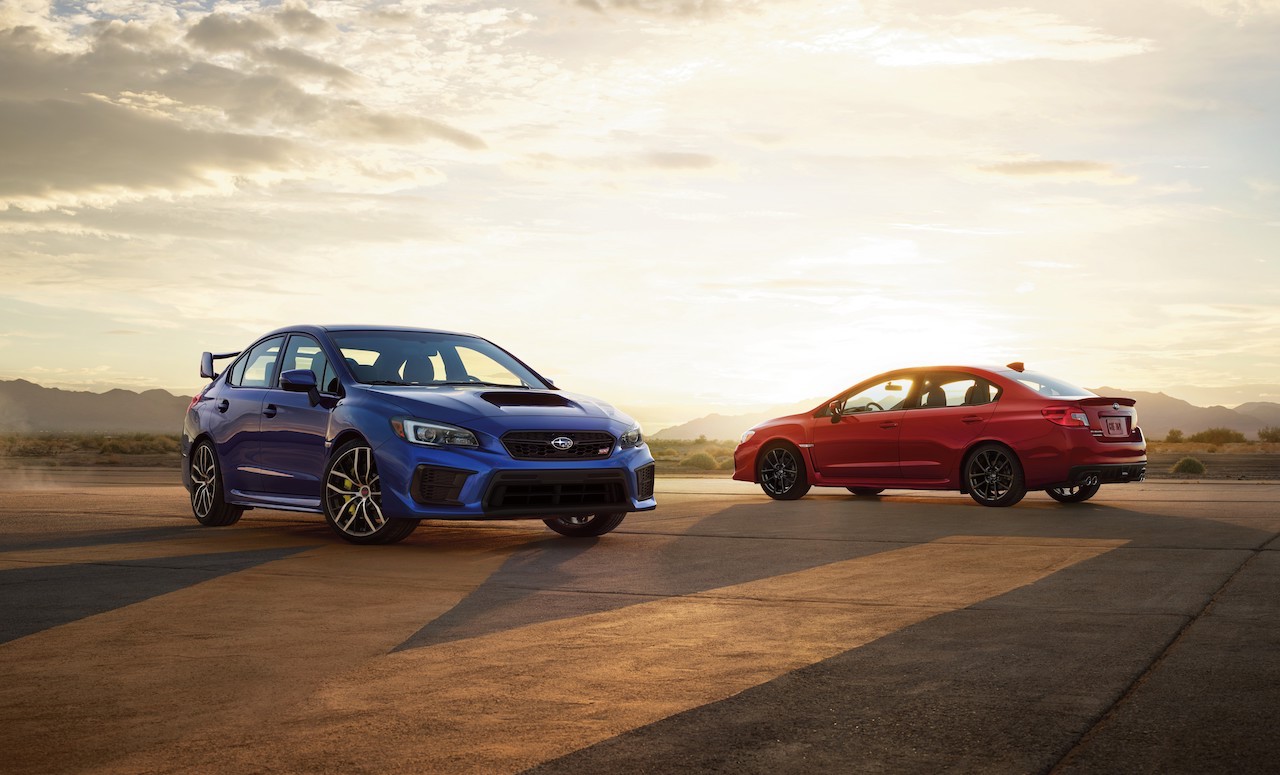 Put aside your jokes about vape pens, backwards baseball caps and Supreme stickers and recognize that the WRX STI is still one of the best performance bargains on the market.

It’s difficult not to compare the WRX STI directly against the Honda Civic Type R — and when doing so, not seeing some distinct advantages in the WRX’s corner. The WRX has more power, a lower starting price tag and one of the best AWD systems anywhere. Its exterior styling is also more… let’s say, “conservative” than the Type R — which is really saying something when you’re calling a car with gold wheels “conservative”.

While it’s overall less practical than a hatchback and loses points for a rough ride and dated interior, there’s certainly no complaints about the 310 horsepower produced by the 2.5-litre turbocharged boxer four engine. Or the 5.3 second to 100km/h time. Or the mandatory fun manual transmission. 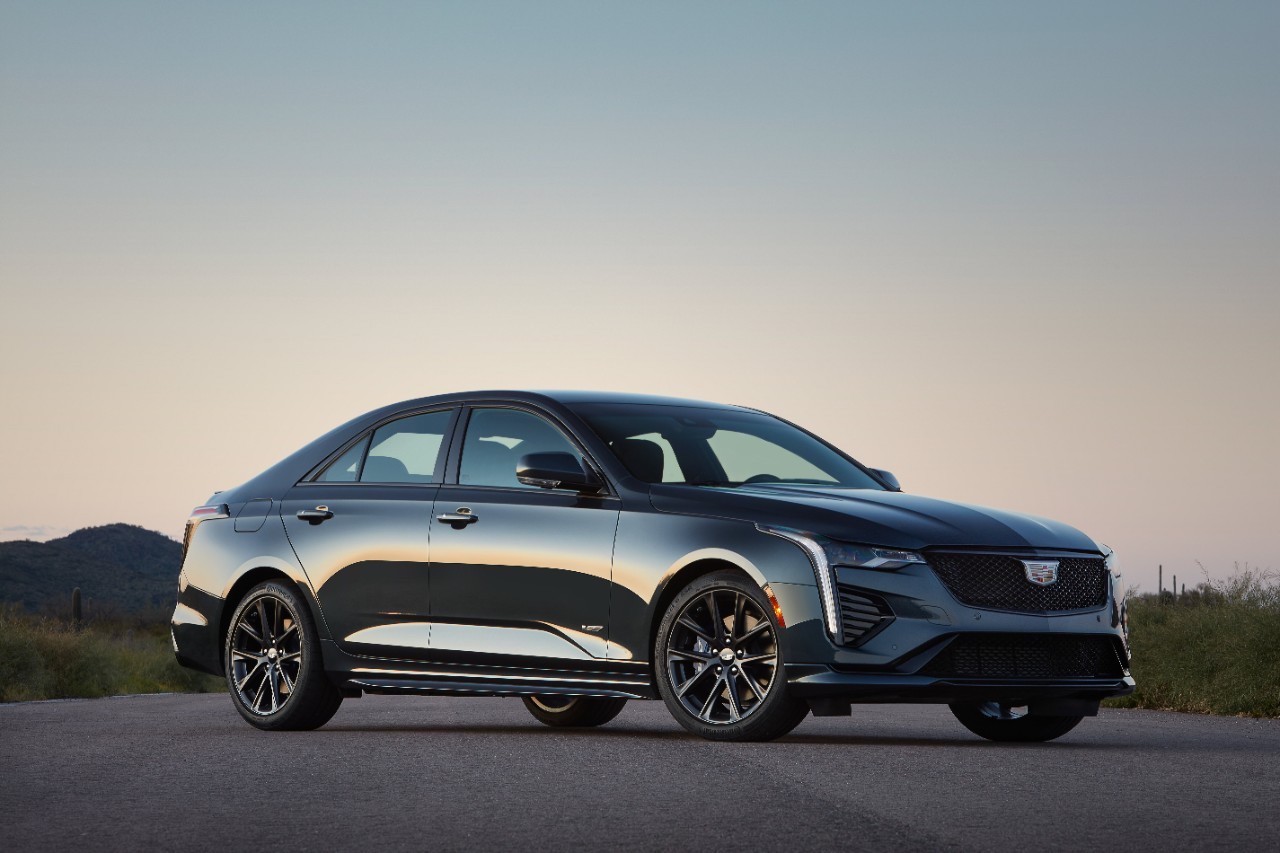 You have to give Cadillac props for trying their absolute damnedest to get up the nose of German and Japanese sport saloon rivals.

A $46,000 entry price is a fairly competitive one for the CT4-V, and while its 2.7-litre engine is a wee bit down on power compared to some rivals from BMW, Genesis and Volvo, its 4.5-second 0-100 km/h time makes that power deficit irrelevant in the real world.

What the CT4 lacks in interior quality when compared to its European rivals, it makes up for in ride quality — a feature often sacrificed when shopping hotter, performance oriented sport saloons. 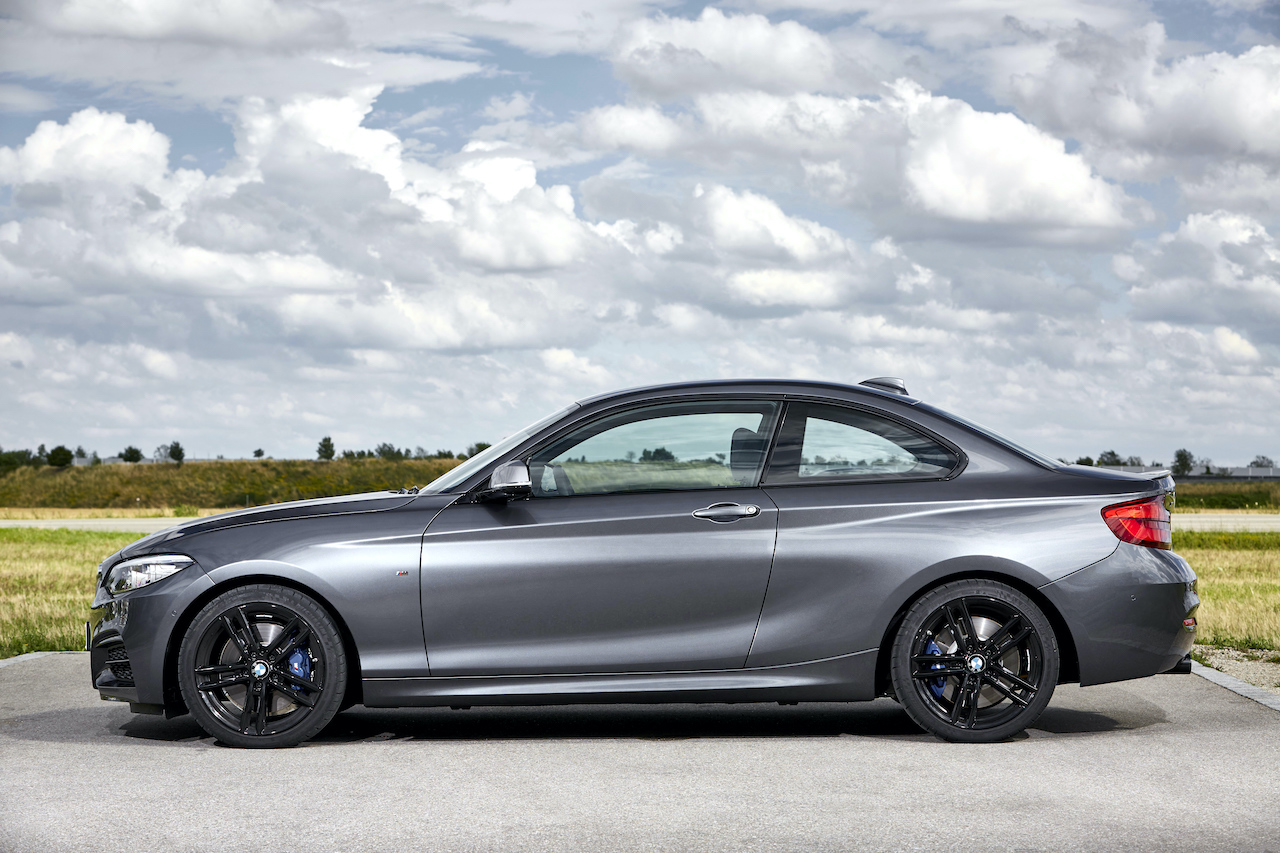 If a new Toyota GR Supra or BMW M2 is just out of your price range, you might not find yourself too disappointed by settling for the BMW M240i. This “lesser” Bimmer features the same inline six, twin-scroll turbocharged “B58” engine found in both the aforementioned cars.

It may make less power, but it’s best recorded 0-100 km/h time is only fractions of a second off the pace of the Supra and M2 — at around 4.3 seconds, it’s a proper fast car.

Also, the 2-series has mercifully not adopted the new BMW mega-grill, so it’s subjectively the best-looking BMW you can buy. 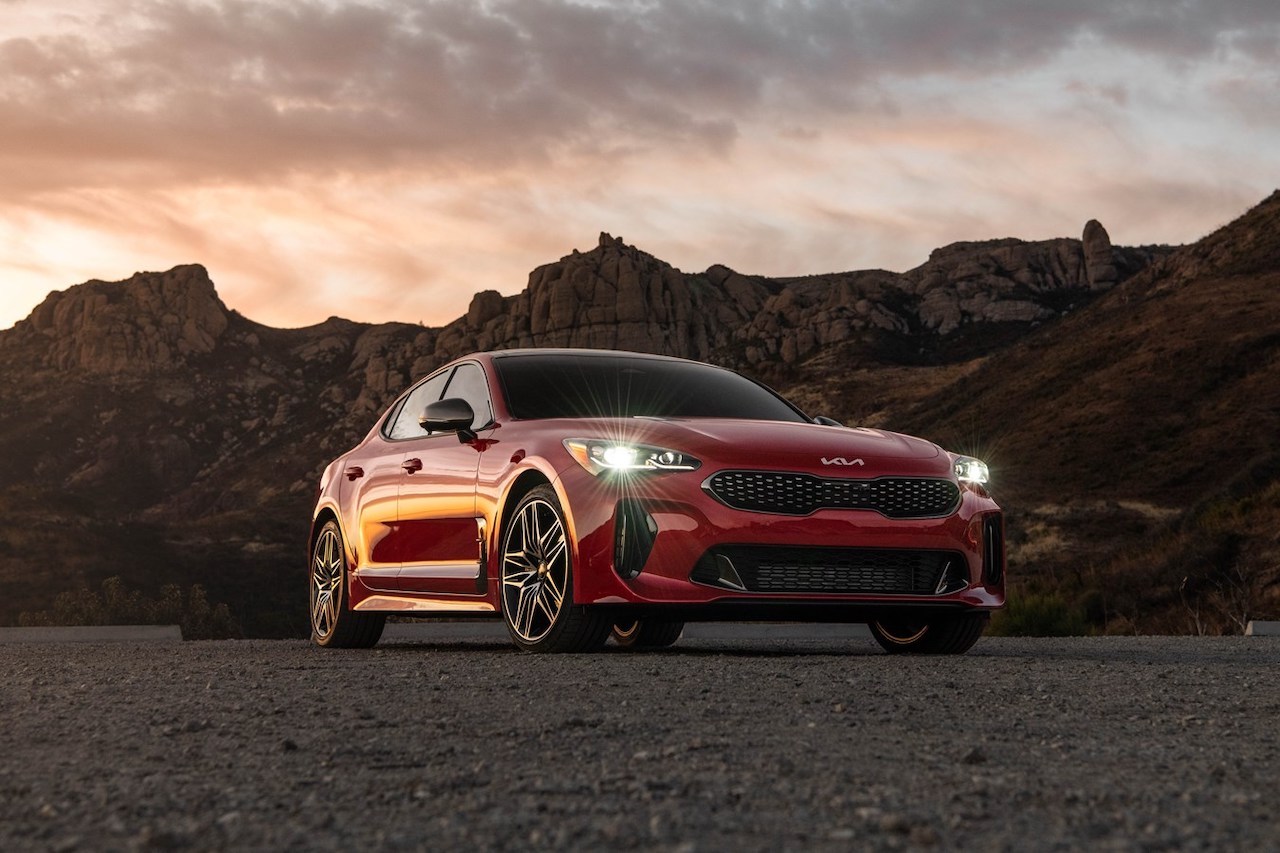 While the Stinger GT may lack the interior quality of a BMW or the thrill of the driving experience offered by the Honda Civic Type R, there are a few areas in which the car accels.

First is in the options list. The Stinger GT offers just about every infotainment, driver comfort and safety feature currently available on any car on the market. The second is the performance figures. The Stinger GT’s 3.3-litre twin-turbo V6 is enough to propel the car to 100 km/h in under five seconds. Nothing to sneeze at.

Lastly, and perhaps most importantly to anyone who would actually consider buying this car, you get all of those features and all that performance for a very competitive and compelling (for some) price point. 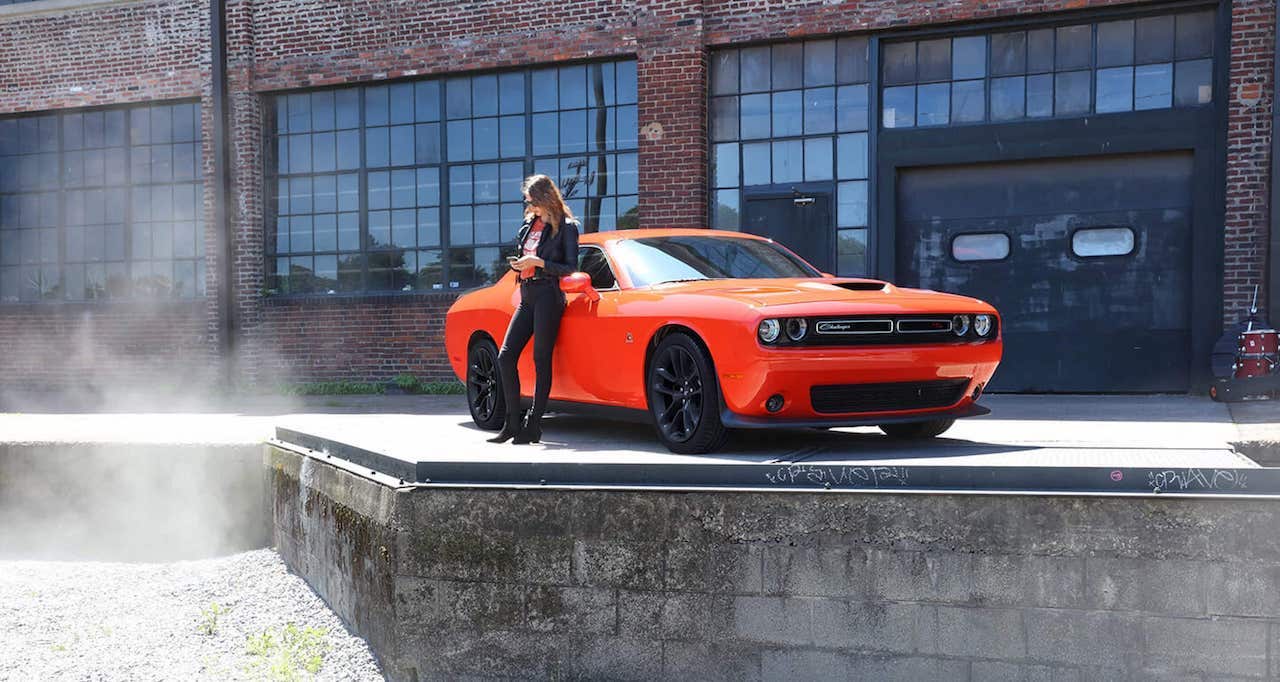 The Challenger Scat Pack and Hellcat get all the headlines with their big horsepower numbers. And of course, Dodge sells a great deal more SXT and GT V6 models than any other variant.

But Scat Packs and Hellcats can be fairly pricey, even if they do offer big horsepower at their respective price points. And even though the V6 variants produce over 300 horsepower, let’s face it, a V6 just isn’t what you had in mind when you fantasized about owning a Challenger.

Luckily, Dodge still offers the Challenger with the familiar and seasoned 5.7-litre HEMI V8, producing 372 horsepower; enough to propel the Challenger to 100 km/h in under five seconds. More importantly, you get 410 lb-ft, so you can actually feel the excitement of that acceleration. 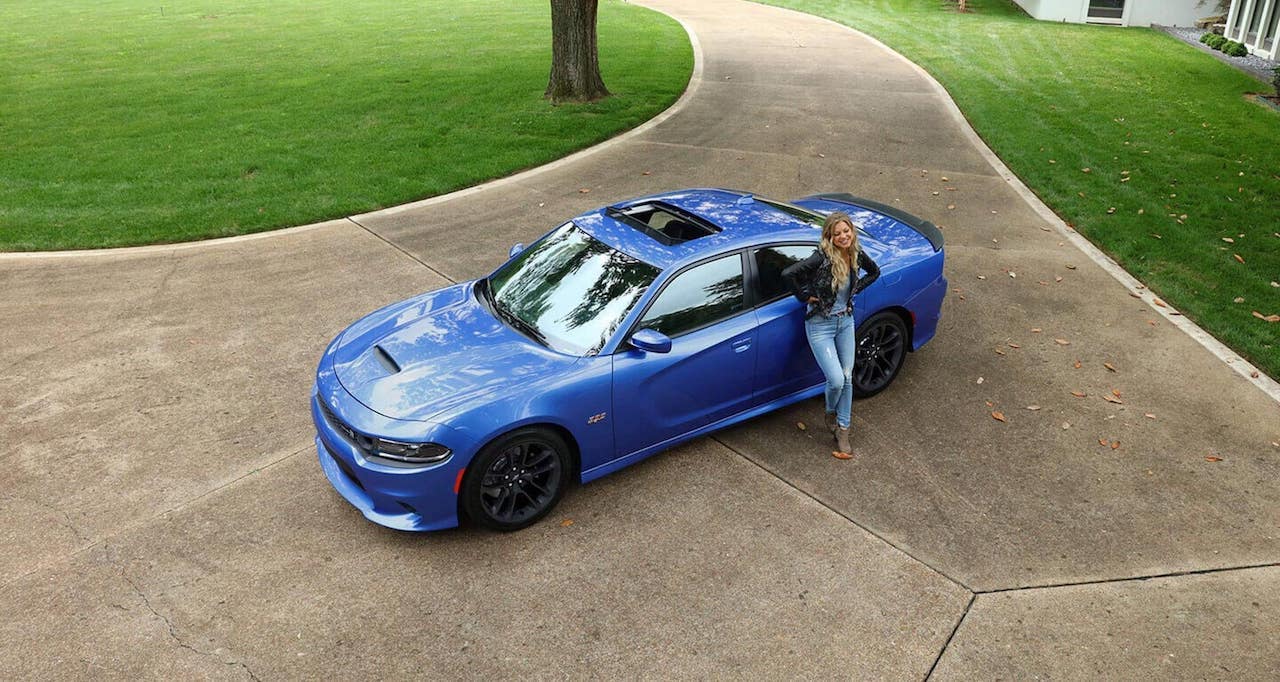 Everything said about that Challenger, you can say about the Charger. Although its two extra doors will run you a premium of about an extra $5,000 when comparing trim level to trim level.

In both cases, the R/T packages offer you aggressive, muscle car looks which are nearly indistinguishable from the monstrous Hellcat. However, in the Charger’s case, its ubiquitous, American sedan profile means it’s a little stealthier than the Challenger. So, you can have muscle car fun and attitude, without quite so much attention from Johnny Law. 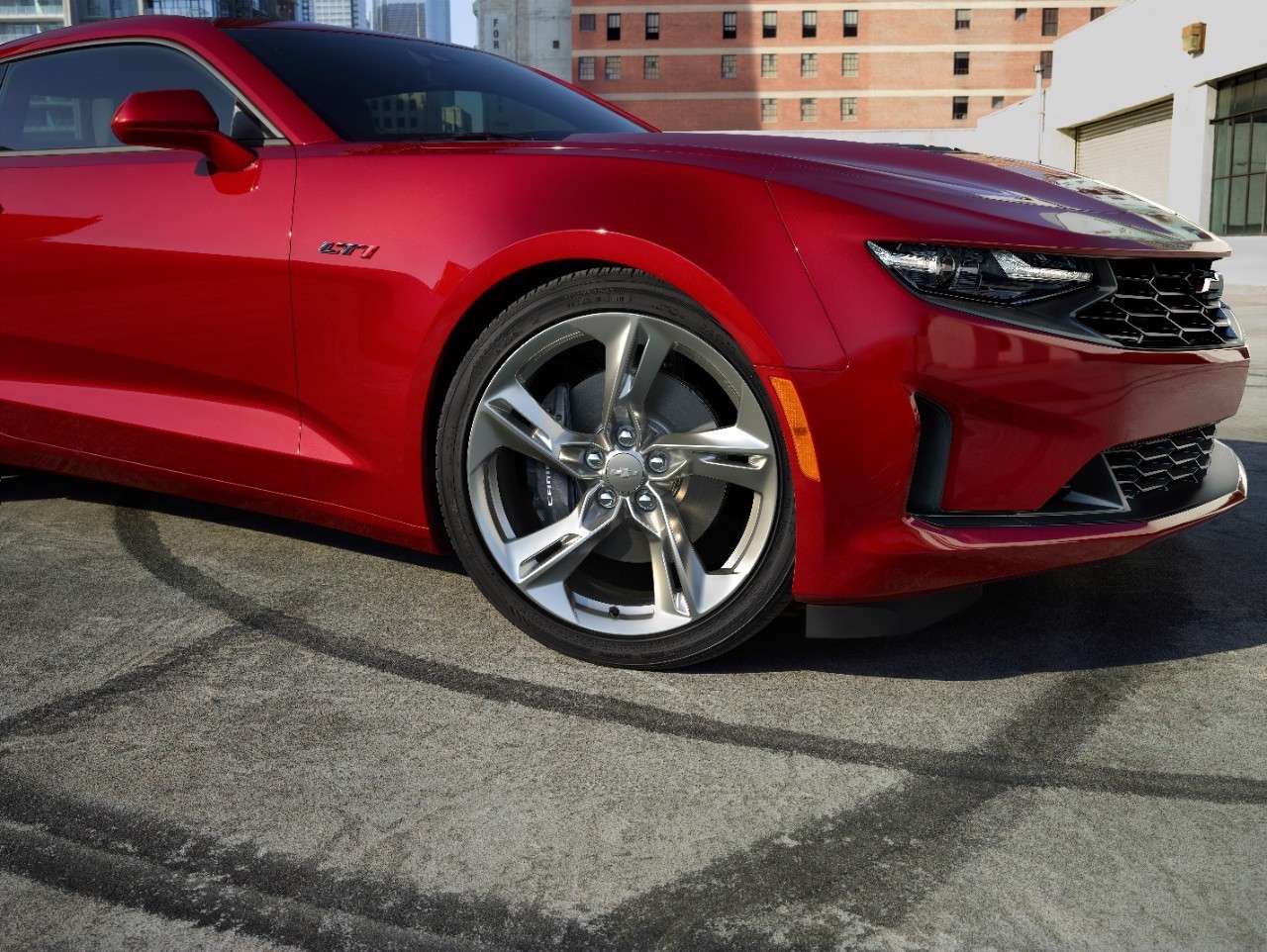 The LT1 is the best kept secret in the world of muscle cars at the moment. The premise is simple; offer all the core performance enhancements of the SS trim — namely, the 6.2-litre V8 producing 455 horsepower, but save all the bells and whistles to keep the price down over the 1SS trim

In some scenarios, it may be cheaper to buy yourself a low-optioned, V8-powered Camaro LT1 than it would be to drive off a lot with the high-optioned V6 Camaro like the 335 horsepower 3LT 1LE.

And yes, Chevy seriously needs to sort out their naming conventions as they are very, very confusing. Why the LT1 couldn’t just be the “RS” or “Z/28” is beyond me. 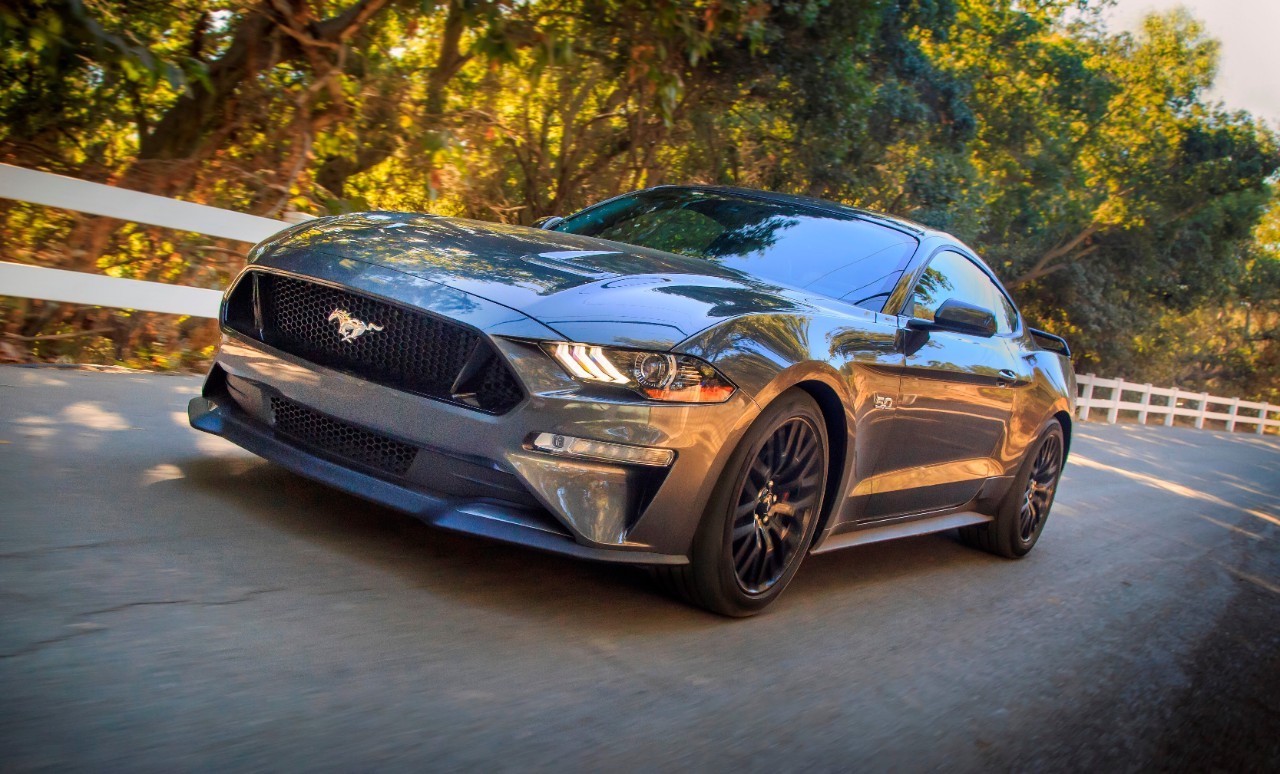 Toss whatever criticism your contrarian mind can conjure at the Mustang GT, the fact of the matter is that it’s both the most powerful car on this list and the least expensive. And unlike Mustangs of old, all of the horsepower produced by the GT’s 5.0-litre “Coyote” V8 isn’t just spun away; never really translating into actual speed.

Coupled with the 10-speed automatic transmission, the Mustang GT rockets to 100 km/h in four seconds, making it, along with the Camaro, the fastest car on the list.