MUNICH – BMW is taking two different paths to electrification with its two latest models. On the one is the iX, a crossover loaded with tech borrowed from the i3 like a carbon cage frame and all-new sustainable materials for the interior. On the other is this, the i4, that takes a BMW 4 Series Gran Coupe, tosses the inline-six in the bin, and slots in a great big battery and a pair of electric motors instead.

That makes this i4 M50 shockingly similar (no pun intended) to a standard M440i. From the outside, the biggest change is that the extra-tall 4 Series kidney grille has been turned from a gaping radiator opening to a closed-in panel that hides the car’s driver assistance sensors. From the inside, too, this is a 4 Series GC until you press the start button and instead of the sound of an inline-six you hear absolutely nothing.

BMW calls this its first “performance-focused” EV. A big deal for the company that talks more about driving enjoyment and engagement than any other. Two versions will be offered to start in Canada. One is the top-shelf M50 that we’re driving that boasts 536 hp, drives all four wheels (with two motors, 255 hp front, 308 rear), and has a range estimate of 385 km. The other, badged eDrive40, has 335 hp driving the rear wheels and a range estimate of 475 km. For reference, the small engine gas 4 makes 255 hp and the M440i has 382. The full-M M4 has just 473 hp and isn’t that much lighter. 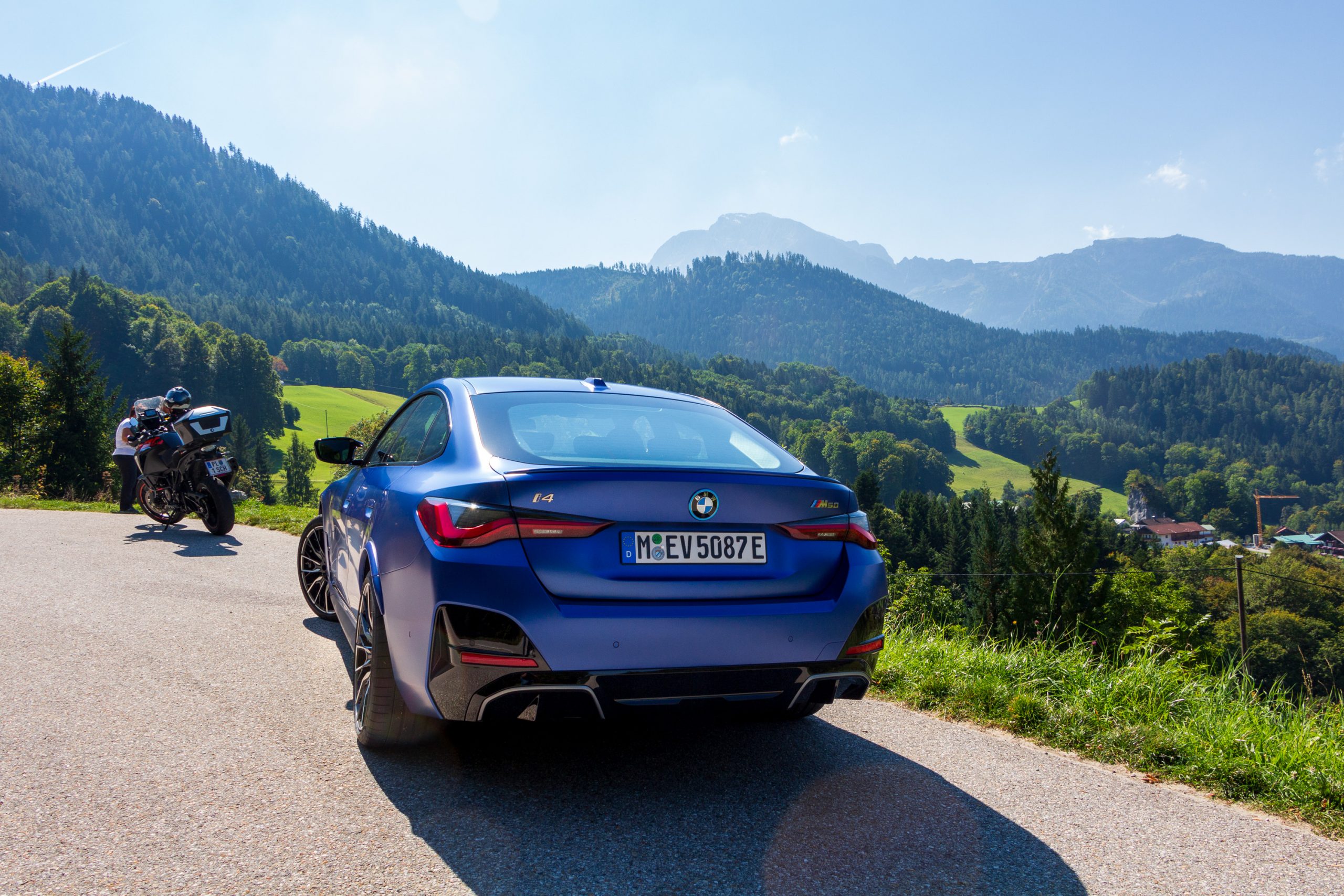 The final 67 hp of that M50’s figure comes only in Sport Boost mode, and brings with it an extra 105 lb-ft for a total of 586 lb-ft. It is offered for only 10 seconds at a time but can be activated back to back to back several times as long as the battery has enough charge. A digital gauge shows you how much boost is left, but you won’t have time to look at it as this EV rockets you into the horizon.  If you’re not in Sport Boost, just ask iDrive and it will make the change for you.

The cabin is typical modern BMW elegance and luxury combined with sportiness. That includes adjustable rear bolsters and BMW’s near-signature thigh bolster adjustment. In front of the driver is a 12.3-inch configurable info display and to its right is a 14.9-inch touchscreen control display that integrates with the main screen. Anti-reflective glass means no binnacle and in multiple lighting conditions (including evening sun) it wasn’t washed out in our drive. 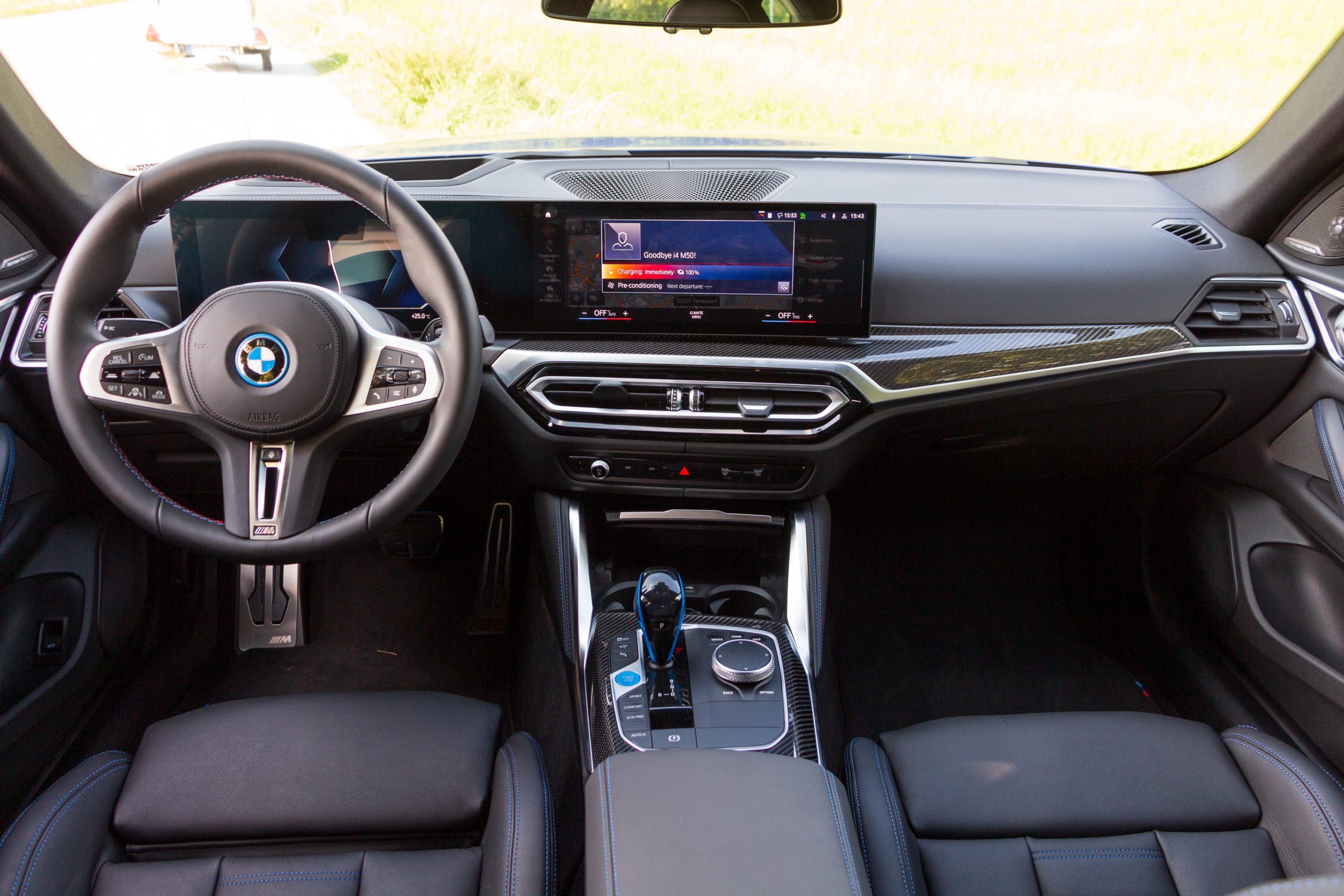 iDrive 8 in this model doesn’t have gesture control or augmented reality nav like in the iX, but it is just as smooth and responsive as it is in that SUV. BMW has greatly reduced the number of physical buttons here, but it still has a volume knob, and that’s all we need. Everything else is, yes, really, just as easy to access through the screen. We were as surprised as you are.

There are a few nods to electrification in the detailing of the car, including blue trim around the BMW roundel on the steering wheel and some more on the centre console. There are also some fun gimmicks: ask the car to tell a joke and it said I must be bored, so would I like Sport mode? I asked for one again and it acted hurt that I was bored in Sport mode, offering up the performance gauges to keep me entertained.

The Gran Coupe hatchback adds cargo utility, even if the back seat remains a bit small for tall rear-seat passengers, but that’s not really the point of a BMW with an M badge on the boot. Even an electric one. 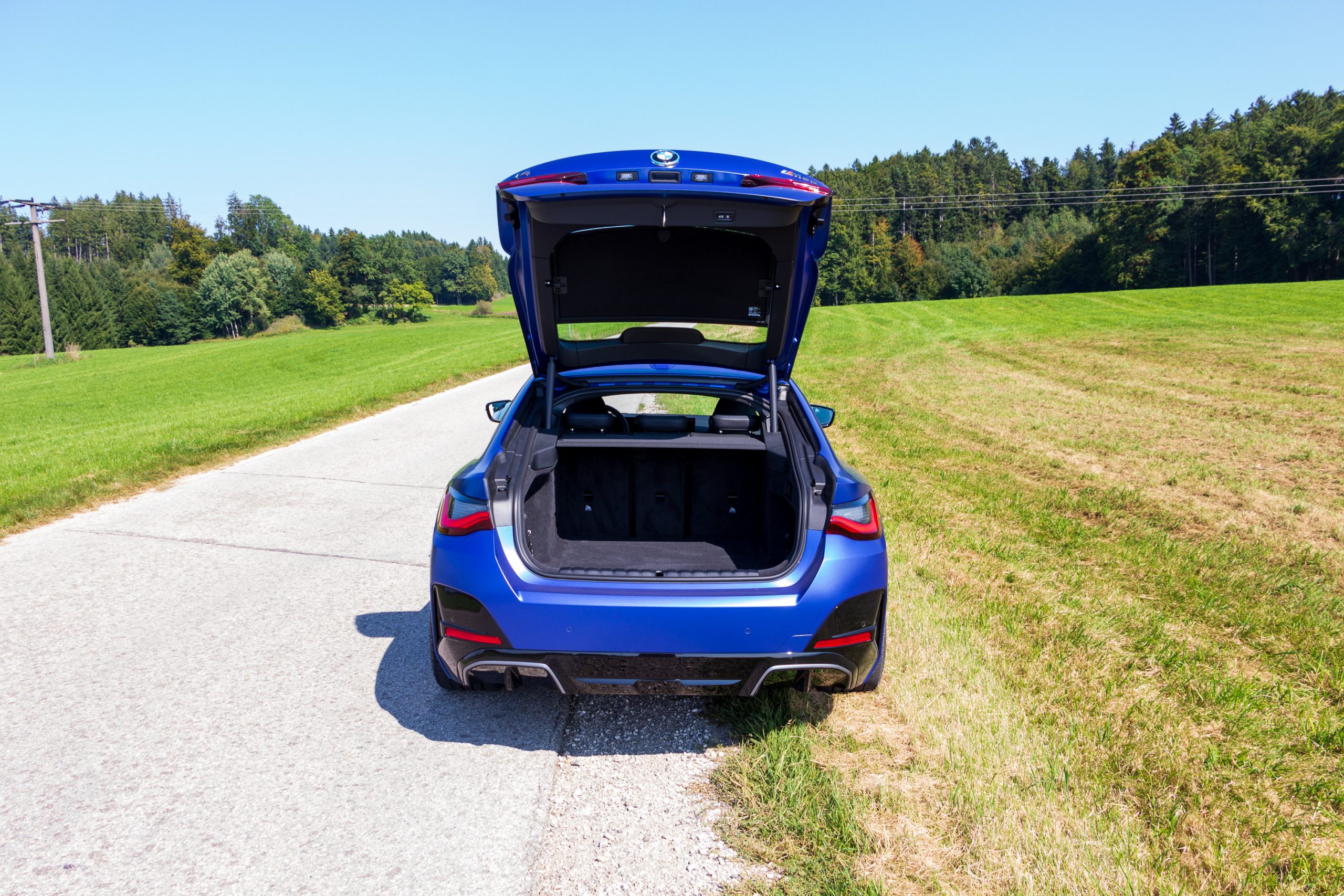 It don’t mean a thing, as they say, if it ain’t got that zing. The i4 M50 in comfort or even sport mode is quick. That’s not exactly a trick for an EV, of course, but BMW is more about how you put the power down than how much outright power it makes.

Standard adaptive suspension on this M50, even in Sport mode is almost too softly sprung and damped, despite 20-inch wheels, special roll bars and springs, and extra bracing. That is, of course, on German roads which seem to be repaved promptly if so much as a hint of a pebble appears on the surface. On Canadian roads, which are more likely to resemble goat paths than tarmac, we think it will be just right.

Turn in is M4 quick, the body feels as light as any standard 4 Series, and the car puts down the power exceptionally smoothly out of corners. Adaptive regenerative braking (up to 195 kW on the M50) brakes the car sharply coming up to those corners as well as nearing junctions without you touching a pedal. There’s also a one-pedal-drive mode if that’s more your speed.

Push the button until you find Sport Boost mode and the i4 really comes alive. It’s not any stiffer, but that extra power is always lurking, waiting for you to unleash it. When you do, the new near-actuator traction and stability control system reign it in just enough to keep you firmly in control while doing nearly nothing to stop your acceleration. It makes you look like a better driver than you are, and we can’t think of a gas car that comes anywhere close to this level of control from its electronic systems.

Of course, you can turn that system off if you’re not on a narrow public road. There is also a launch control mode that gives you the full eyeball-reshaping EV acceleration experience to repeat over and over again.

The Hans Zimmer soundtrack for the car, especially in sport mode, is a treat and does help you engage a bit more with what would otherwise be a nearly silent experience. We don’t think you need it, though. This electric Bavarian is so quick, so responsive, and so engaging on its own as we wind through the German Alps that we didn’t even notice the lack of combustion noise. 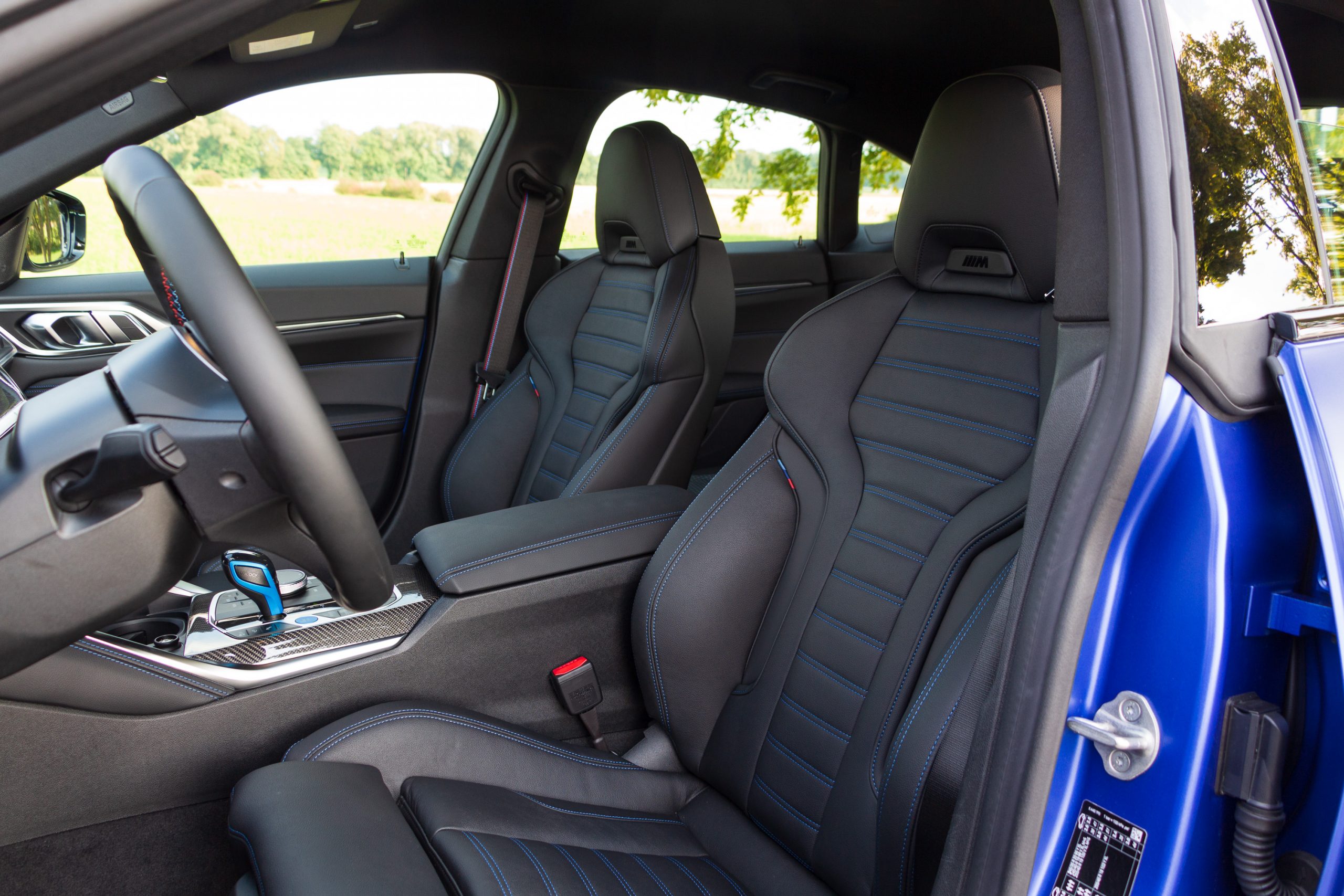 We spent just one fleeting afternoon in the German Alps in the i4 M50, but in that setting, it felt as much of a driver’s car as anything to wear a 4 Series badge to date. No, it doesn’t have the fingertip steering feel of a 1990s Bimmer, but in 2021, this is as close as you’ll find to those golden-age classics. The electric sports sedan is here, and we welcome it with open arms, as should both driving enthusiasts and tech pioneers. It’s set to arrive on sale here in Q1 of 2022, from $54,990 for the 409 and $72,990 for the M50 model.

The post FIRST DRIVE: 2022 BMW i4 appeared first on WHEELS.ca.