Montebello, QC – It’s easy to say that Subaru’s Forester becomes just a little wilder for 2022, with the addition of a new Forester Wilderness model, receiving a very similar combination of extra ground clearance, lower body protection and copper visual cues similar to that which debuted with the Subaru Outback Wilderness in the fall.

But if you look at the entire refreshed 2022 Forester lineup, there’s more conservatism than wildness in its overall compact SUV offerings: it’s the same engine, same full-time all-wheel drive system, and largely the same upright traditional styling that the fifth generation Forester continued when it debuted for model year 2019, outside of some new styling tweaks.

Still, Subaru bravely set us up with lots of challenging off-road driving time in the Laurentians in both the Wilderness and the Premier model, over a full day of on-road and off-road testing, wandering back trails that likely see more ATVs than road vehicles. It would be a challenging circuit for any compact SUV, and at least twice I was glad for the extra underbody protection that comes standard in the Forester Wilderness, covering the engine and rear differential, with one for the transmission a dealer-installed option. 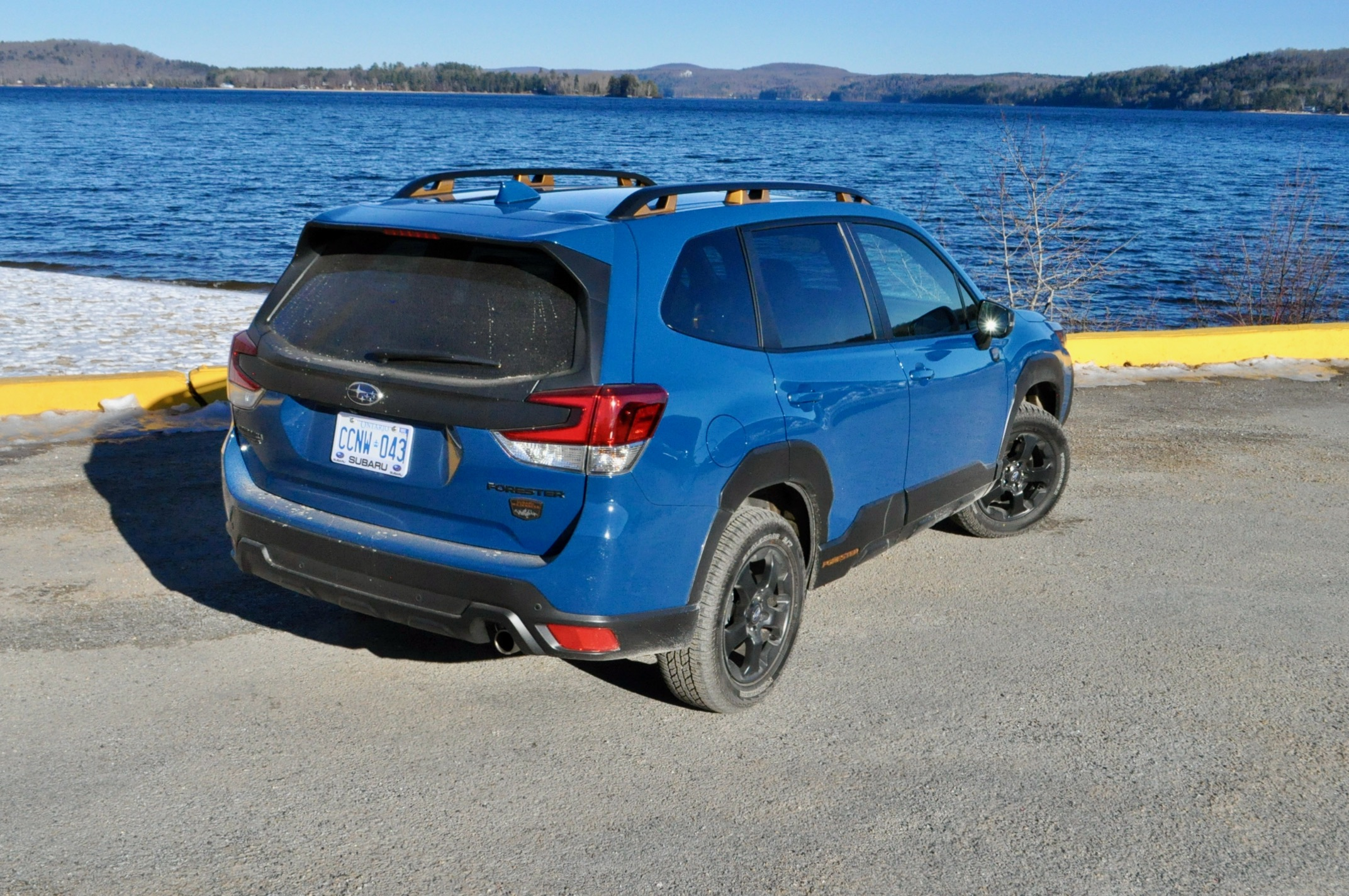 The extra black plastic cladding along the wheel wheels and all lower body panels of the Wilderness model are also somewhat reassuring as you hear stones come up that could potentially mar your nice metallic paint, whether off-road or on the highway.

The Wilderness sits 20 millimetres higher than a regular Forester, but the skidplates trade roughly half that ground clearance advantage for their extra protection. This may make the Forester slightly easier to climb into for some buyers, but it also means there’s also a big black gap between the top of the tires and the wheel well that makes it look like it’s always on its tippy toes.

Those tires on the Wilderness are Yokohama Geolander All-Terrain winter-rated boots, which means that these snowflake-equipped tires could be used year-round in jurisdictions that mandate winter tires, such as Quebec. That’s a nice perk for a vehicle that starts at $38,995. 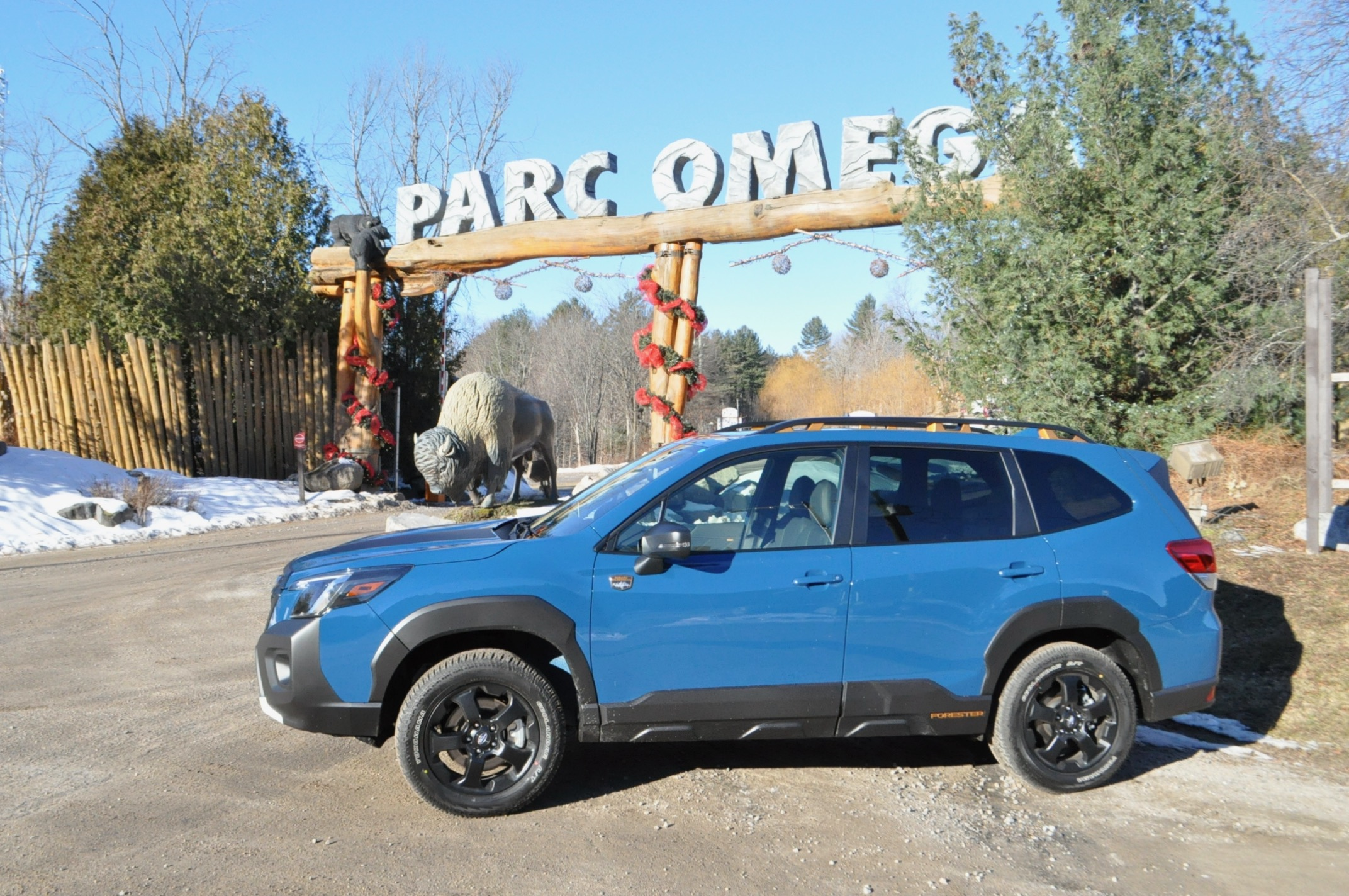 The combination of the taller body and all-terrain tires did make the Forester Wilderness a touch more motion sensitive than the top $40,595 Premier model on the road, in high-speed braking as well as on highway off-ramps. Even though the Premier was the more composed and quiet of the two, both models drove with composure and refinement that was somewhat comforting in its familiarity.

This familiar feeling was reinforced by its traditional yet super-user-friendly interior. Yes, these higher models have a large touchscreen. But they also have a steering wheel with buttons specifically designed to be used easily only by feel.

Headroom is abundant in all models, as is cargo room (762 litres with the seats up), both helped by the Forester’s traditionally boxy but handy shape. There are also two new cargo hooks at the back of the roof, which can hold up to three kilograms each. Sadly, these don’t include a a digital rearview mirror to help see behind you if you actually load any wet or dirty gear onto these hooks as intended.

These upper models also include gesture control to set the temperature up or down a couple degrees: hold your hand up and open in front of the dash for it to increase, and in a closed fist for it to decrease. A neat party trick, but one that’ll rarely be used when the actual temperature is so easily changed with a button poke. 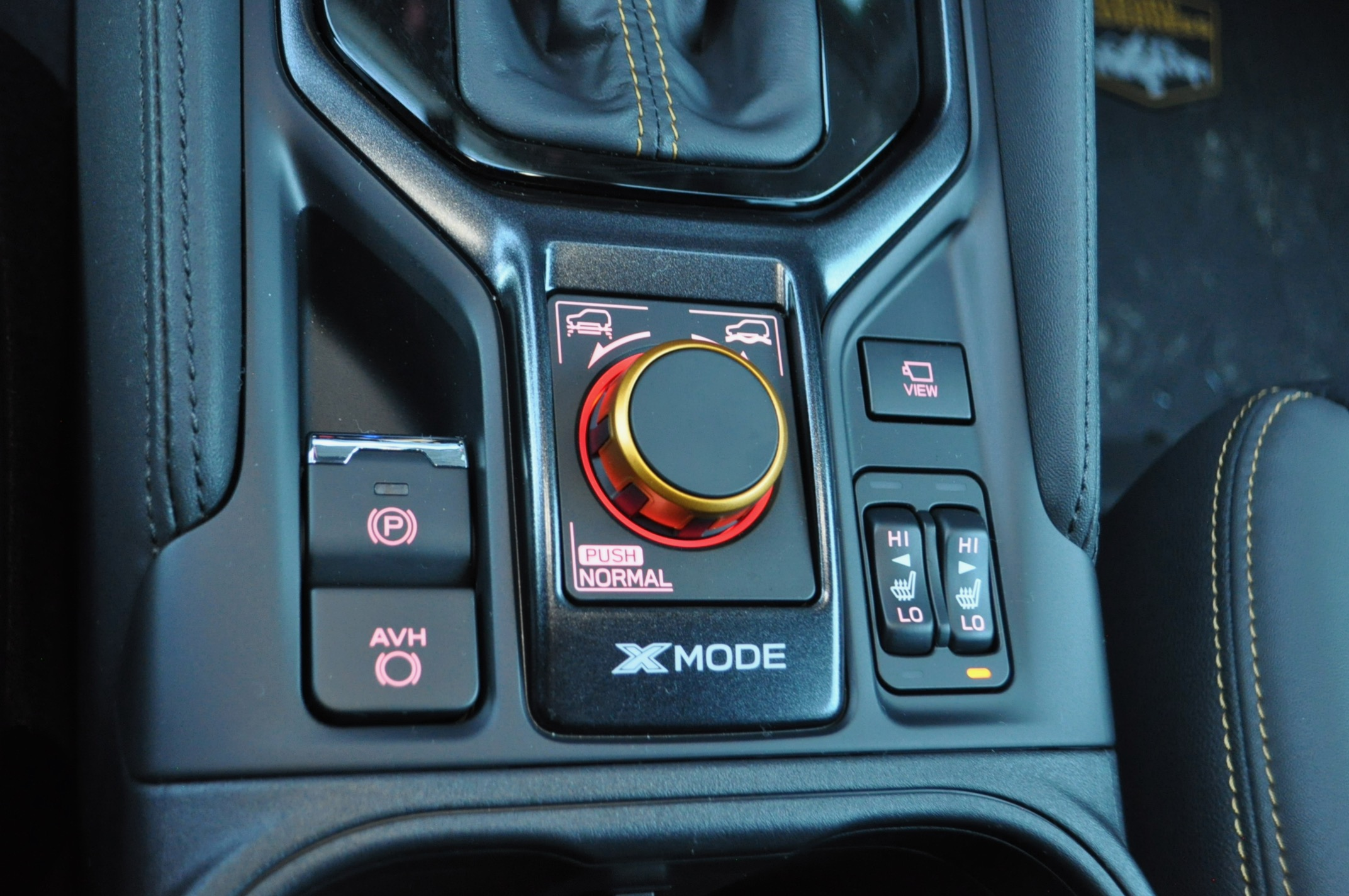 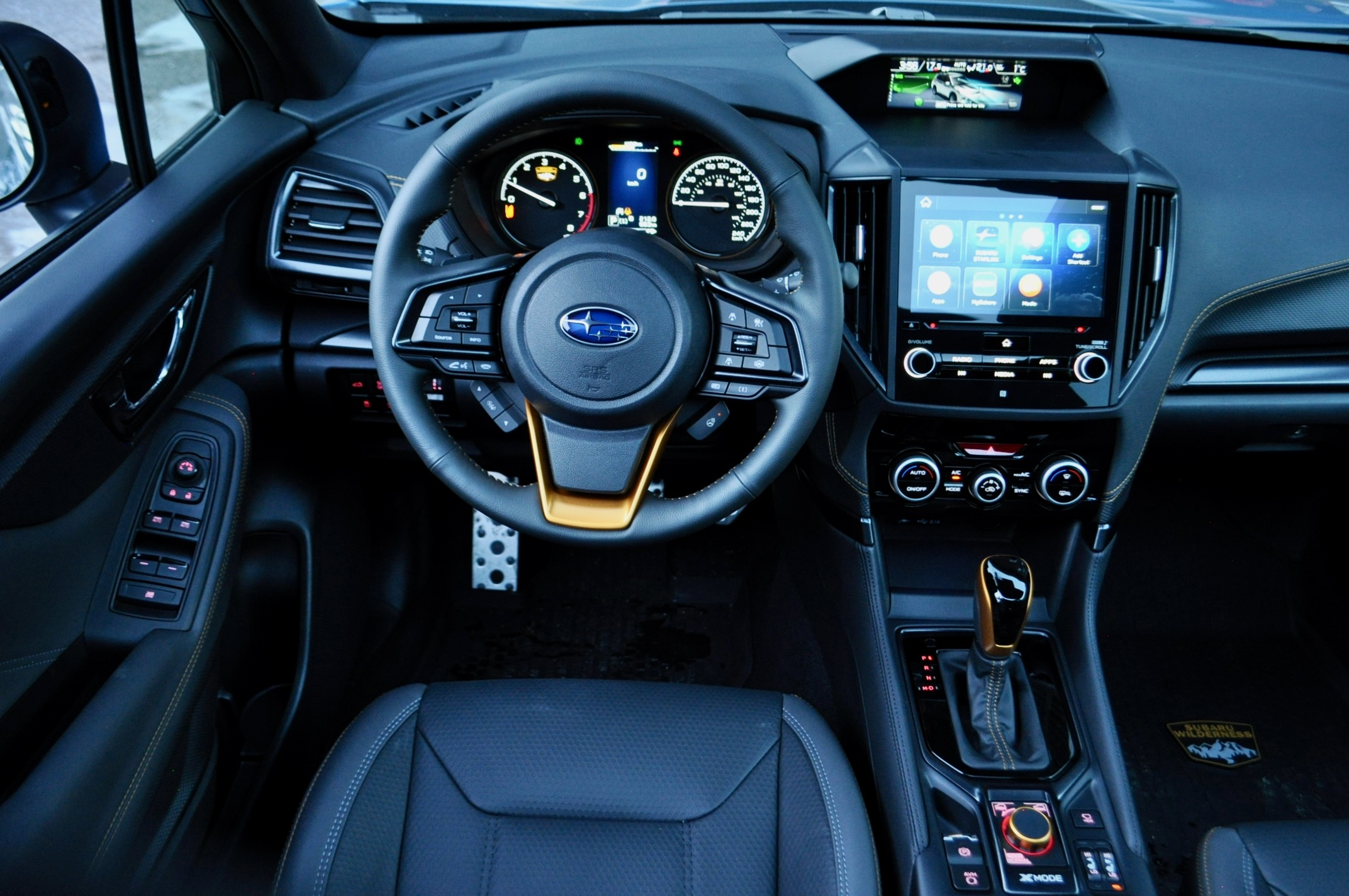 True Forester aficionados will spot new bumper, grille, headlight and wheel treatments even on non-Wilderness models. Also new in the Premier is an available lovely two-tone brown and black leather interior treatment, which made the Wilderness seem stark inside once you jumped back in it – even with the Wilderness model’s signature orange-yellow accents inside (Subaru calls this colour ‘anodized copper,’ but it’s really more a metallic orange than anything else). 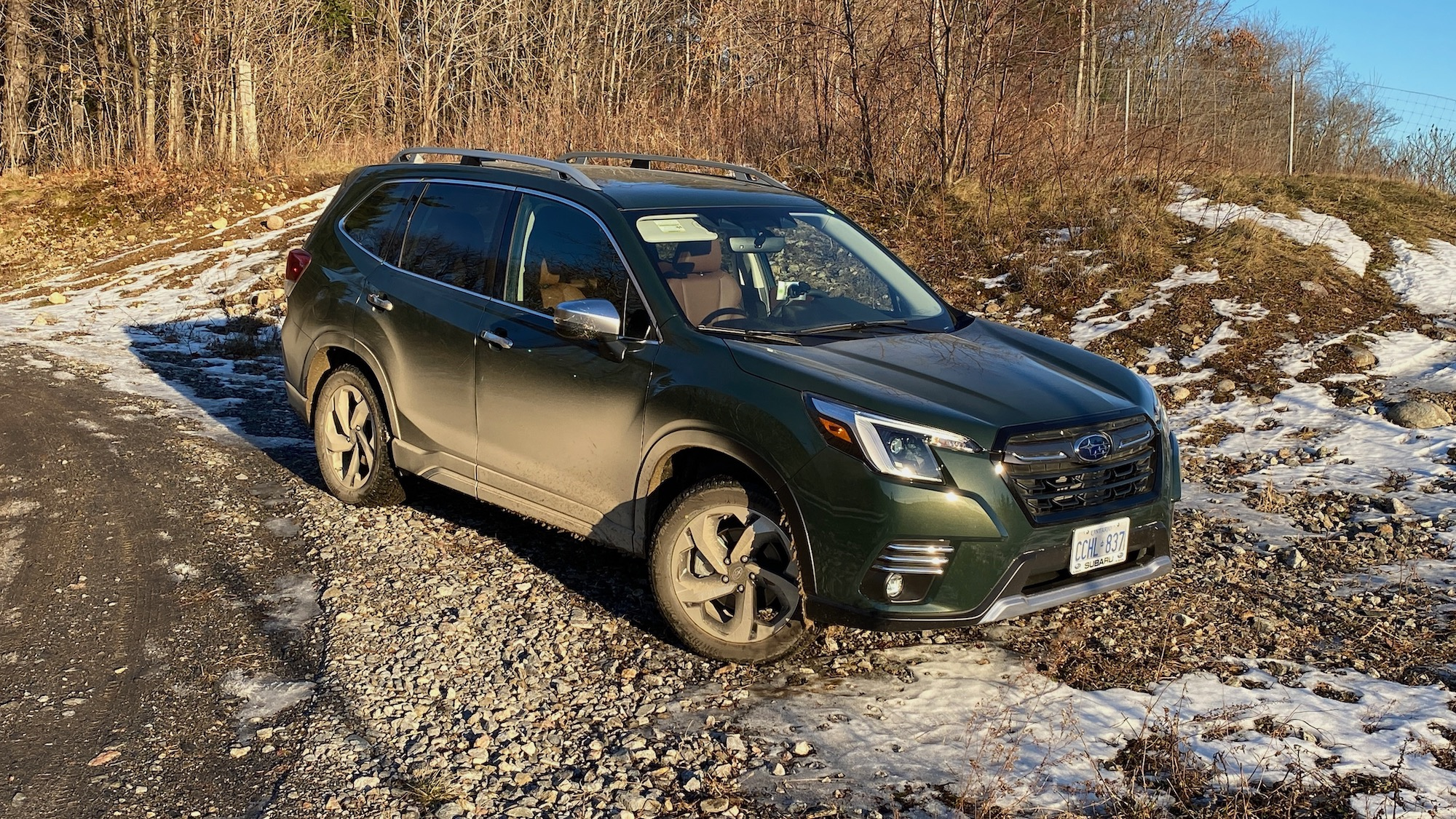 All of this is meant for the Wilderness to take on the growing number of outdoorsy versions of other compact crossover rivals, such as the Toyota RAV4 TRD Off-Road, the Ford Bronco Sport Badlands, and the Jeep Cherokee Trailhawk, as well as a number of night/black editions with less outdoorsy ambitions.

There’s no mechanical differences under the hood, with all Forester models carrying over the 182 hp 2.5-litre horizontally opposed four-cylinder engine. And unlike an increasing number of Forester rivals, there’s still no electric version available, no plug-in hybrid or even hybrid variant offered.

And some traditional Subaru fans may be pleased to hear this.

After all, there’s no doubt that Subaru has garnered a well-earned reputation for reliability, which at least in part has come from Subaru’s conservative use of new technology. And some buyers may want a vehicle that they know can be fixed by any licensed mechanic as one experienced tester in our group noted, especially if they’re on a long trip in the middle of nowhere.

Personally, I’m less impressed with this lack of engine options, and its so-so fuel efficiency that’s in the cards every time one needs to fill up (rated officially at 8.2 L/100km overall in the regular Forester, 9.0 in the Wilderness, though it was much thirstier than that during our testing on the dash readings). And there’s no turbo model or major power here, which is saved for the larger Outback crossover or WRX models now.

On the plus side, the Wilderness does offer up to 3,000 pounds of towing ability, which is double the capacity of other Forester models. Plus the Forester’s is a long-time safety star, garnering Top Safety Pick status for the past 15 years by the Insurance Institute of Highway Safety, including its highest Pick+ status for 2021 (a mark Subaru expects the Forester to receive again when tested for 2022).

Overall, the 2022 Forester adds onto its traditional AWD, adventure-ready and safety strengths, especially with the new Wilderness model, which adds some visual pizzazz to the Forester’s boxy but practical overall personality.