Yes, Ford has used the Maverick nameplate before, and no, this isn’t that.

The 2022 Ford Maverick isn’t a successor to the ubiquitous Falcon-derived sedan and coupe from the 1970s, but rather an all-new unibody compact pick-up truck that comes with a standard gas-hybrid powertrain that, according to Ford, delivers better fuel consumption than a Honda Civic.

When it was first revealed last month, I was struck by not only how small it was, but how Ford’s thinking has seemingly changed 180 degrees from a mere half-decade ago when company executives and spokespeople were adamant that the only Ford truck for North America was the F-150.

Then the mid-size Ranger returned in 2019, and two years later the Blue Oval is about to appear on a third truck line, this one even smaller than the last. How times change, eh?

At any rate, the Maverick will go on sale this fall as a 2022, and to get the word out, Ford of Canada invited a handful of journalists to pore over a pre-production model sent to their press fleet management office in Mississauga. 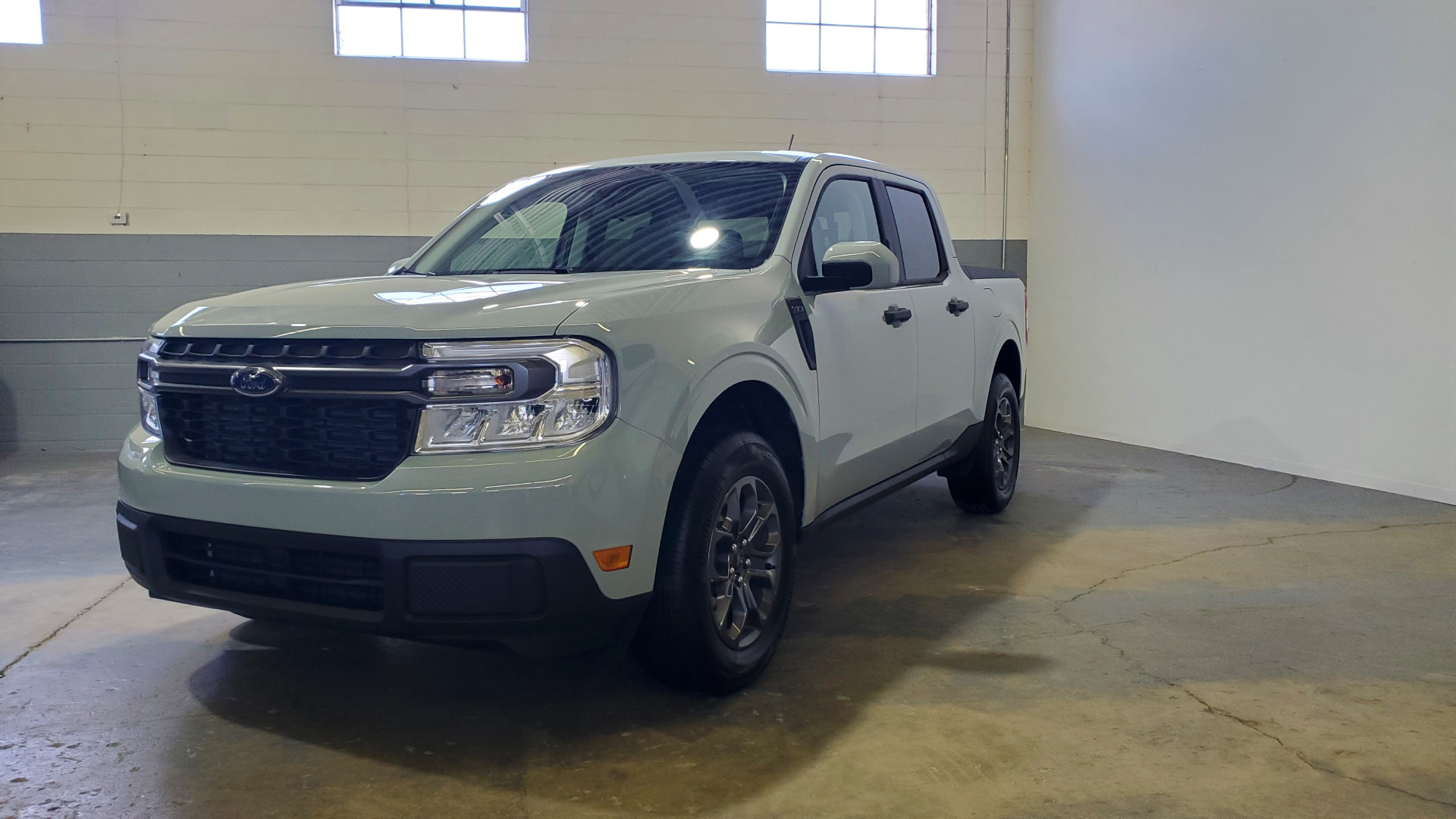 I wasn’t allowed to drive it, but Ford gave me about an hour to photograph, sit in and fiddle with this pre-prod until I had my fill. I was permitted to start it up, which I did a couple of times. I’ll share my thoughts shortly, but first some Maverick 101.

Turbans and Motorcycles: Time for Change in Canada

The Maverick is built on a shared platform with the Escape and Bronco Sport and is built in the same Hermosillo, Mexico plant as the latter. It is by far the smallest pick-up Ford has ever built, riding on a wheelbase that is 144 mm (5.7 inches) shorter than the mid-size Ranger, with a length that is 281 mm (11 inches) shorter overall. It is also quite a bit narrower (335 mm / 14 inches) and lower (61 mm / 2.4 inches) than the Ranger.

In terms of powertrains, the Maverick is a standard hybrid, but with a gas option. The base engine is a 2.5-litre Atkinson Cycle four-cylinder combined with an electric motor that produces 191 horsepower and 155 lb-ft. of torque. This engine is paired with an electronic CVT that drives the front wheels only. 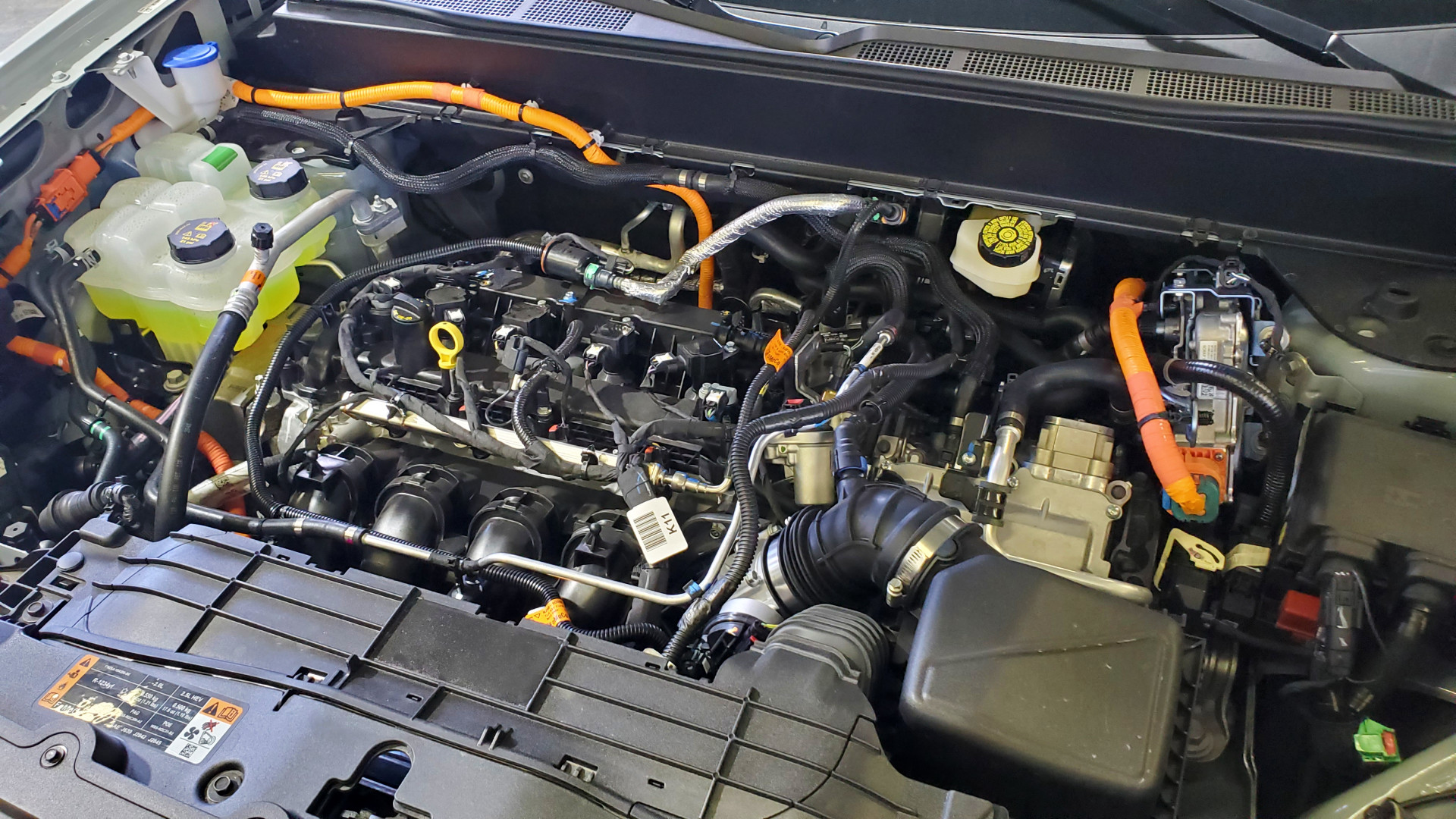 For those wanting more power, a 2.0-litre EcoBoost four-cylinder is available as an option. It’s rated at 250 hp / 277 lb-ft of torque and is paired with an 8-speed automatic transmission and all-wheel drive. The payload rating is the same as the 2.5-litre, but towing can double to 4,000 pounds when equipped with the optional 4K Tow Package. Fuel consumption ratings for this powertrain haven’t been released.

Ford is targeting younger buyers with the Maverick – makers and doers, the company says – so technology and versatility are prominent here.

Valentino Rossi: Motorcycling legend rides off into the sunset

For example, the cabin comes with a standard eight-inch multimedia touchscreen with Apple CarPlay and Android Auto support, along with FordPass Connect with embedded modem and Wi-Fi that can run up to 10 devices. The FordPass smartphone app can also locate help users locate their truck, check fuel status, unlock doors and start up or shut the engine off. 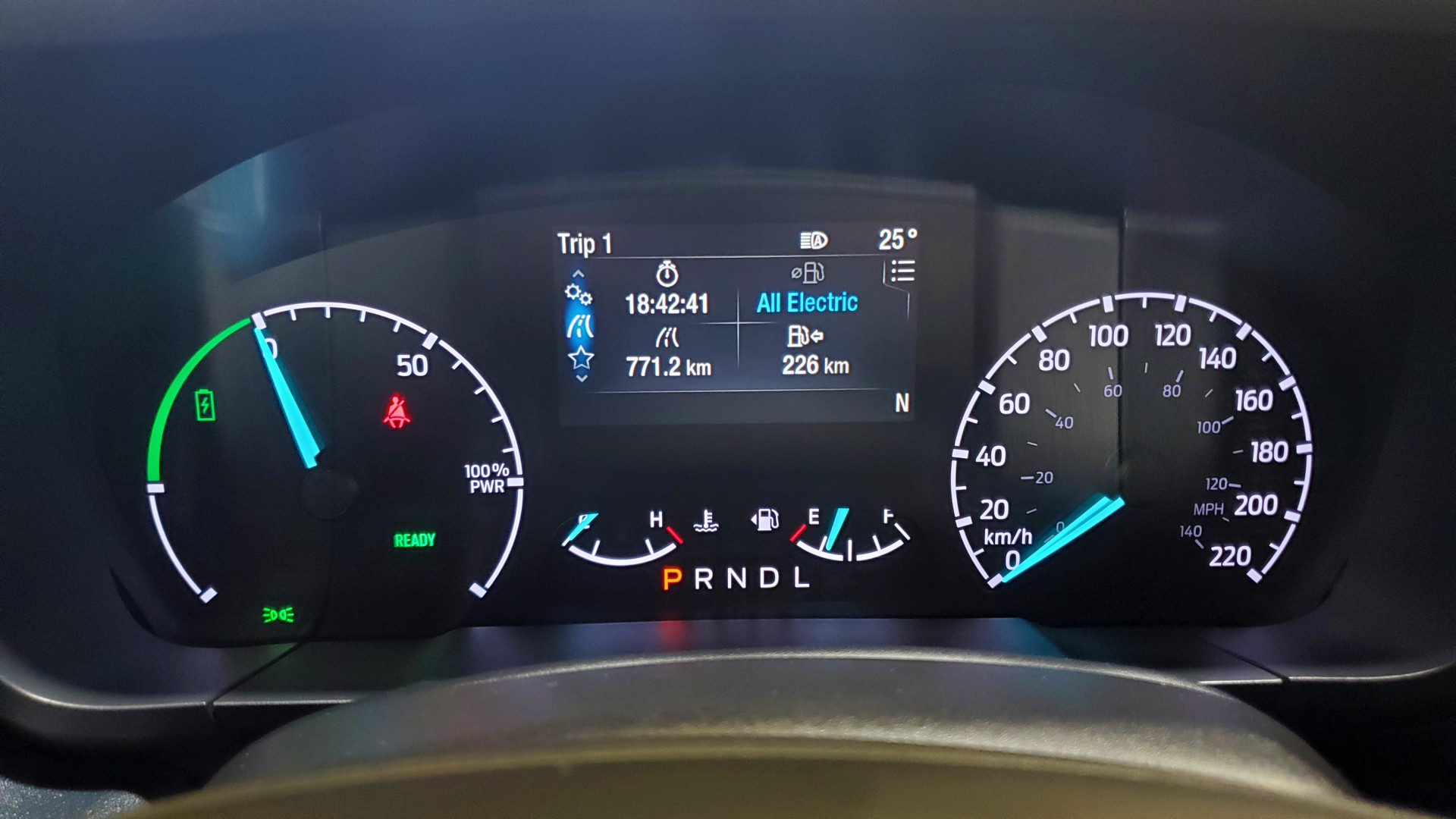 On the versatility front, there are some innovative design ideas at work both inside and out. In the cabin, the Maverick has storage cubbies and bins that the Maverick design teams says is based on how people use the items they bring to the truck.

This means door armrests with a split design that can accommodate a one-litre water bottle standing upright, and door pockets that can swallow a laptop. A storage bin under the rear seat can store a laptop, shopping bags, tools and even a fully inflated volleyball. I also noted the rubberized orange trim inserts in the centre console can easily be removed for cleaning.

In the bed, or FLEXBED as it’s called, Ford has engineered several storage / cargo options. Users can divide the space into segments like elevated floors by sliding 2x4s or 2x6s into slots that are stamped into the sides of the bed. The bed also comes with two tie-downs and four D-rings for securing cargo, along with a 12-volt outlet. The Maverick can also be equipped with two 110-volt 400-watt outlets, with one located in the cabin and one in the bed.

Nio likely for right-hand drive as ET7 confirmed for 2022 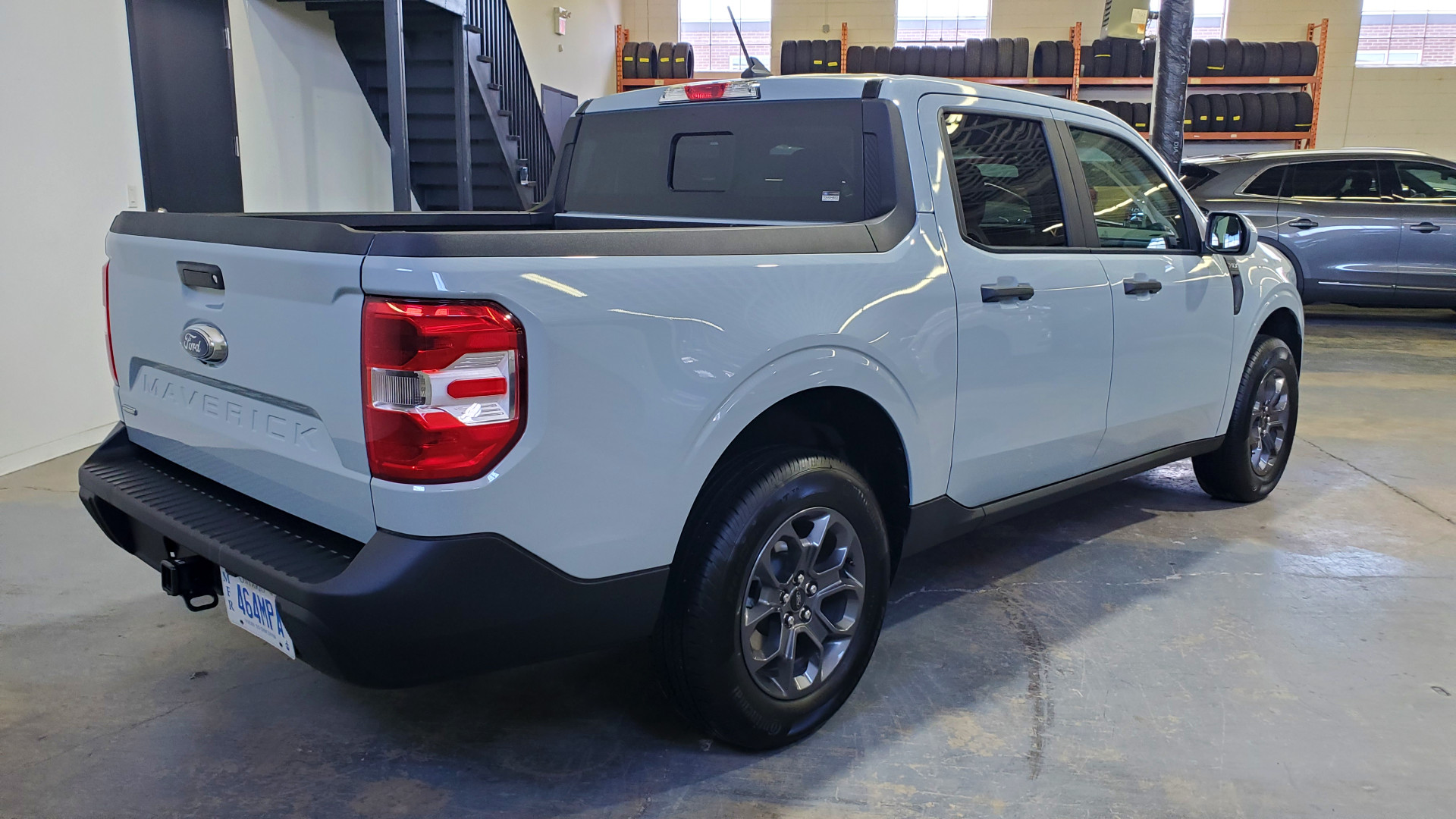 In terms of size, the FLEXBED is 4.5 feet long and the 1,500-pound payload is equivalent to approximately 37 bags of 40-pound mulch, according to Ford. Oversize items can also be carried, thanks to a multi-position tailgate that can open fully, or halfway (by unclipping support cables and hooking them on to the latch pins) which Ford says will allow the Maverick’s bed and wheelhouses to support 18 sheets of 4×8 ¾-inch plywood without having to lie them on an angle.

Despite its small dimensions, the Maverick feels quite roomy inside, and its two-tone interior with removable orange trim bits and loads of storage seems is both stylish and well-suited to buyers with loads of stuff to cart around. The rear seat feels spacious too, but is probably better suited to two adults, not three.

I dig the Maverick’s square-ish, Tonka-toy design that includes standard LED headlights, a large grille and dark grey 17-inch wheels (18-inchers are available). It looks like a Ford truck, but with a more youthful and attainable aesthetic, which I think could resonate with younger buyers.

Available in XL, XLT (shown) and Lariat grades, the 2022 Maverick goes on sale this fall, and starts at $25,900. An FX4 off-road package is available for AWD XLT and Lariat grades, and a Maverick First Edition package with unique cosmetic details is being offered as a first year only option. The build and price tool, along with ordering, is live now at  Ford.ca.