As the curtain came off the 2022 Toyota Tundra at its Canadian premiere, a lone voice echoed from the back of the room: “Finally!”

No one else said it, but we were all thinking it. Toyota hasn’t given the Tundra a full redesign in 14 years, making this introduction of its third generation one of 2021’s most hotly anticipated new vehicle launches.

Toyota has big aspirations for its full-size truck with designs on doubling its market share in Canada. Here’s what we know so far.

If you’re a V8-or-nothing truck owner, the new Tundra isn’t for you. If you’re willing to have an open mind, read on.

The 2022 Tundra will have two powertrain options. The first is a 3.5-litre twin-turbocharged V6 producing 389 horsepower and 479 lb-ft of torque – impressive ratings for a base engine on their own. The second is this same engine with a mild-hybrid system, which integrates a motor generator with a clutch mounted in the bell housing between the engine and the standard 10-speed automatic transmission. Combined, this system creates 437 hp and 583 lb-ft of torque that peaks at 2,400 r.p.m. With the electric motor on board to boost available torque at lower speeds, the result should be a truck that feels ready to rumble through its entire rev range.

Volkswagen ID.X concept: is this the GTI of tomorrow?

What this system doesn’t do is power one’s house in an outage or run like a generator as is seen in the Ford F-150 Powerboost hybrid. The development team considered adding this capability but found it couldn’t be applied for less than the cost of a standalone generator, which they felt made the increased cost outweigh the potential benefits. 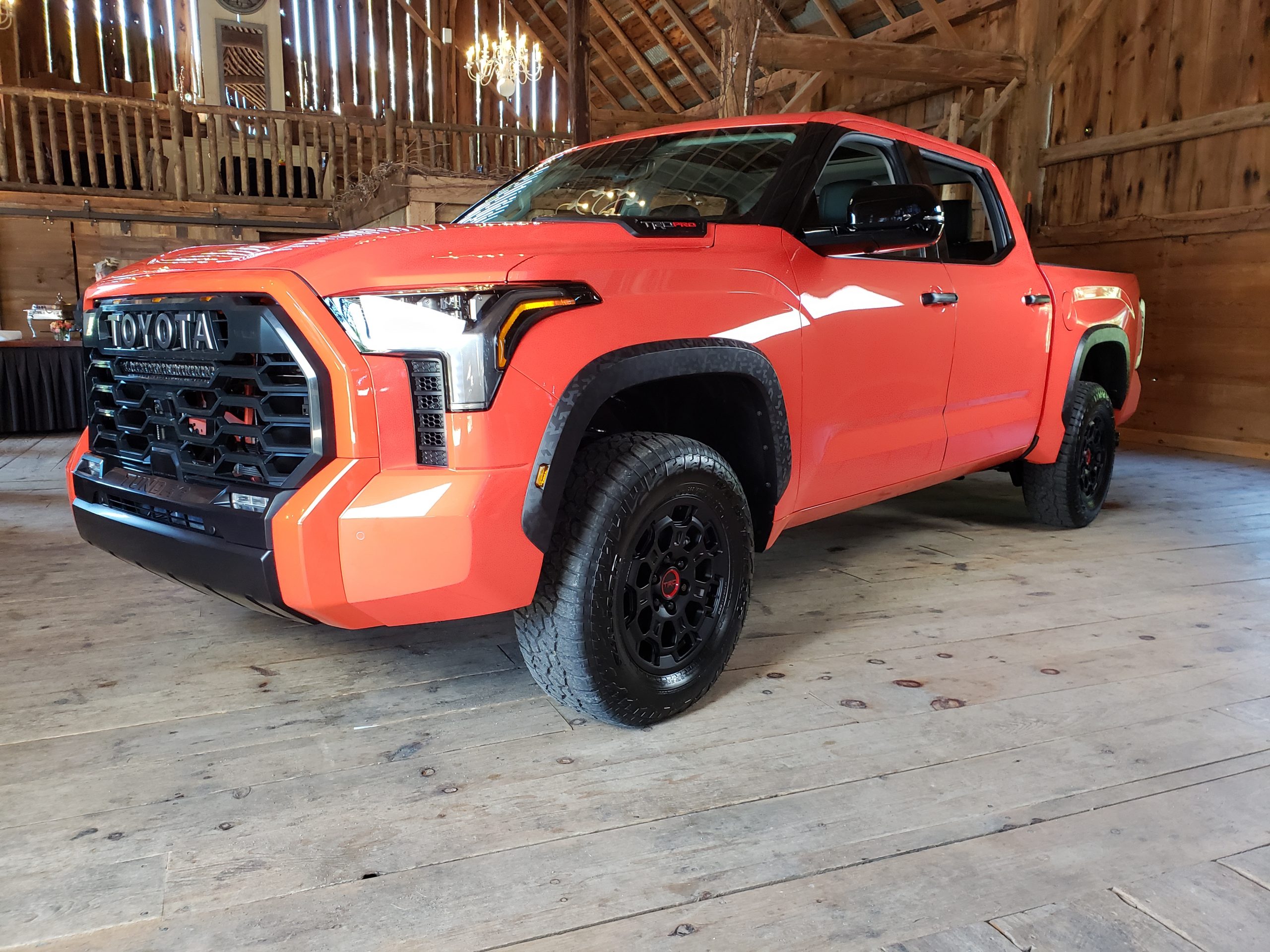 The new Tundra features a fully boxed high-strength steel-ladder frame that’s wider than that of the previous generation, plus a redesigned multi-link rear suspension and an aluminum-reinforced composite bed that Toyota says will be more durable than full aluminum and less prone to rust than steel. Through these updates, the new Tundra has a peak towing capacity of 5,440 kilograms (12,000 pounds), and a maximum payload capacity of 880 kilograms (1,940 pounds). Though these are not best-in-class, they represent significant increases over the previous-generation Tundra of 17.6 percent and 11 percent respectively. A self-steering reverse assist feature, extended trailer blind-spot monitoring and adjusted response rates for the adaptive cruise control and emergency braking functions are designed to make towing life easier.

The Tundra is lighter overall due to use of aluminum in the hood and front doors, and the tailgate’s weight has also been reduced. Stability is also bolstered with a new double-wishbone front suspension, standard twin-tube shocks upgraded to monotube Bilstein shocks on Off-road grades or 2.5-inch Fox shocks on TRD Pro, and an available leveling function or an adaptive variable suspension. 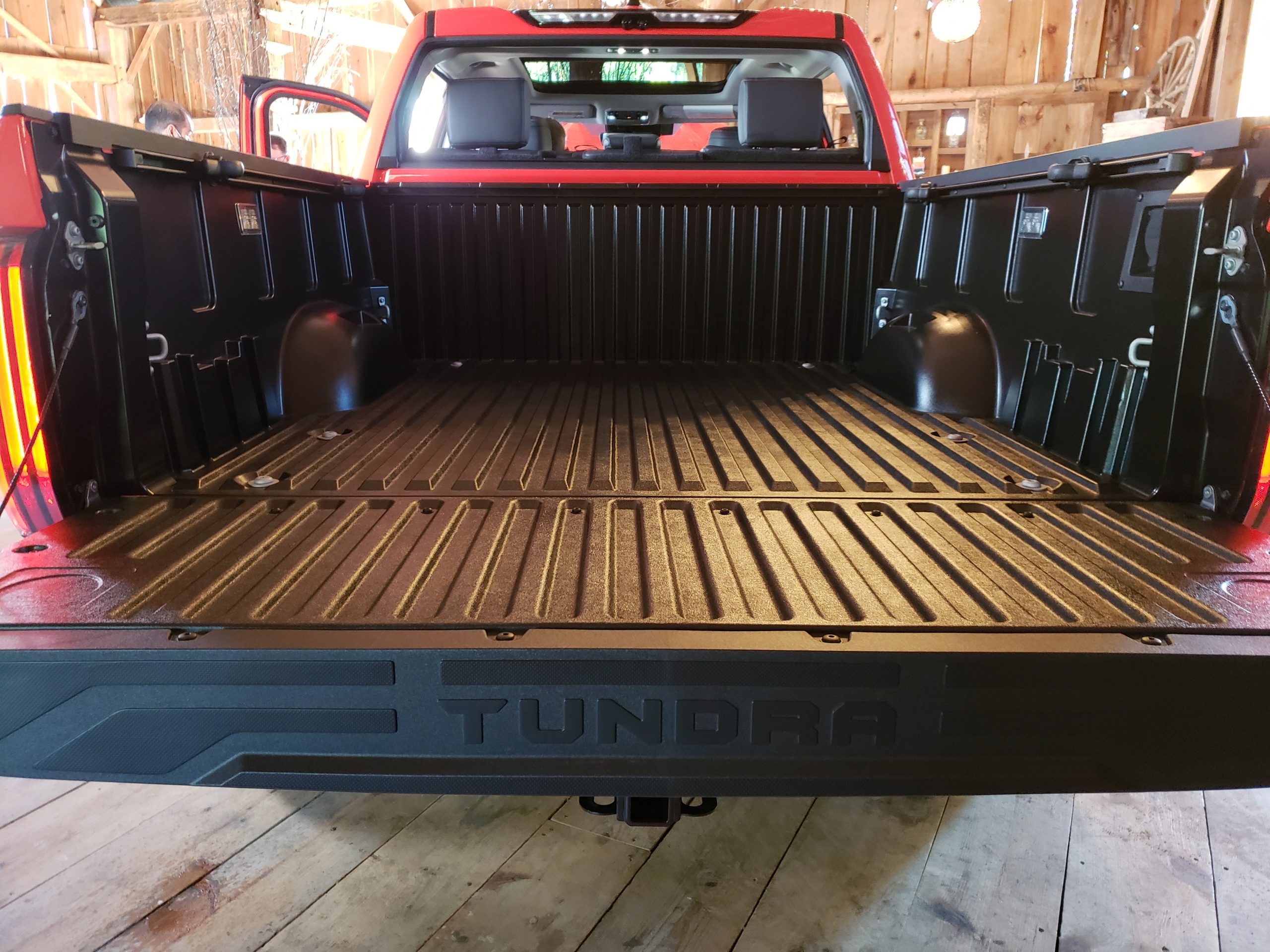 Double-cab and Crewmax four-door cab configurations will be offered with three different bed lengths available: 5.5-foot, 6.5-foot, and 8.1-foot, the latter being available only with the double-cab. An available power step tucks in under the rear bumper. LED bed lighting and adjustable rail-mounted D-hooks are available.

The two Tundra models we were able to examine on first look are the TRD Pro and TRD Off-road. Both are pre-production models; the TRD Pro we saw was close to production-spec, while the Off-road was an earlier prototype with some unfinished surfaces.

Still, we saw enough to get an idea of some of the aesthetic upgrades, which include a standard knockout-style finish on the A-pillars to give the roof a floating look, trim-specific grilles, and textured wheel arches. The TRD Pro gets its own look through a dual exhaust and an exclusive paint colour dubbed Solar Octane.

Interior updates include an available 14-inch touchscreen with a new multimedia system and wireless Android Auto and Apple CarPlay, 12.3-inch digital instrument cluster, and a fully retracting rear window. The driver’s seat now has 24 per cent more travel, and the leather upholstery on the TRD Pro has a cool and subtle camouflage effect that’s not obvious when looking head-on but becomes visible when viewing it from an angle. 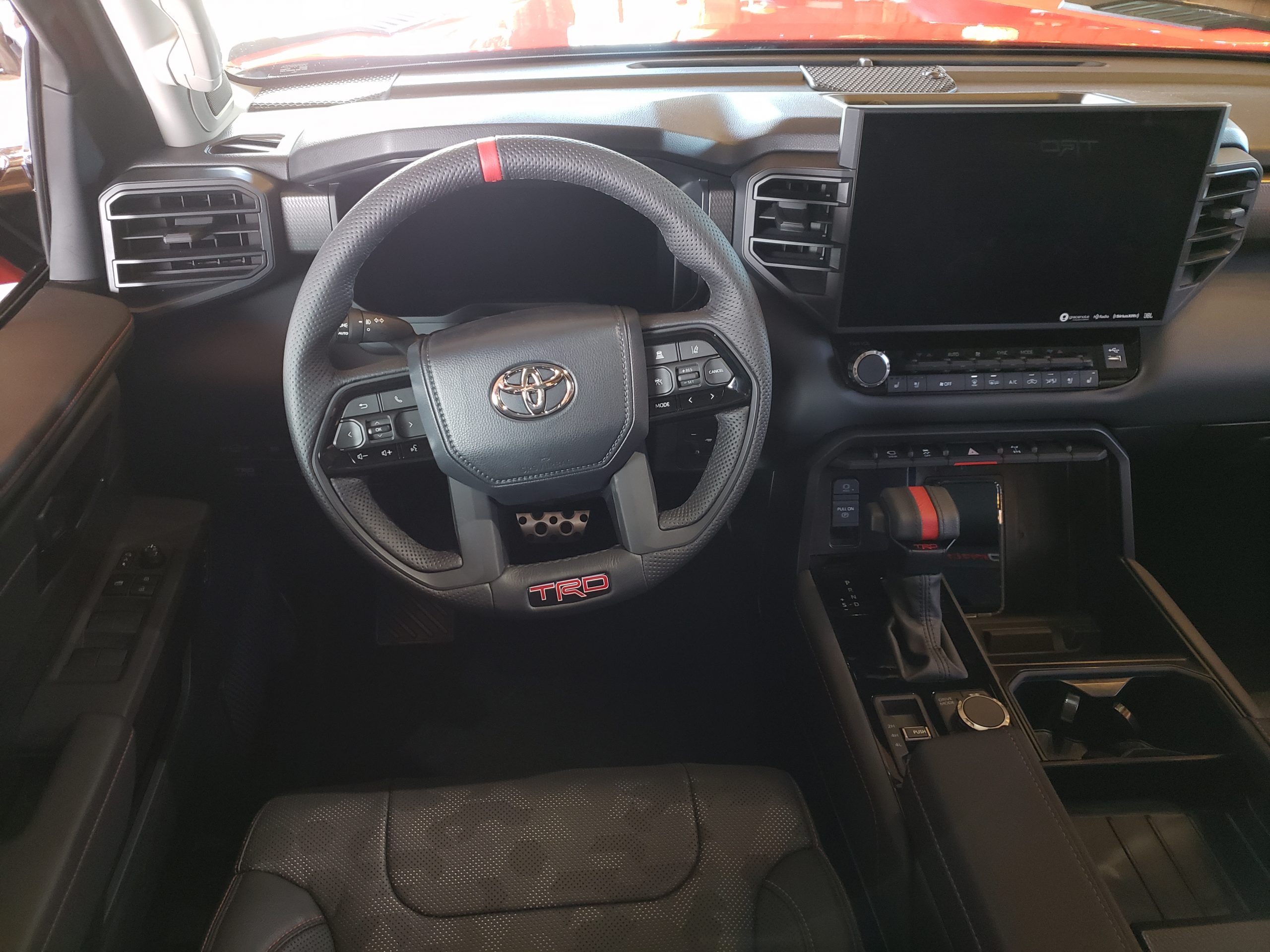 The 2022 Toyota Tundra will arrive in Canadian dealerships in late 2021. Pricing will be announced closer to the launch date.

The writer attended this event as a guest of the automaker. Content and vehicle evaluations were not subject to approval.