Over the past year, a lot of car owners have felt particularly grateful for their set of wheels. It has helped them make grocery store runs, get to doctor’s appointments, and to escape the work-from-home lifestyle for a few hours by transporting them to a nearby conservation area or provincial park.

That’s the sentiment behind an age-old tradition in the Roman Catholic Church of blessing forms of transportation, including automobiles — a practice that is still alive and well in our modern-day world.

“It’s a logical extension of the church’s tradition of blessing things,” said Rev. Séamus Hogan, associate professor of church history at St. Augustine’s Seminary in Scarborough. Blessings are part of the Catholic faith and culture, which includes blessings in three main categories: people, places and things (both religious and secular). Cars fall under the category of ‘things,’ along with other modes of transit such as bicycles, motorcycles, trucks, boats and planes.

“Cars are important in people’s lives. We spend so much time in them and they’re so critical in our lives, so it makes sense,” said Hogan. “You want to be safe when you travel as well.”

Prior to the pandemic, “probably every weekend I’d be blessing a vehicle,” he said, adding it can be done at any parish, by any priest. “If they have holy water, they can do it.” But, he joked, “we don’t rotate tires or do oil changes.”

The process is straightforward: A person can either make an appointment or approach their priest after Sunday mass and ask to have their car blessed. The church has an official “Book of Blessings” with nearly 900 pages and 71 chapters that include words of blessing for pretty much anything you can think of — including one specific to cars. The blessing is recited, and the priest then sprinkles the car with holy water.

There are a few reasons for blessings, from invoking protection to appreciating the holiness of life. For example, on Palm Sunday (the Sunday before Easter), palm fronds are blessed with holy water. In October, people might have their pets blessed during the Feast of St. Francis of Assisi, the church’s patron saint of animals and the environment.

“What the church wants to show people is life is sacred and there are so many beautiful things worth celebrating. I think that’s part of the point of blessing cars,” Hogan said. “I (always) emphasize that now that the car is blessed, it’s not just meant to be something you use for yourself. It’s something meant to be used for others: helping neighbours, driving courteously, being patient.” 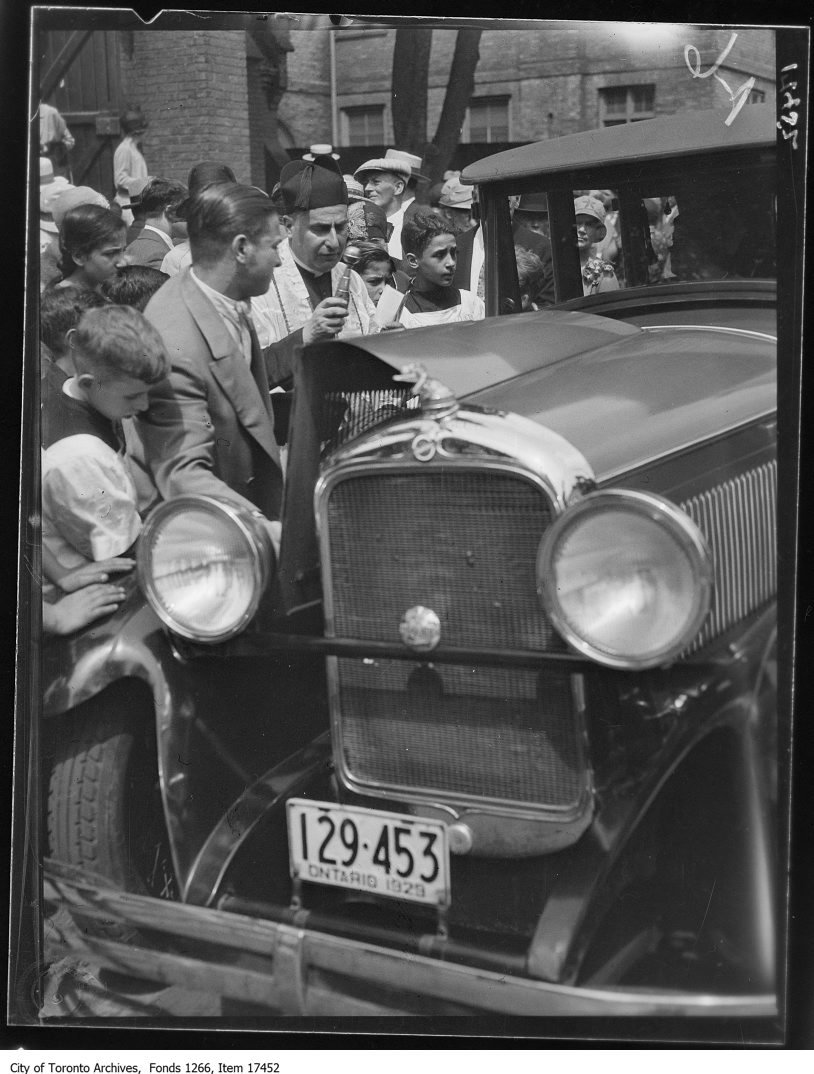 That might mean helping to drive an elderly neighbour to appointments or the grocery store, something that many have been doing during the pandemic. “You can actually use your car to be holier, so I think that’s part of what we do when we bless cars,” Hogan said. “It’s done to protect you and also to help others.”

It’s also a reminder to be patient with other drivers and not give in to road rage. “You can ground yourself in that and remind yourself that this vehicle is set aside to be used for good things, to be used in a positive way,” he said.

While there are no precise records, it’s likely that the blessing of cars has taken place since the advent of the automobile — the continuation of a long history of blessings.

“I speculate that the notion of blessing cars in the Roman Catholic Christian tradition has roots in the Middle Ages, when priests perhaps blessed earlier forms of transport — horses, ships — as part of the divine protection sought for pilgrims to the Holy Land venturing on long, perilous journeys across land and water through disease- and brigand-infested parts of Europe and the Mediterranean,” said Jamie S. Scott, a professor in the Department of Humanities at York University.

How Do I … Properly Install a Rear-facing Car Seat

Scott, who has a PhD in Religion and Literature from the University of Chicago, said this type of ritual occurs in several traditions, including Buddhist, Sufi Muslim and Japanese Shinto, among others.

The blessing of transportation also has a history in Canada. Saint Joseph’s Oratory of Mount Royal in Montreal, for example, started blessing bicycles in 1949 and motorcycles in 1983, both of which became annual events. The Oratory later instituted a blessing of cars — specifically for Mustangs — in 1999 (though other cars, including Corvettes and Beetles, were eventually added).

While blessings can give drivers peace of mind, “unfortunately,” said Hogan, “a car blessing doesn’t lower your insurance rates.”