A month or so ago, I pulled into the parking lot of a Longo’s food store and watched as a woman backed her car into the side of another. This was not a light tap; she was still accelerating when the collision happened. She finally stopped, moved forward to disentangle her car from the victim’s (which was up on two wheels), and drove right out of the lot and onto the street.

I followed her out and suggested to my wife that she take a picture of the licence plate. When the driver saw me right on her tail, and my wife click-clicking away on her cellphone, she did a U-turn and drove back into the parking lot. I parked and a young man, who had seen what happened, was in the process of calling the police. I gave him my card and went shopping.

I saw him inside the store later.

“She said she hadn’t been drinking,” he said, “but that she was wearing a new perfume. If you got close enough to her, she said it made you think that she’d been drinking.”

I asked if he’d reached the police. He said he had but that he didn’t have a lot of time and Longo’s employees had become involved by that time anyway.

Now, I have no idea whether the police arrived or whether the woman had been drinking. I do know this: it would have been a hit-and-run if I hadn’t come along at that point. She was taking off. And the woman’s excuse that her perfume made her smell of alcohol was unique but hardly believable.

I was talking about this with OPP Sgt. Kerry Schmidt. Schmidt is the best-known cop in the GTHA because if there’s a big ka-boomer on one of the roads around here, he drives to the scene and often delivers a live report on radio and TV. He shocked me when he told me that despite all the R.I.D.E. programs and awareness programs and efforts by organizations like M.A.D.D., impaired driving cases are up. Way up. In fact, they’re up 14 per cent, year over year.

“We’ve had 29 people killed and 2,000 crashes that were alcohol-related already this year,” Schmidt said. And why is this?

“Because the restaurants are back open after the COVID-19 lockdowns,” he said, “and people are drinking and driving. They’re clamouring to get back out there and have fun and they’re getting carried away.”

That seems to be the case in Toronto, too. In late November, police scooped more than 20 people who were impaired and – get this – eight of them were so drunk they were passed out behind the wheel.

So, the question has to be asked: how do you get the message across that drinking and driving is dangerous, not to mention stupid. As a friend said to me the other day, “After everything we’ve been through, the PR campaigns and the tragedies, I’m surprised it’s still happening. But as Jerry Jeff Walker sang in a song back in the Sixties, you sometimes have to hit somebody across the forehead with a two-by-four in order to get their attention.”

I’m not even sure that would work these days. So what to do?

What are the chances of being pulled over? Not many. The police can’t be everywhere. And we’ve all seen this: there’s a R.I.D.E. program operating up ahead and there are drivers doing U-turns to avoid it. Schmidt says the incidents of drinking and driving are up 14 per cent but it’s probably higher – if there was a way of trapping those drivers from escaping.

Sad to say, our justice system isn’t much of a deterrent. A guy named Marco Muzzo was drunk and killed three children, and their grandfather, and seriously injured two other adults. That happened in 2015. He had day parole by 2020 and received full parole this February. Not exactly hard time for wiping out a family. 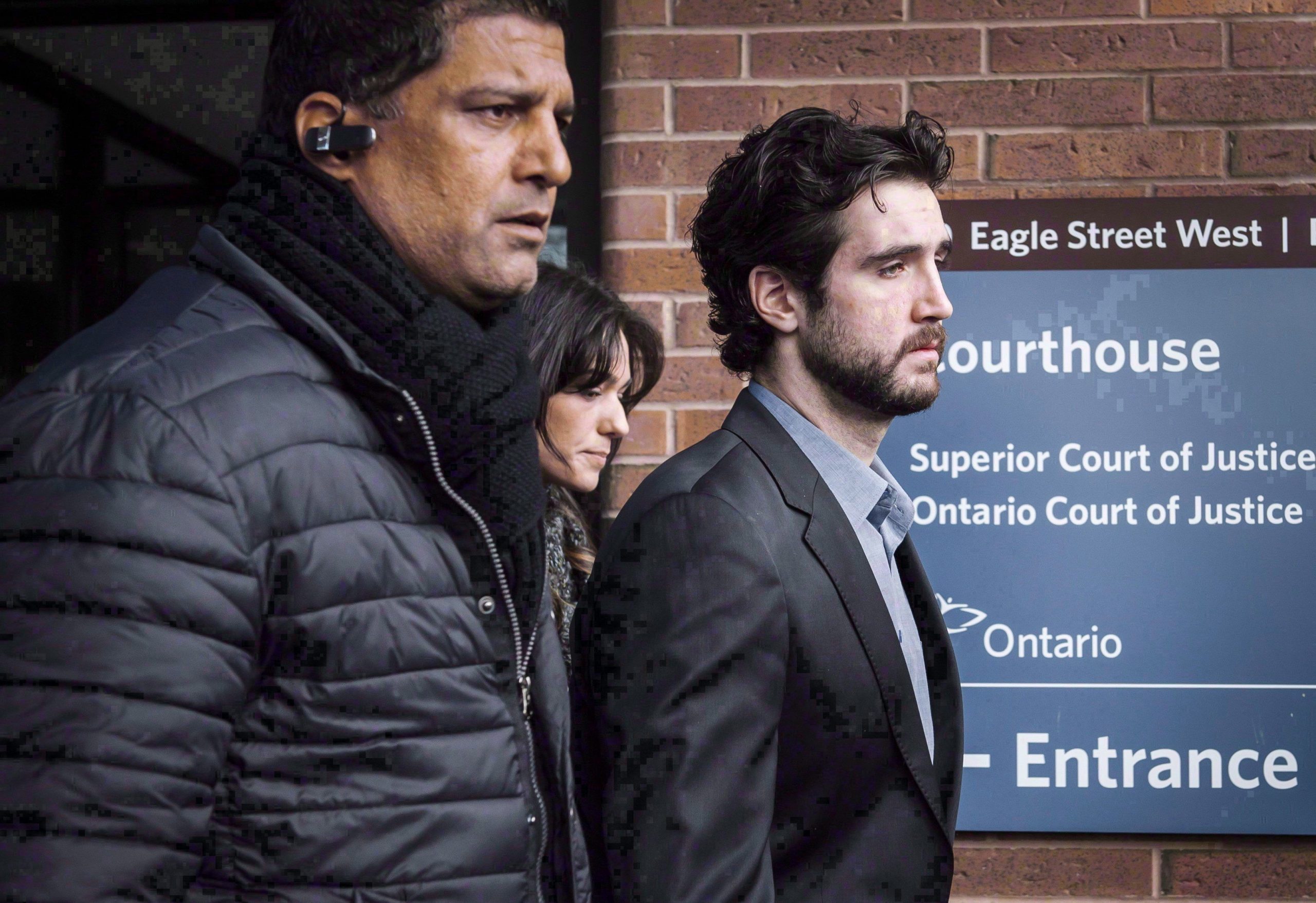 Marco Muzzo, right, leaves the Newmarket courthouse surrounded by family, on February 4, 2016. Muzzo, sentenced to 10 years in prison after pleading guilty in a drunk driving crash north of Toronto that killed three young children and their grandfather, will be eligible to apply for day parole next month. THE CANADIAN PRESS/Christopher Katsarov

So here is my suggestion: public embarrassment.

For years, community newspapers just about everywhere on the continent would publish, once a week, a list of court news. Careless driving, shoplifting, other minor thefts – what have you. Small stuff. But I can tell you, from personal experience, that people are petrified to have their name in the court news in the paper. Petrified. Sure, a guy like Muzzo has to expect that. I mean, kill four people and that is not easily swept under the rug. But law-abiding people with a reputation to protect – a service club president, a curling champion, a church elder – are beside themselves knowing that their community will soon find out about their transgression, whatever it is.

Sometimes, people can cover things up. I had a friend once who was sentenced to jail for 90 days. He took all his holidays and time-in-the-bank (instead of being paid money for overtime), got a doctor to give him a note saying he had to take a month or six weeks off because of stress, called in sick a couple of times during this ruse and nobody saw him for those 90 days. And nobody (except me and a few others, who figured it out) was ever the wiser. But if his name had been in the paper, or on the paper’s website, there would have been nowhere to hide.

When I was an editor in Kingston — one of the few remaining papers to publish an In The Courts column — I would be visited by people pleading with me not to publish their names. Their pleas were falling on deaf ears but the sense of panic they were feeling was real.

It’s worth a try. Nothing else has worked.

Norris McDonald, a past Wheels editor in chief, covers the Canadian automotive and global racing scene for the Star. He is a member of the Canadian Motorsport Hall of Fame.   or follow him on Twitter @NorrisMcDonald2.

The post Let’s use public embarrassment as a way to curb drinking and driving  appeared first on WHEELS.ca.