Formula Electric, known as Formula E, is casting about for a place to race in Canada.

It had its first chance in Montreal in 2017. The mayor of the day, Denis Coderre, rolled out the red carpet. Formula E wants only to race on city streets, so it turned up its nose at racing on the city’s permanent Grand Prix course on the Ilse Notre-Dame. Coderre said okay and agreed to block off many of the streets in downtown Montreal, which angered the people who live there.

He signed a contract agreeing to pay the series $24 million over six years, plus expenses, to show up. He paved the streets so the formula cars could race on a smooth surface. By the time F-E left town, $6.2 million earmarked for suppliers hadn’t been paid and a line of credit had been tapped into for $9.5 million.

Coderre was soundly defeated in that autumn’s municipal election, which was fought, in large part, over the Formula E race. But the new mayor, Valerie Plante, had no idea how deep the damage ran. She nearly suffered a breakdown when she discovered Montreal was on the hook for $35 million to bring Formula E back to the city in 2018.

Take a hike, she said. We have a contract, F-E said. They are still arguing in court.

Meantime, like F1, Formula E is trying to get a foothold in every important country in the world and Canada is on that list. Vancouver was interested for awhile, but has since cooled to the idea for two reasons – downtown Vancouver is so built up it would be difficult to find a place to hold a race and, second, they don’t want to have to spend the money.

Toronto is back on the list now. In 2019, when first approached, the city said it was interested but made it clear that it didn’t want to invest the money necessary. Formula E, however, will not take no for an answer and is back, taking another shot.

You can’t blame them. Bernie Ecclestone got away with murder for years when it came to Formula One. He would point out that, other than the Olympics, F1 racing generates more economic activity for a city than any other sport or pastime. (It’s true: the Grand Prix is the biggest festival in Montreal every summer – bigger than the jazz festival or the comedy festival or any of the others.) Millions watch the sport in person and on television (race day attendance is always more than 100,000 and the 2005 Grand Prix attracted 51 million worldwide, a record for a car race).

That’s why Bernie could say to Montreal (and other locales): “We need better garages and permanent hospitality suites and you had better agree to build them or we will take this race and put it somewhere where they are more than willing to ante up.” And that’s why Montreal spent $40-plus million on new digs for the 2019 race: to keep Bernie happy.

Can Formula E convince Toronto to get into the electric car game? Possibly – but what about the Honda Indy? The Indy pays Toronto. Toronto would have to pay Formula E. But F-E is the series of the future.

We should all be curious about which way the city might go on this one.

Jimmie Johnson started his first race in the NTT IndyCar Series Sunday and must have thought he was still racing in NASCAR. Halfway around the first lap, defending series champion Josef Newgarden lost control and before you knew it we had a Big One. Nobody was hurt but there was a lot of property damage.

The race had a surprise winner, Alex Pallou (pictured, above), and veterans Will Power and Scott Dixon showed there was life in the old boys yet. Canadians James Hinchcliffe of Oakville and Dalton Kellett of Stouffville started on the last row and were both caught up in the first lap wreck, although both were able to continue, finishing 17th and 18th.

For a complete story on the race, please click here

There was some great racing in the Grand Prix at Imola. Max Verstappen qualified third in his Red Bull and was in first place exiting the first corner. He gave Lewis Hamilton a taste of his own medicine by pushing him off the circuit at Turn One. Later in the race, Hamilton showed why he’s a seven-time world champion by going off course, backing up until he could get turned around (as a friend of mine said, he’s not of this world; everybody else would try to drive out and wind up getting stuck) and then fighting his way back up to finish second, about 20 seconds behind Max. Lando Norris finished third for McLaren.

And then there was some less-than-stellar driving. Our Nicholas Latifi slid off a wet track on the opening lap but managed to keep his car running. He went back onto the track and drove right into the path of Russian Nikita Mazepin. Latifi’s car was too badly damaged to continue. Too bad; he’d had his best start – 14th – since joining Formula One.

Our Lance Stroll finished seventh but was penalized five seconds for passing while off course and that dropped him to eighth place. He has five points after two races. Latifi, who owned up for all his miscues, has still to score his first world championship point.

Before I give you the link, I have never in my racing life seen brakes catch fire. Both Aston Martins had this happen and while the team was able to get Stroll ready for the start, they couldn’t finish up Sebastian Vettel’s in time, so he had to start from pit lane. Then, when there was a question about the track drying and whether it was safe to switch from wets, the team called Vettel in and used him as a guinea pig before calling in Stroll. He drove a steady race – when he could.

For a complete story on the Grand Prix, please click here 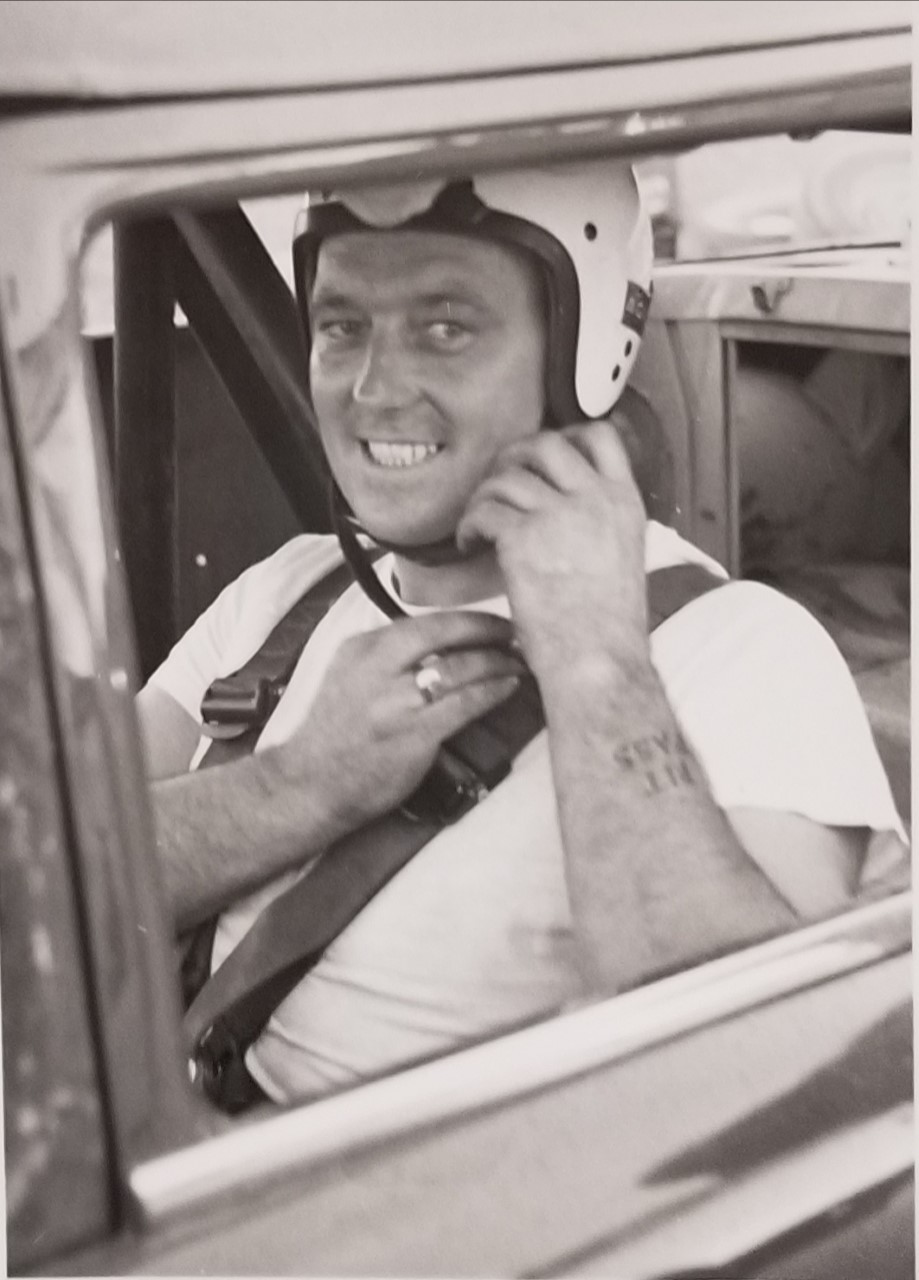 Alex Bowman won the NASCAR Cup race at Richmond, coming out of nowhere with ten laps remaining to beat Denny Hamlin. Ironically, Bowman was driving the No. 48 car that Jimmie Johnson drove for years. Johnson, of course, is a rookie in IndyCar who’s telling everybody that his real ambition his whole life was to race in IndyCar and I’m thinking if that’s true, what took him so long? Click here for a complete NASCAR story.

Dr. Sidney Mandell has died. He was a man of many interests and talents, driving racing cars being among them. He was best known for racing a Lotus back in the day at Canadian Tire Motorsport Park. He died April 1 of Parkinson’s Disease.

The great Pinecrest Speedway announcer Ernie Martin turned 90 last week. He was still talking up a storm when visited by our mutual friend Paul Madder who sent me the photo (above). Ernie went stock car racing while he was employed by the Toronto Star as a circulation rep. The Star found out and told him he could drive race cars or manage Toronto Star carriers, but he couldn’t do both. As racing was a hobby that he paid for and he was paid money by the Star to work there, Ernie chose to be paid. One Saturday night not long after, Ernie told Pinecrest promoter Cappy Smith why he was walking and Cappy said the regular announcer hadn’t shown up and could he do the job? So Ernie said he’d give it a go. During the first heat, Ernie got excited and used a swear word. Something along the lines of, “Look at that son-of-a-%$@& go!” The crowd loved it and Cappy Smith told him later that the other fellow wasn’t coming back and the announcing job was his if he wanted it. Ernie said sure and Cappy said, “By the way, if I hear you swear like that again, I’ll fire ya.” So Ernie promised never again to use an expletive deleted and he held the Pinecrest announcing job till the day the track closed. Happy Birthday Ernie and have many more.

The Return of the Roadside Motel

COVID caused the British Empire Motor Club to cancel their Spring Trophy Races at CTMP. This is not going to be a good year. I know people are complaining and wondering about places like golf courses. Like it or not, we are living under a stay-at-home order and if golf courses are open, people will leave their houses to go play, thus defeating the purpose of the exercise. Same with race tracks, speedways and so-on.

I am going to sound like a conceited Canadian here, but I don’t know why F1 is crazy to go to Miami. Miami Beach? Maybe. And some of the Keys. But Miami itself is not a very nice place.

The Montreal promoters gave it the old college try but at the end of the day there will not be a Grand Prix this year. They can promise everything under the sun, but you can’t make everybody else coming into Canada quarantine for two weeks (seven days for NHL players who are traded) and then let more than 2,000 people associated with Formula One to enter without quarantining. It just doesn’t make sense.

This is from the NHRA PR department: Back-to-back world champ Erica Enders went from almost not qualifying to collecting her first victory of the 2021 NHRA Camping World Drag Racing Series season, grabbing the Pro Stock win on Sunday at the DENSO Spark Plugs NHRA Four-Wide Nationals at The Strip at Las Vegas Motor Speedway.