But first, the sermon.

Back in the day, at speedways all over Canada and the United States, NASCAR drivers would fly in to race against the locals. They would be provided with a track’s “house” car but, even then, they usually won. They were la crème de la crème of stock car racers, guys who rode around in Gulfstream jets or Bell helicopters, racing against guys who arrived driving their tow vehicles.

Remember the night the late Bob Slack imported Dale Earnhardt to race at Cayuga (now Jukasa) Speedway? You couldn’t get near the place, so many people showed up. And the Intimidator put on a show. Nights like that, which were common, led to NASCAR’s dominance of motorsport in North America. Those drivers were out promoting themselves and their sport while many of the IndyCar and IMSA racers of the day were at their country clubs, walking around with their noses in the air.

Which brings me to this weekend at Indianapolis. Always remember, although the NTT IndyCar Series might have 17 races scheduled, there is only one that counts: the Indianapolis 500. Then there was Long Beach but another race has since snuck in there in the order of importance: the GMR Grand Prix at Indianapolis, which is now held two weeks before the 500. And the reason it’s No. 2 on the pecking order is because of one word: Indianapolis.

Little old ladies, NHL goalies, sports editors – whoever – might not know anything about auto racing (or care a whit) but mention the word “Indianapolis,” and that means “big, important, car race.”  So there is more attention paid to Indianapolis races than any of the others.

Which means that more people than usual will know that F1 reject Romain Grosjean not only won the pole for Saturday’s GMR Grand Prix but nearly went on to win the race. Which is something that I don’t think was good for IndyCar.

Now, this was a real feel-good story. Nobody deserved that second-place finish more than Grosjean. Five-and-a-half months ago, at the Bahrain Grand Prix, he survived one of the worst accidents in the history of Formula One. But his contract was up and there is no room for sentiment in that league so he either had to retire or go shopping for a ride.

He wound up in IndyCar and he’s driving for Dale Coyne. If he was driving for Penske or Ganassi, you could maybe understand what happened this weekend. But Coyne is not exactly a powerhouse, which made Grosjean’s performance even more spectacular, er, embarrassing.

In his Formula One career, Grosjean was a steady performer but he wasn’t someone who stood out. In 179 race starts, he had no wins or poles. He did score ten podiums. But he sure wasn’t Lewis Hamilton.

Remember, at the beginning, when I talked about the professionals imported to show up the local stock-car drivers? Well, that’s how I see Grosjean kicking butt at Indy. Except for Formula One, if the best open-wheel drivers anywhere are all employed in IndyCar, that should make it the best open-wheel series, right?

But if a guy who no longer has a contract in F1, and has a less-than-stellar record of 0-179 in that series, waltzes into IndyCar and in his third race for an underperforming team wins the pole and then finishes second in the race, it sure doesn’t reflect well on the series or the calibre of people racing in it.

I still like IndyCar racing above all other forms. And like many of you, I’m sure, I’m delighted for Romain. I think what happened is terrific. But I also worry about the future for IndyCar and its reputation as being the best. I’m not sure getting clocked by Grosjean is a good thing.

Was there an on-track pass for the lead in Saturday’s race? Don’t think so, but I could be corrected. There was lots of passing back in the pack but not one for the race lead, that I can remember. In any event, 20-year-old Rinus VeeKaywon his first race in the Big League Saturday, defeating Grosjean by 4.510 seconds. Alex Palou, who won his first win at the Honda Grand Prix of Alabama, finished third Saturday with Josef Newgarden fourth and Graham Rahal fifth. Please click here for a complete story on the race.

I know Conor Daly’s sponsor for Saturday’s race was undoubtedly the manufacturer of a diabetes blood-sugar measuring device but the words on the sidepods of his car were a little disconcerting: “Too many pricks.” They might want to rethink that.

Although they haven’t made the announcement yet, the replacement for the Honda Indy Toronto will be the Mid-Ohio Sports Car Course. Kevin Savoree and Kim Green, who promote the Honda Indy in Toronto, own Mid-Ohio. They already own and promote one IndyCar race there. I’m sure they’ve got room for two.

Once upon a time, the Indy cars and drivers spent May in Indianapolis. Hence, “the month” of May, or just “the month.” The racers used to race to be the first car on track on May 1. In fact, some used to push their car out to the edge of the track surface and then sleep in the cockpit so that no one would dare move them out of the way. That was then; “the month” is now really just two weeks, or “half a month.” But “the month” has become part of the race’s lexicon. When Colts quarterback Carson Wentz gave the pre-race command on Saturday, he urged everybody to “get the month going,” and for the drivers to start engines. He wasn’t the only one who did that . . .

Toyota 4Runner: A mid-size truck that fits all

As mentioned, James Hinchcliffe of Oakville made his 150th start in the IndyCar Series Saturday. From Newman-Haas, to Andretti Autosport, to Schmidt-Peterson (Arrow came later) and back to Andretti, he’s had a good career, winning six races, one pole and landing on the podium 17 times. That pole, incidentally, came in the 2016 Indianapolis 500, a year after he nearly bled to death in a freak accident at the Speedway. He qualified 22th for the Grand Prix, finishing 18th. He had this to say afterward:

“Today we had a pretty good pace with the Capstone 29 Honda but the way the race played out with yellows, the strategy options were pretty limited. We picked up a couple of spots and were able to run pretty competitive lap times in comparison with our teammates. But starting where we did, that was kind of all we had. It was nice to get that one under our belt and get May in Indy kicked off. Now we’re focused on the 500.”

The other Canadian, Dalton Kellett of Stouffville, qualified 24th and finished 20th: “The first race for the ‘Month of May’ is all wrapped up. P20 for the No. 4 K-Line Chevy. Not exactly where we wanted to end up. The balance was okay but as the track rubbered up and the stints went on, we were struggling with more and more understeer so just trying to adapt to that and use our tools to keep on top of the tires. Our consistency was better, and we were making moves from where we started so that was good. It’s always an exciting race here, the first lap action is pretty fun. We didn’t really get any yellows (after the first one). Once we got out in clean air and running by myself, I was trying to be consistent hitting my marks and making sure we were on our fuel number. I think I learned some valuable stuff and I’m looking forward to coming back in a couple of days and going the other way.”

Am I the only one who sees a direct link between the poorly attended double-header IndyCar races at Texas Motor Speedway and the sudden retirement of track President and General Manager Eddie Gossage? Eddie is one of the good guys in motorsport and has been a great friend of IndyCar racing over the years. But from a great beginning in 1997 when the IRL first ran at Texas to several weeks ago, the crowds have been getting smaller and smaller, despite what Eddie did. When the late Dan Wheldon and Danica Patrick got into a post-race argument in 2012, Eddied promoted the upcoming IndyCar race at Texas as a UFC fight between the two. It was pretty much all for naught. Speedway Motorsports (the Smiths) are always happy when they’re making gobs of cash, but one slip and you can be on thin ice. Ask Humpy Wheeler about that. 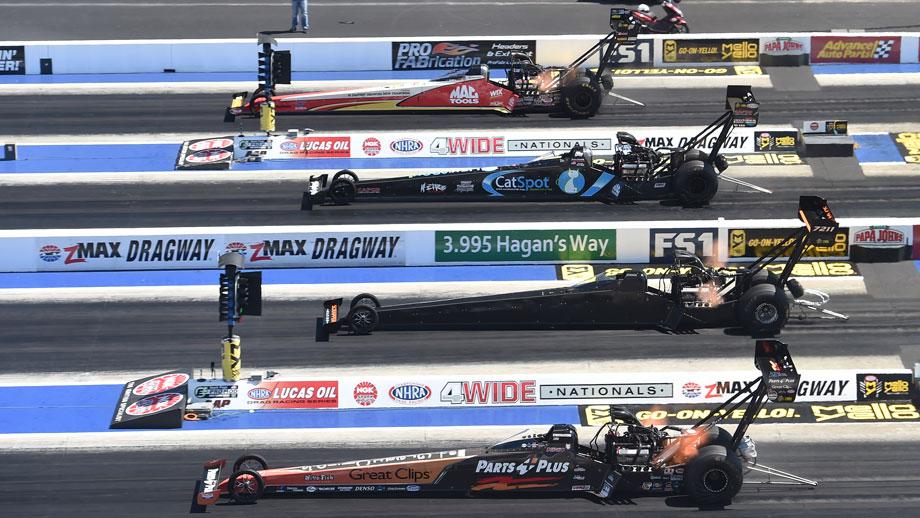 NASCAR: Hendrick Motorsports drivers finished in the first four positions Sunday, led by Alex Bowman, who won the NASCAR Cup race at Dover Del. Penske driver Joey Logano was fifth behind Bowman, Kyle Larson, Chase Elliott and William Byron. Flames were evident at least twice during the race. Aric Almirola crashed and while he crawled out through the netting covering his window on the driver’s side, fire broke out on the other side of the car that was against the wall. And then, while Bowman was being interviewed in Victory Lane, a fire smouldered underneath the rear of his car. For details, please click here

Austin Cindric put the hammer down in the Xfinity Series race at Dover, winning his third race of the season, while Quebec driver Alex Labbe started 18th and finished 19th. For details, please click here

IMSA: Ricky Taylor, driving for his father Wayne Taylor’s team, was close to running out of fuel as the Acura Sports Car Challenge presented by the TLX Type S wound down at the Mid-Ohio Sports Car Course on Sunday. He had to go slow enough to save fuel but fast enough to stay ahead of his nearest challenger, Felipe Nasr. He did, co-driving the No. 10 Konica Minolta Acura ARX-05 DPi with Filipe Albuquerque to a 0.368-second victory over Nasr’s No. 31 Whelan Engineering Racing Cadillac DPi V.R. that he co-drove with Pipo Derani. For details, please click here

John Force – and, face it friends, if he’s not around there simply isn’t an NHRA – won the 152nd Funny Car victory of his career Sunday at the Four-Wide Nationals in North Carolina and promptly dedicated the win to Bruton Smith, the Speedway Motorsports founder who built the zMAX Dragway at Concord, where the Nationals were held. For details of the meet, please click here