When I review a car, I often look at its sales to get a sense of where it ranks both within its own manufacturer lineup and the market segment in which it competes.

While sales are obviously an important metric and are helpful for contextualizing a vehicle’s relative market significance, they’re also a bit like TV ratings: most popular doesn’t always equal best.

That thought was in my mind as I sat down to write about the Telluride, the three-row, seven- or eight-passenger SUV from Kia that’s been in the Korean automaker’s lineup for almost three years. Finding its 2021 sales figure took a fair bit of scrolling, but what’s more interesting to me than the number (4,270) is year over year performance (+49.67 per cent). 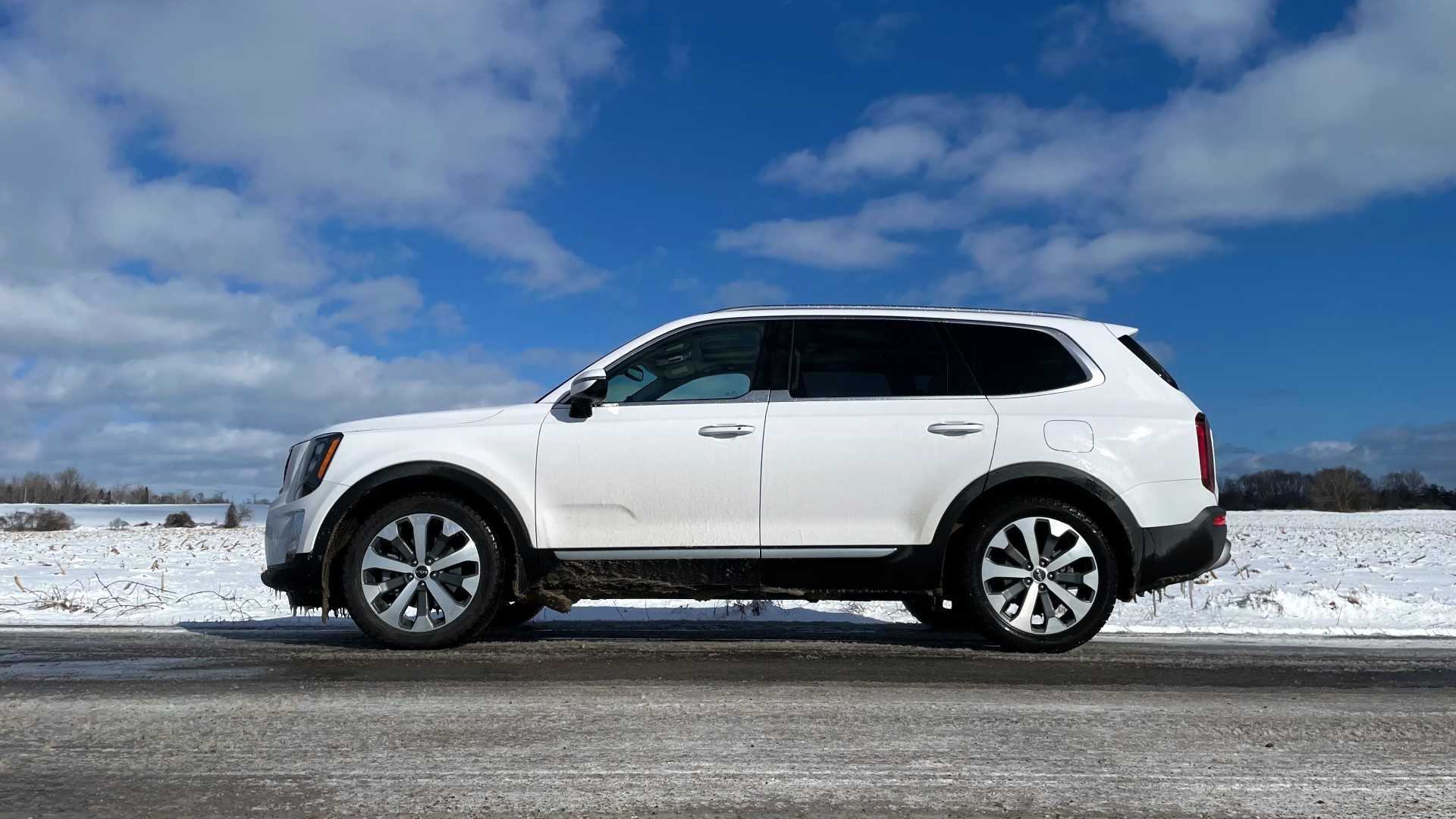 Yes, the Telluride’s sales volume within Canada remains small, but a near 50 per cent yearly increase during a global pandemic and semiconductor shortage is quite a feat. Clearly, interest in the Telluride is growing, and while it will likely never be Kia’s bestseller here, it has intriguing potential. To carry my TV analogy a bit further, the Telluride is like a critically acclaimed show that is growing in popularity but hasn’t yet found a mass audience.

At any rate, the Telluride is based on a Hyundai Motor Group platform shared with its corporate cousin, the Hyundai Palisade. As is the case with the Palisade, one powertrain is offered across all Telluride grades: a 3.8-litre V6 (291 hp / 262 lb-ft) paired with an eight-speed automatic transmission and standard all-wheel drive.

For this review, Kia Canada set me up with a mid-grade SX finished in Glacial White Pearl with a black leather interior. Notable content adds for the SX over the base EX include leather seating, dual sunroof, 360-degree camera monitoring system, Harman Kardon premium audio system and Blind View Monitor. The only option my tester carries is a $250 paint charge. 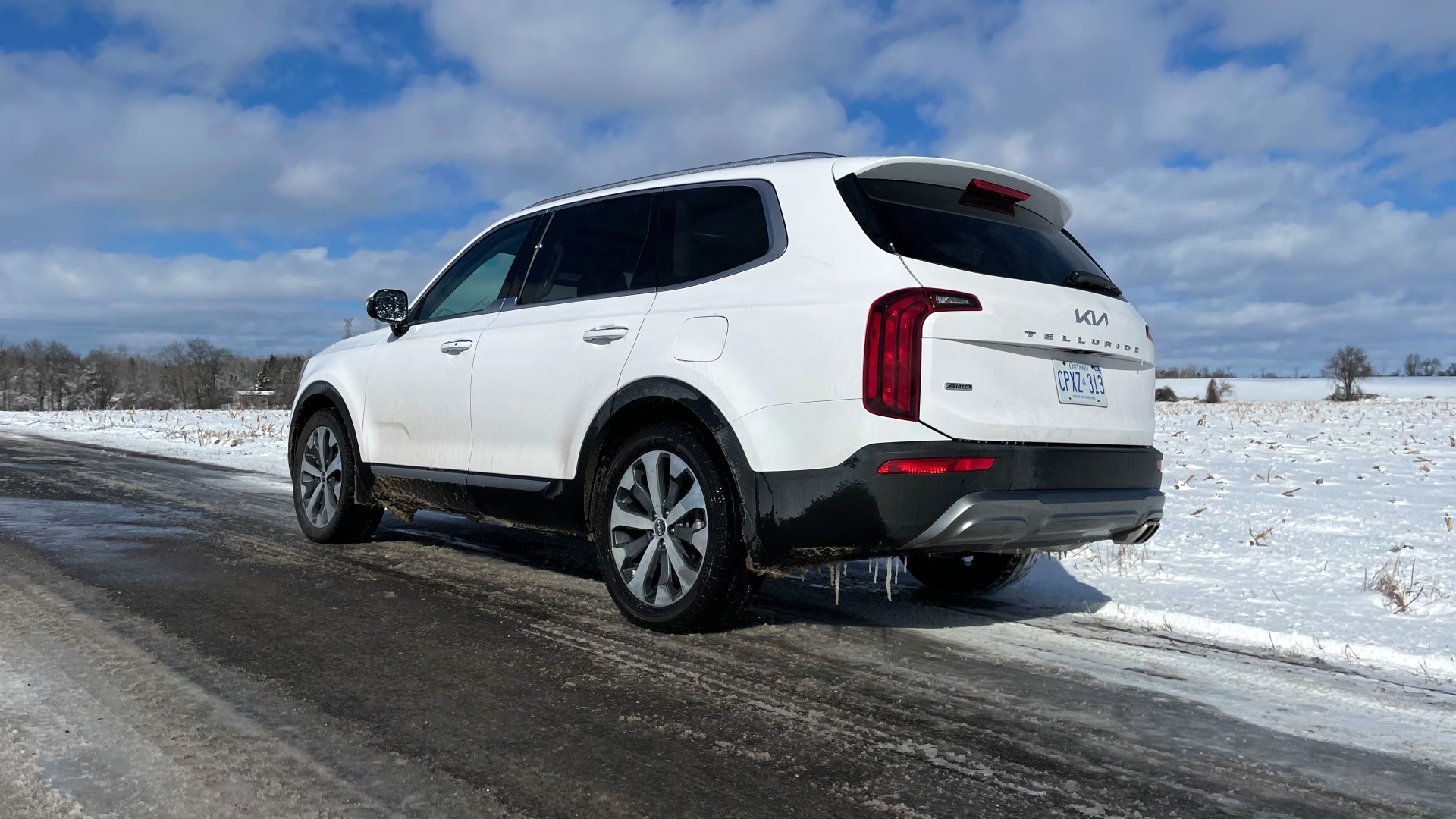 Kia has positioned the Telluride, which gets its name from a ski resort town in Colorado, as a ruggedly capable SUV with the looks to match the adventurous spirit of its namesake. I’ve long been impressed by Kia design, especially in the past half-decade or so, as it pushes the boundaries of automotive styling further into new territory.

And while it’s true the Telluride does generally look much like other mid-size SUVs Kia designers have done well to give it a presence some of its competitors lack.

For me, the standout aspects of the Telluride’s appearance are its broad Tiger Nose grille, square LED headlights with amber daytime runners, and its bracket-style taillights and standard 20-inch alloy wheels. These elements fit seamlessly with the car’s boxy and upright stance to give it a commanding presence. While the Palisade is about elegance, the Telluride exudes ‘can do’ optimism. 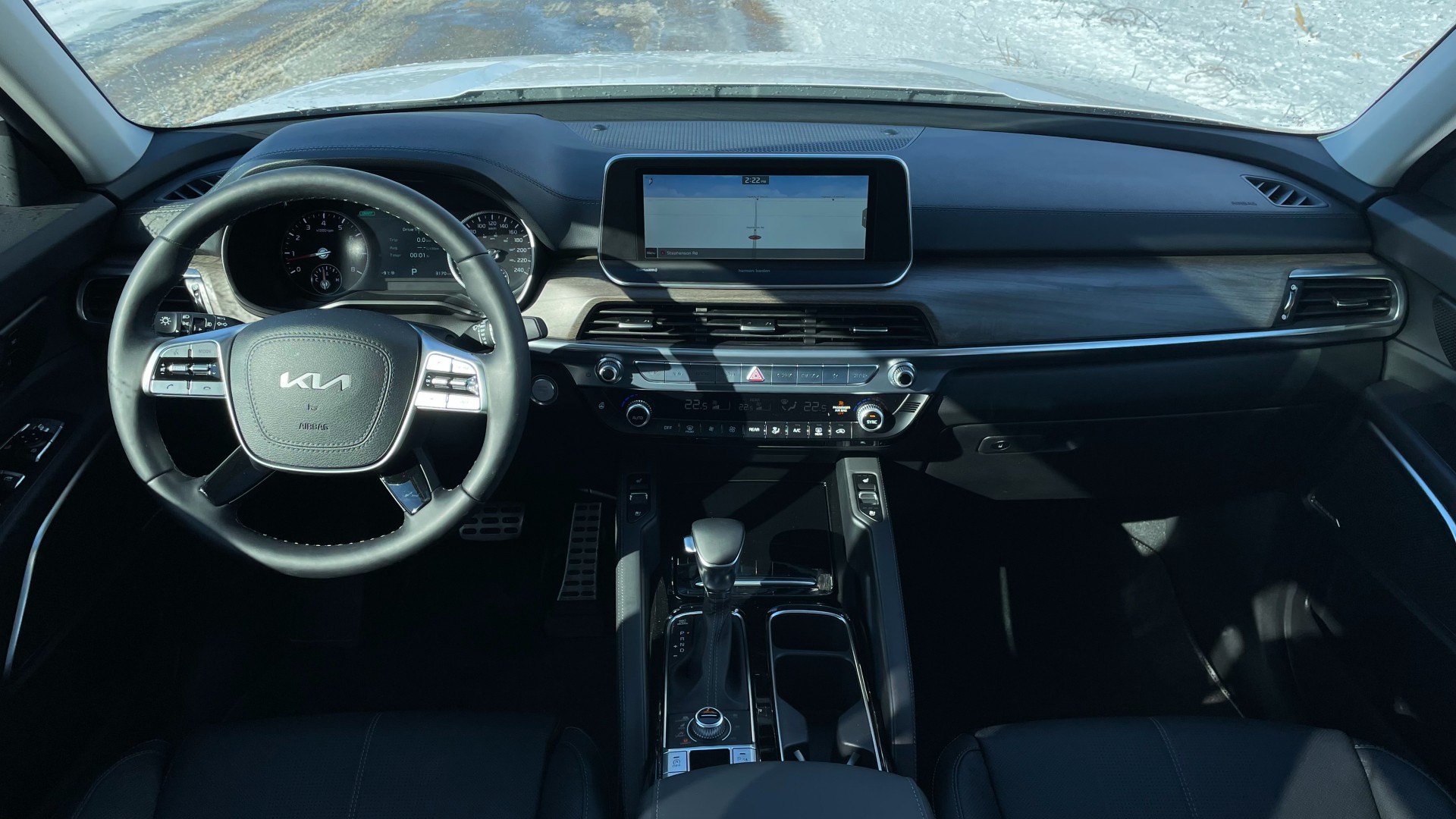 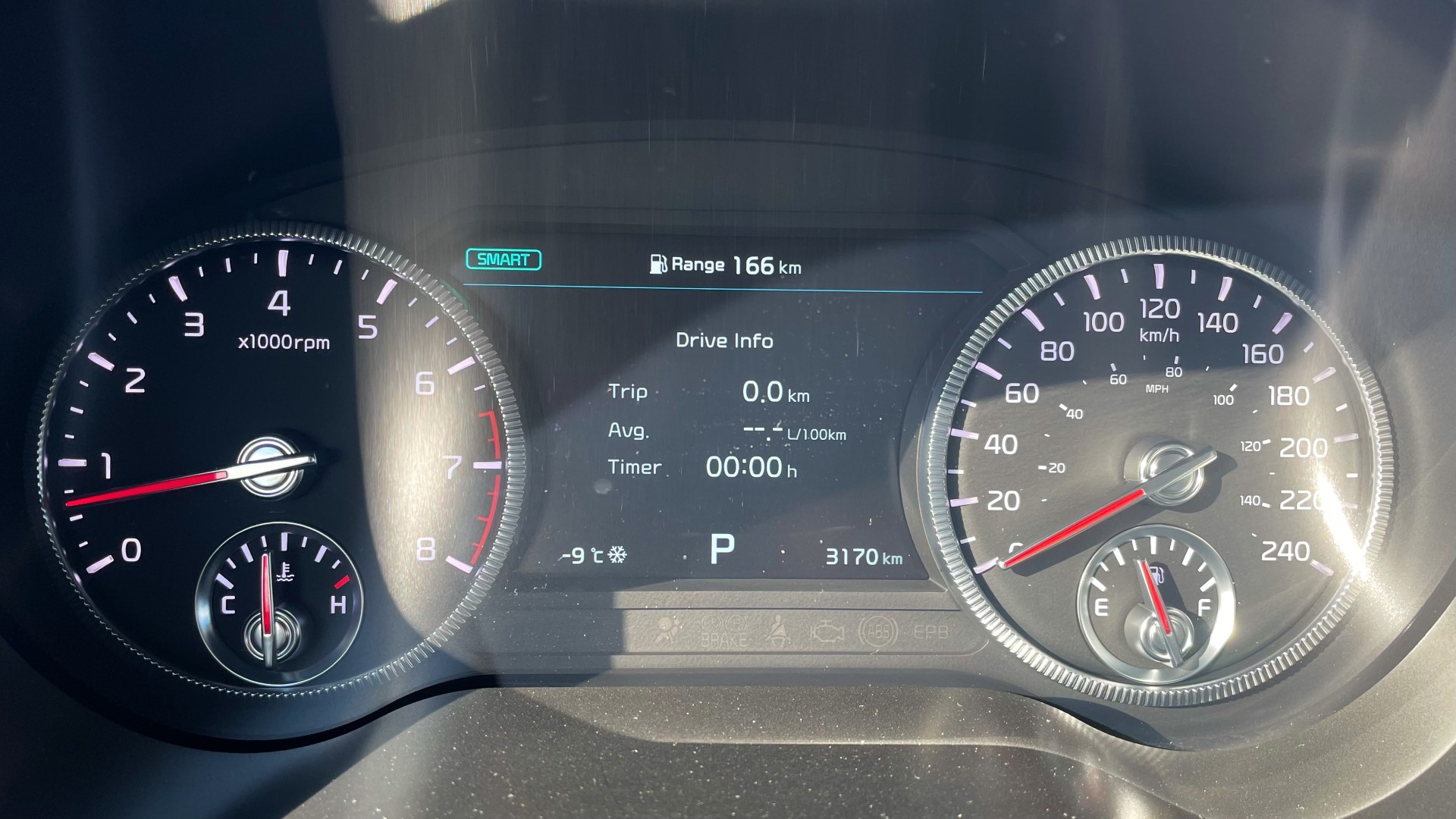 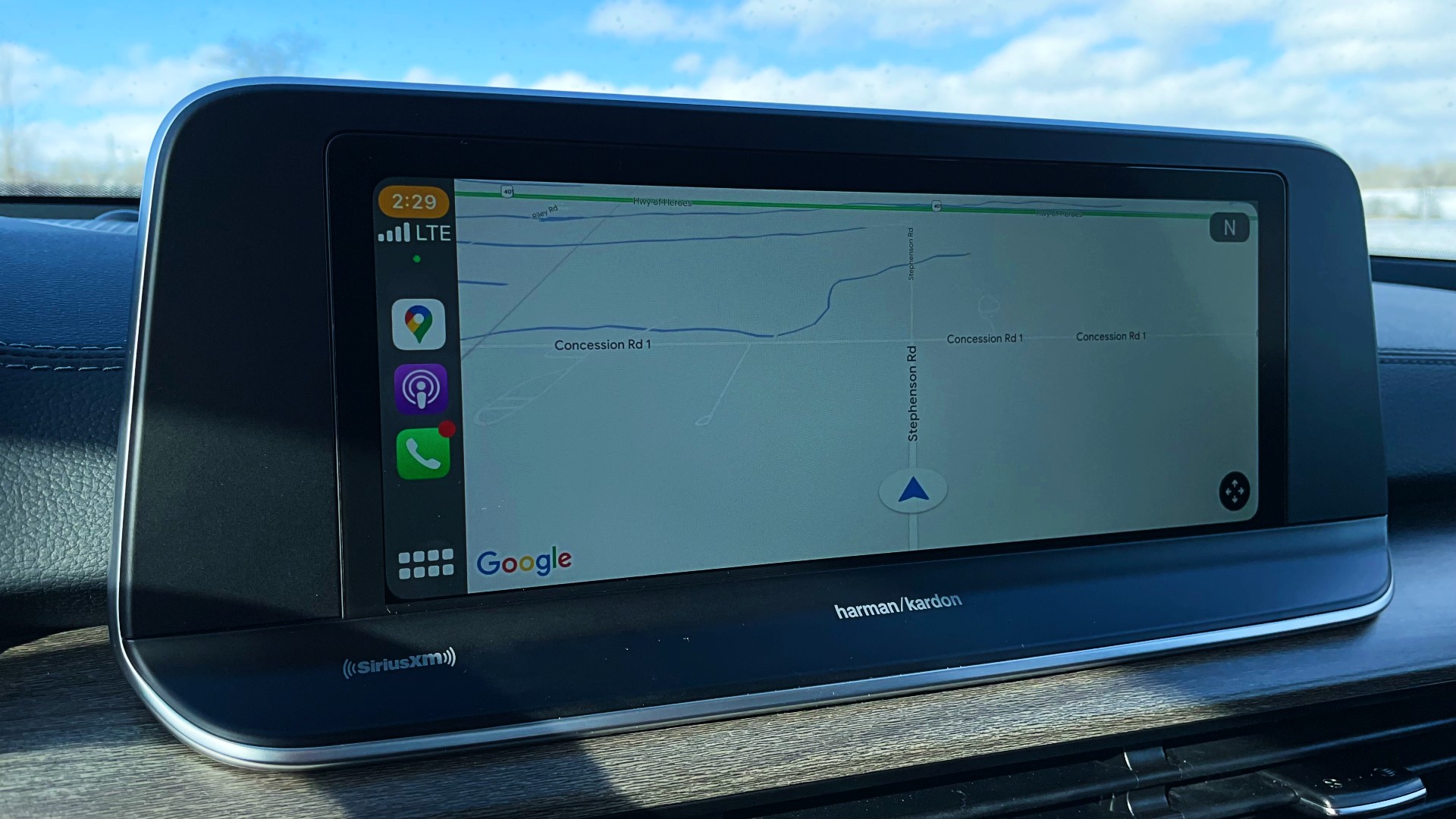 On the inside, the Telluride is comfortable, roomy and well-appointed, but I wouldn’t say that it really wows in any respect. While handsomely finished, the appeal here is not in the size of its multimedia screen (10.25-inch, in this instance) or the shape of its dashboard, but rather about how everything works together.

I mean this in the best way, but the Telluride’s cabin has a no-frills aesthetic even though it comes with plenty of stuff. Kia’s designers have literally checked all my preferred boxes when it comes to dashboard-centre console design: climate controls on hard keys, volume and tune knobs for the stereo, console-mounted gear shifter, seat heaters and heated steering wheel functions on hard switches and even twin analogue gauges in the instrument cluster. It’s as if they were reading my mind! And it all works beautifully. The materials aren’t the fanciest or most expensive, but they look good and touch points are pleasing to interact with.

On the road, the Telluride’s 3.8-litre V6 offers good acceleration, both from rest and in traffic, with smooth, linear power delivery. Its 291-horsepower peak is high in the rev range (6,000 r.p.m.), as is torque (5,200 r.p.m.), but one needn’t bury the needle to get this thing moving. While more low-end torque would be appreciated, I didn’t find the Telluride’s performance be lacking during my week of driving. 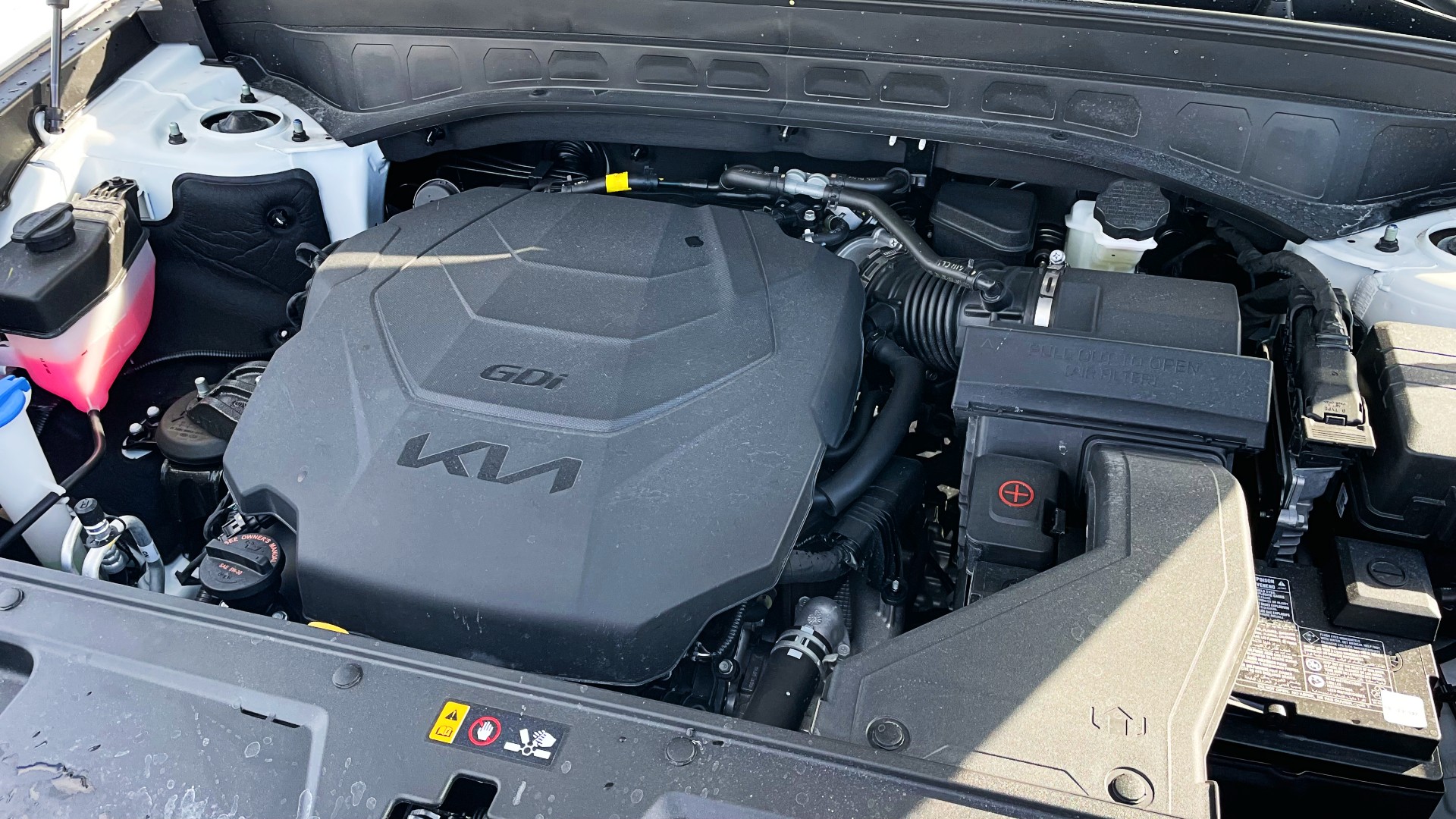 A drive mode selector that includes eco, smart and sport, in addition to comfort, can tailor engine and transmission responsiveness as one desires, but it doesn’t alter the Telluride’s character much. Sure, sport will bump up engine revs and sharpen throttle response, while eco will do the opposite, but this is an SUV we’re talking about, a vehicle that is neither built for performance or efficiency.

As with most SUV’s, the Telluride’s sweet spot is either in comfort or smart, which not only relaxes the transmission, but also produces an acceptable compromise between performance and efficiency for most everyday driving situations. The Telluride also comes with a terrain mode selector with three settings (snow, mud and sand) for off-pavement driving. I made use of the snow setting during my test and found it to be useful for maintaining grip on snow-covered roads.

In terms of ride comfort and general handling, the Telluride felt neither too firm nor too soft, but softer winter tires are a factor in that regard. General handling with respect to steering feedback and body lean felt reasonably responsive for a vehicle of this type in normal driving conditions, although I didn’t run it through any emergency exercises on a closed course. It’s worth mentioning, however, that most shoppers in this segment aren’t too concerned about autocross prowess. 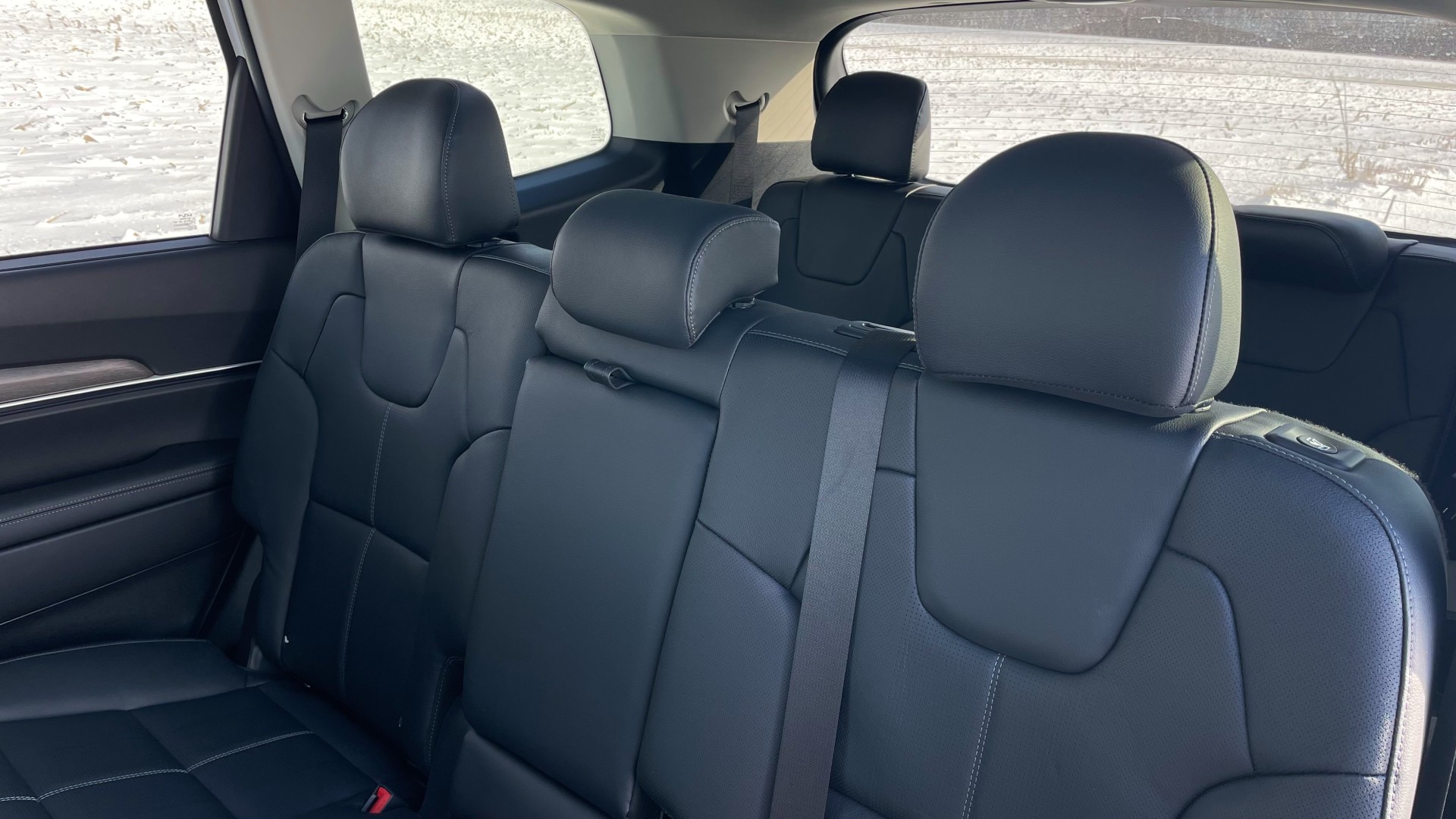 On the other hand, intenders in this segment do care about practicality and utility, and on that score the Telluride delivers. With seating for up to eight, 2,455 litres of maximum cargo space and a 5,000-pound tow rating, this SUV hits the notes that matter for families.

On the downside, the Telluride’s starting MSRP is higher than that of some of its competitors, such as the Nissan Pathfinder, Toyota Highlander, and the Palisade, but the difference fades when comparing upper-level trims. There are currently no electrified Telluride models available either, which could impact purchase considerations, although to be fair, many SUVs of this type aren’t available as hybrids either, including the Palisade and Pathfinder. 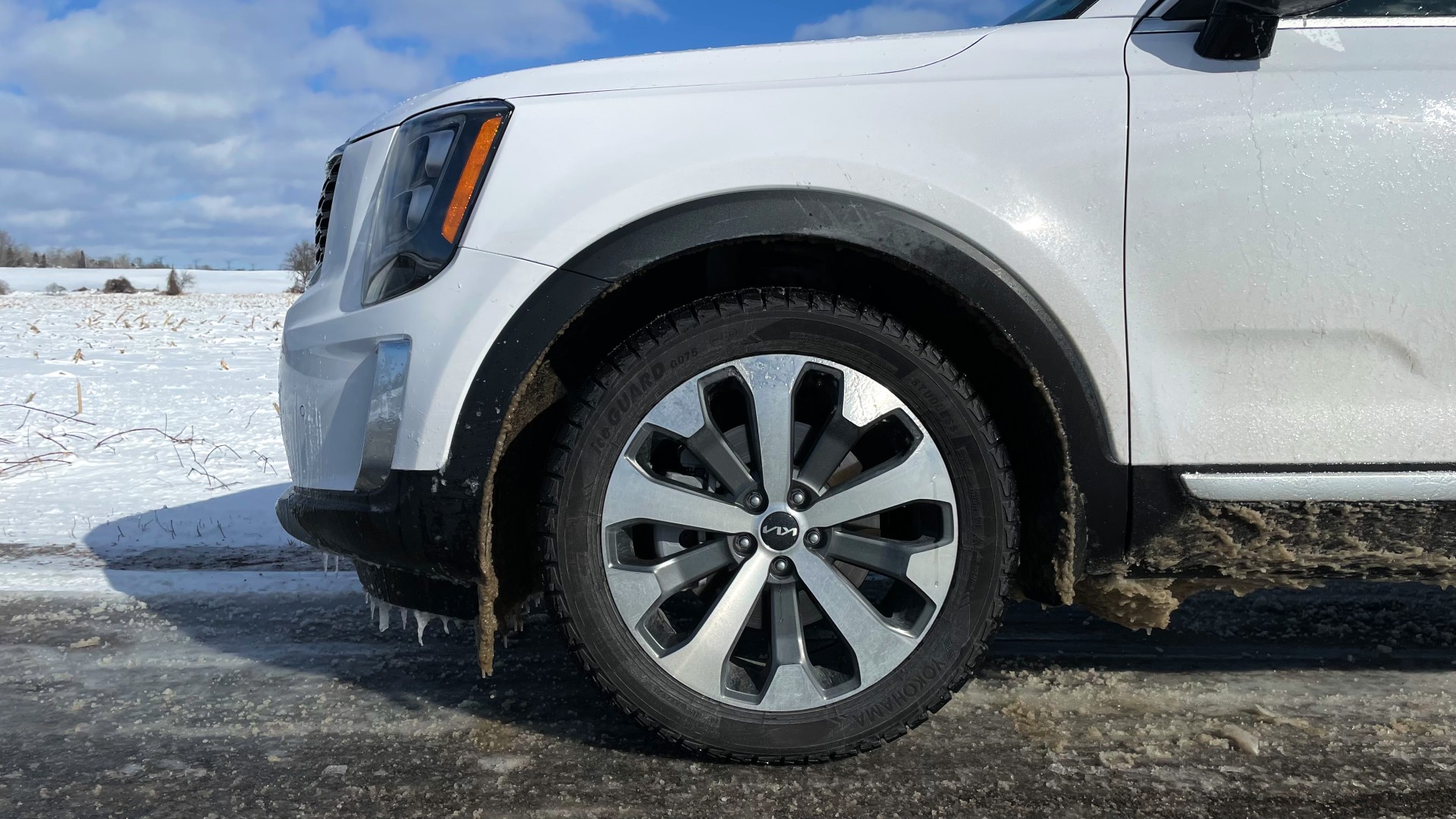 Bottom line, the Telluride impresses. From its ruggedly, handsome design, to its accessible and straightforward cabin layout and high utility factor, this Kia ticks the boxes that matter to consumers. And based on how well it performed in 2021, it appears ready for prime time.