The Toyota GR Supra 2.0 is supposed to be the “lesser”. Less powerful. Less noisy. Less glamourous and with less features, and yes, less expensive, as well.

This is the Toyota GR (for “Gazoo Racing”, the name of Toyota’s racing arm) Supra, a car that’s had a gestation longer than Gaudi’s La Sagrada Familia monument in Barcelona and one that has the honour – or, as some would say, the curse – of having a cult following like few other cars in recent history

Gran Turismo players think of the Supra and see a fourth-gen model with the red, white, and green colours of Castrol Tom’s racing. Movie buffs see an orange one being driven by Paul Walker (or a white one driven by his likeness, depending on how far your “buff-dom” goes) in various parts of The Fast and Furious movie franchise. Still others see it as a bit of a curiosity, a rear-wheel-driven, long-hooded car from the faraway Land of The Rising Sun that somehow, some way was able to do battle – really do battle – with the Mustangs, Camaros, and even Corvettes that they’d known, loved, and driven for decades. 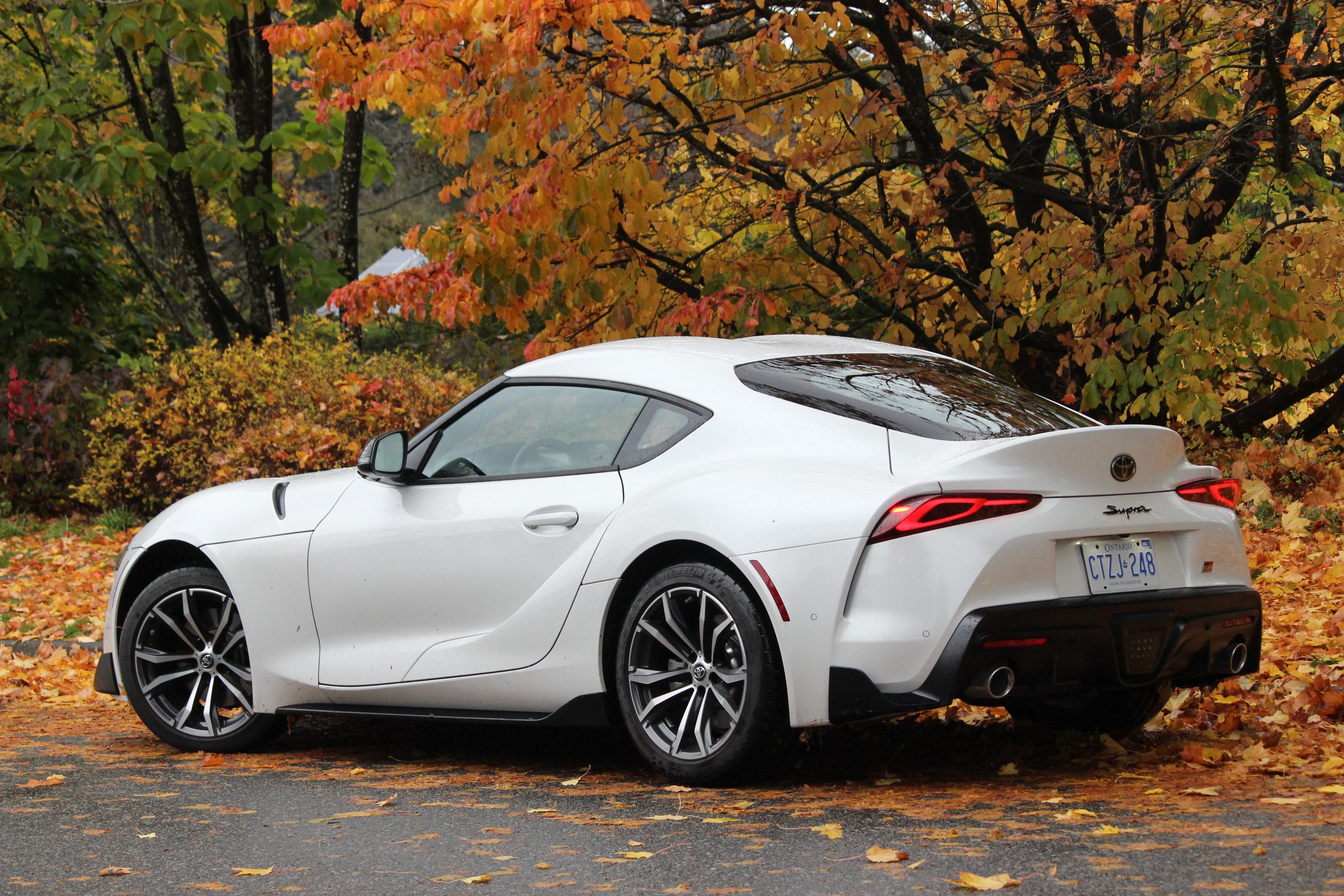 That’s quite the following and that’s nice – until it isn’t. The length of this latest Supra’s development process was already raising eyebrows and when they finally released a production model that shared much of its engineering with the BMW Z4…well, the handwringing has been well-documented, so we won’t get into that here. Not to mention that all of that stuff means nothing when it comes to the actual performance of this car. It might speak to its lore, but while a car’s story is always important – especially at the performance level – its performance is what needs to walk that walk.

Power from this 2.0-litre four-cylinder turbo Supra is rated at 255 horsepower and 295 lb-ft of torque, down 80 hp and 70 lb-ft on the turbo-six 3.0 model. It gets that car’s same eight-speed ZF automatic gearbox, though, and while the zero-100 km/h time jumps from 3.5-seconds to five flat, the 2.0 is still Toyota’s second-fastest offering, slotting between the 3.0 and the RAV 4 Prime. 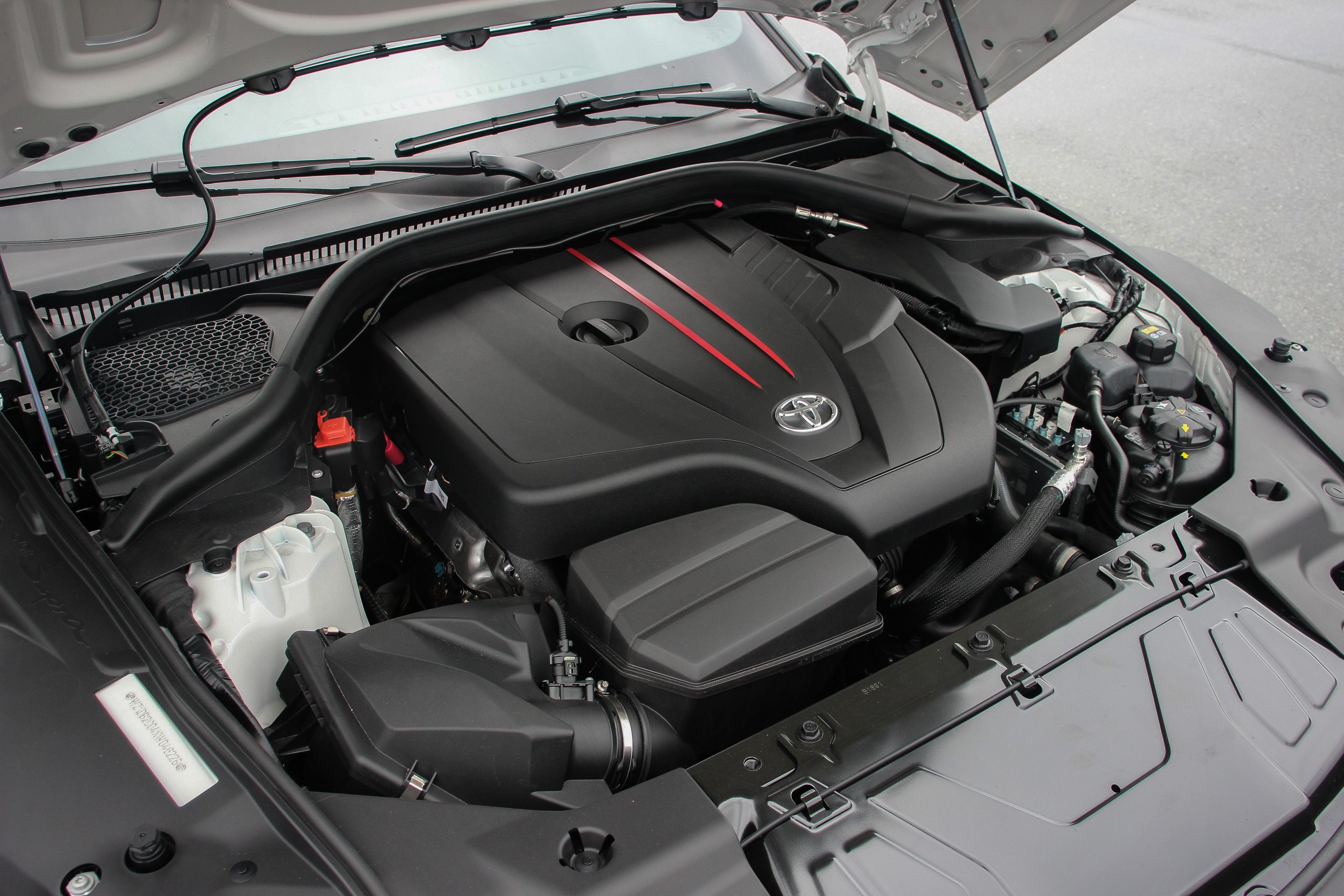 Looks-wise, the only real difference between the 2.0 and 3.0 is the wheel size, which drops from 19-inches on the 3.0 to 18-inches here, and while that does mean a little more rubber between wheel and fender, the Y-spoke design looks great and fits well with the surroundings.

Surroundings that, it should be said, are made up of some of the most distinctive styling cues you can find on the market today. From the pontoon-style nose, to the short and swooping rear deck with spoiler and crazy taper to the side windows, this is an eye-catching and unique design.

Which, it should be noted, is in stark contrast to the interior environs. This is where you can literally see the BMW influence; the steering wheel and attached shift paddles, the electronic shift lever, iDrive infotainment controller and menus, the tough-to-decipher headlight buttons, the centre stack – all direct lifts from the BMW parts bin. The partially digitized gauge cluster is a Toyota original, though, which is nice.

That BMW-ness doesn’t bother me, but the lack of Apple CarPlay and Android Auto does, and it means that since there’s no baked-in navi, you are kind of out of luck in that department. There is also four speakers instead of 12 like you’d get in the 3.0 car but since the interior is a pretty “intimate” place, I don’t miss those speakers all that much. 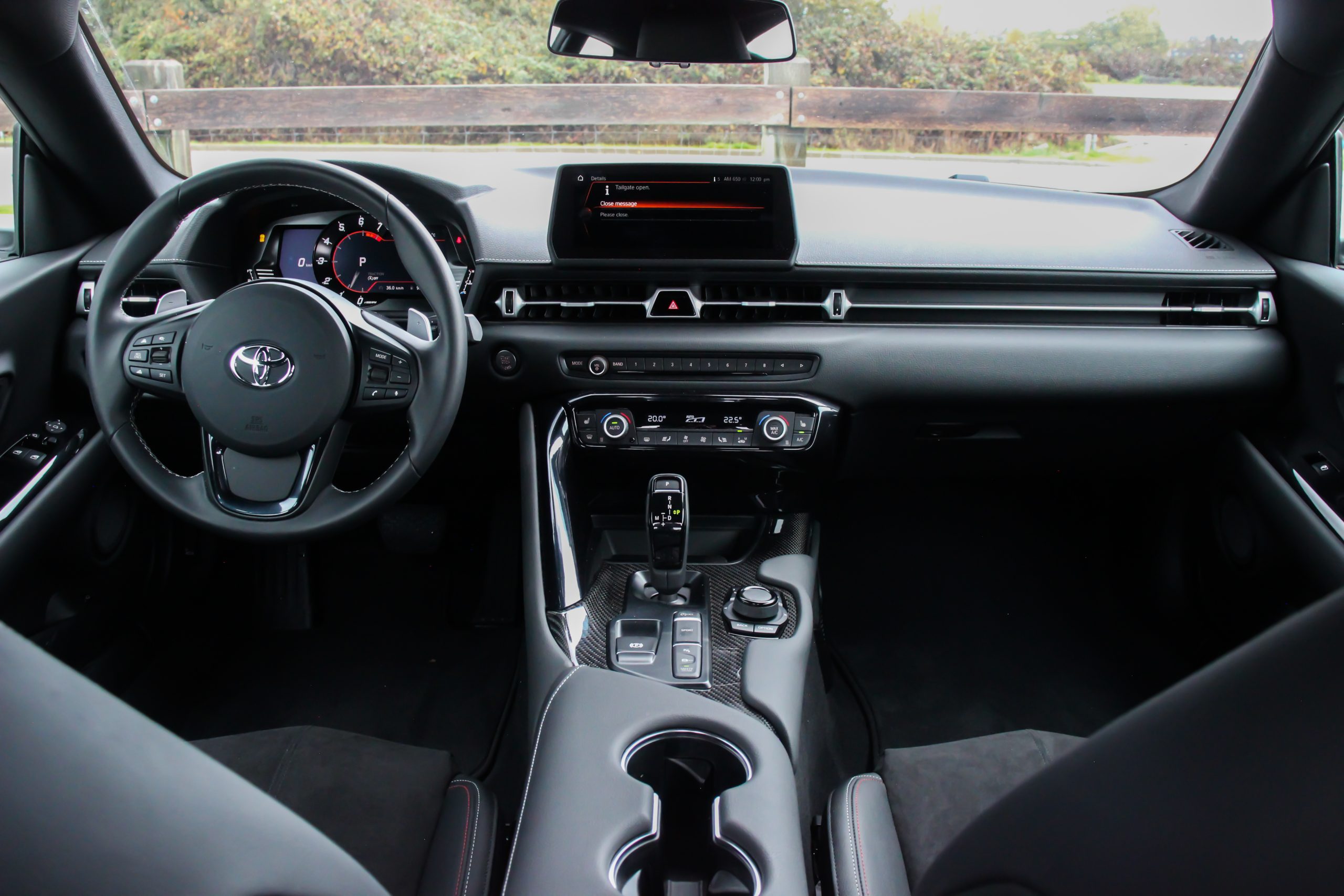 Climbing in takes a little bit of work, especially if you’re of taller ilk – and by “taller”, I mean anyone over five-foot, five-inches. The roof swoops low and coupled with the high bolsters on the seats, you do have to duck lest you smack your head and give yourself whiplash. Once inside, the relationship between driver and wheel is right on but side- and rear visibility is almost criminally low; the double-bubble roof makes for surprisingly generous headroom, but the way it kind of clamshells down towards the side windows means I almost – almost – had to duck to see out the side windows. Best make extra sure you get those wing mirrors adjusted and mind your shoulder checking when entering the freeway, too.

The view out over that long hood is just fine, though – not as pillbox-like as you might think – so you’ll see all that scenery rushing toward you in a nice, widescreen kind of way. And it will be rushing because power deficit or no, the 2.0 is lighter than the 3.0 and man-oh-man, you can feel it. 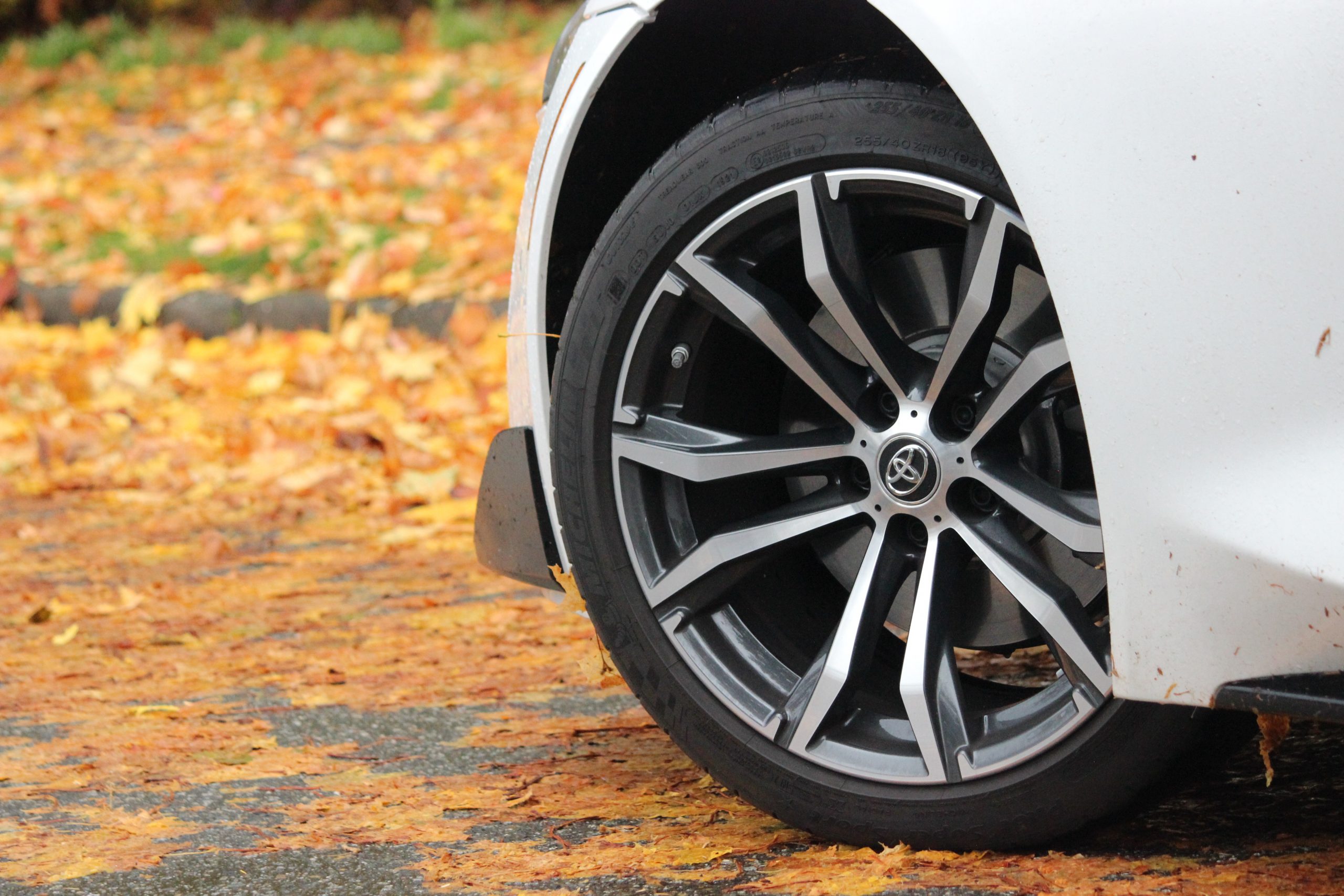 You can feel it in the way it sets off from rest, from the way it performs mid-gear acceleration, and especially from the way it changes direction. It doesn’t sound the same – there’s no sport exhaust like the 3.0 has – but it sounds a healthy few decibels above muted and suits the proceedings just fine.

The handling, meanwhile, is more than fine. With less weight over the front axle, turn-in is immediate and actually has better feel than many of the performance BMWs I’ve recently tested. You lose the strut tower brace and the adaptive suspension from the 3.0, but again, with less weight to deal with, you don’t have as much need for stuff like a strut tower brace. As a result, the 2.0 feels incredibly light on its feet, even more so than the 3.0 which, if I’m honest, feels a little more Ford Mustang to the 2.0’s Porsche Cayman. That’s not a bad trade and with the smaller wheels, you also get a softer ride in-town and so your ability to zip in and out of rush hour traffic is matched with a ride that’s much easier on the back.

The 2.0 is actually a little easier to live with than the 3.0. You still have to deal with that ludicrous outward visibility, but you don’t emerge from drives with a sore back or numb thighs. This is the better all-round car and since it starts at less than 60 grand – $56,510 – and is easier on fuel, it’s more accessible to more people. If you want something a bit more hardcore, Toyota has an answer with the 3.0. But if you want a sports car that you could daily just that much more, then this 2.0 deserves a long, hard look because in the end, it’s not really “lesser”, at all.

The vehicle was provided to the writer by the automaker. Content and vehicle evaluations were not subject to approval