Volvo doesn’t want to be confused for anything other than a Volvo. That’s why it goes through great lengths to make its product look, feel, and drive differently than anything else in the premium space. And while it’s true that the company’s roots are now more Chinese than ever, its products have never felt so Swedish.

The 2022 XC60 is a case in point. While it sits in a segment where pretty much everyone does things in a similar fashion, Volvo arrives with a slick Scandinavian design and a unique drivetrain. The XC60 B6 is the kind of weird and quirky we expect from this brand.

Complicated? Very much so

I’m going to try to explain what the highly complex B6 drivetrain is without losing your interest. It’s a direct evolution of the old T6 architecture. No, not the old turbocharged six-cylinder, but rather Volvo’s more recent setup that it’s been putting in all its vehicles since 2015.

At the core of it all is a turbocharged 2.0-litre four-cylinder. Volvo then adds a supercharger on top of that. Because, why not? The B6 is essentially that drivetrain, but with a 48-volt mild hybrid system grafted onto it. How’s that for mechanical complexity? 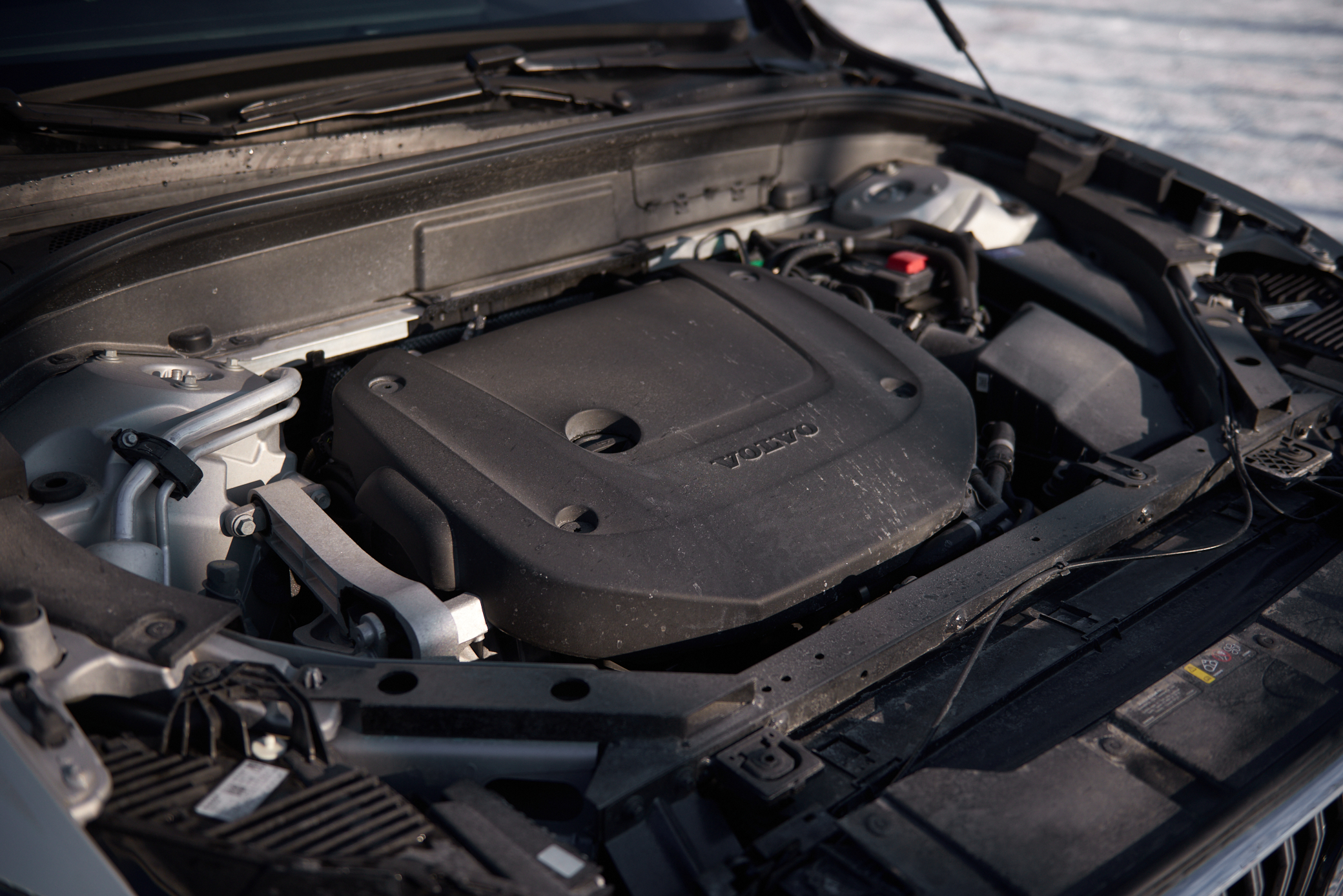 The result is a drivetrain that’s supposed to be cleaner and more efficient. The tiny electric motor acts a generator to run the accessories, but also doubles down as a large start stop system when you come to a halt.

The B6 engine comes as part of a light refresh for the XC60 for the 2022 model year, which also includes a slightly massaged front fascia. Volvo says it has improved the XC60’s radar, cameras, and sensors for improved driving aid performance. The infotainment system was also overhauled. It’s now entirely Google-powered like in the XC40 Recharge and Polestar 2.

How does that fancy drivetrain fair out in the open world? It’s quick, that’s for sure, but you’ll never notice it from how smooth everything operates. That’s where the XC60 B6 differentiates itself from its German opposition. While the segment is generally obsessed with dynamic qualities like zero-100 km/h sprints or driver-focused handling, the XC60 hands you its performance on a quilted pillow, suggesting its driver lay back and relax instead.

The addition of a tiny electric motor not only improves low end torque, but it also helps smoothen out what was once a jagged drivetrain. The old T6 had a lot of lag when stomping on the throttle, mostly due to so much going on underneath the hood. There were also awkward peaks of power when the turbocharger and the supercharger would kick in. Everything appears to have been evened out thanks to the hybrid setup, giving way to power delivery that’s so smooth and linear, one could think this is a V6 engine. 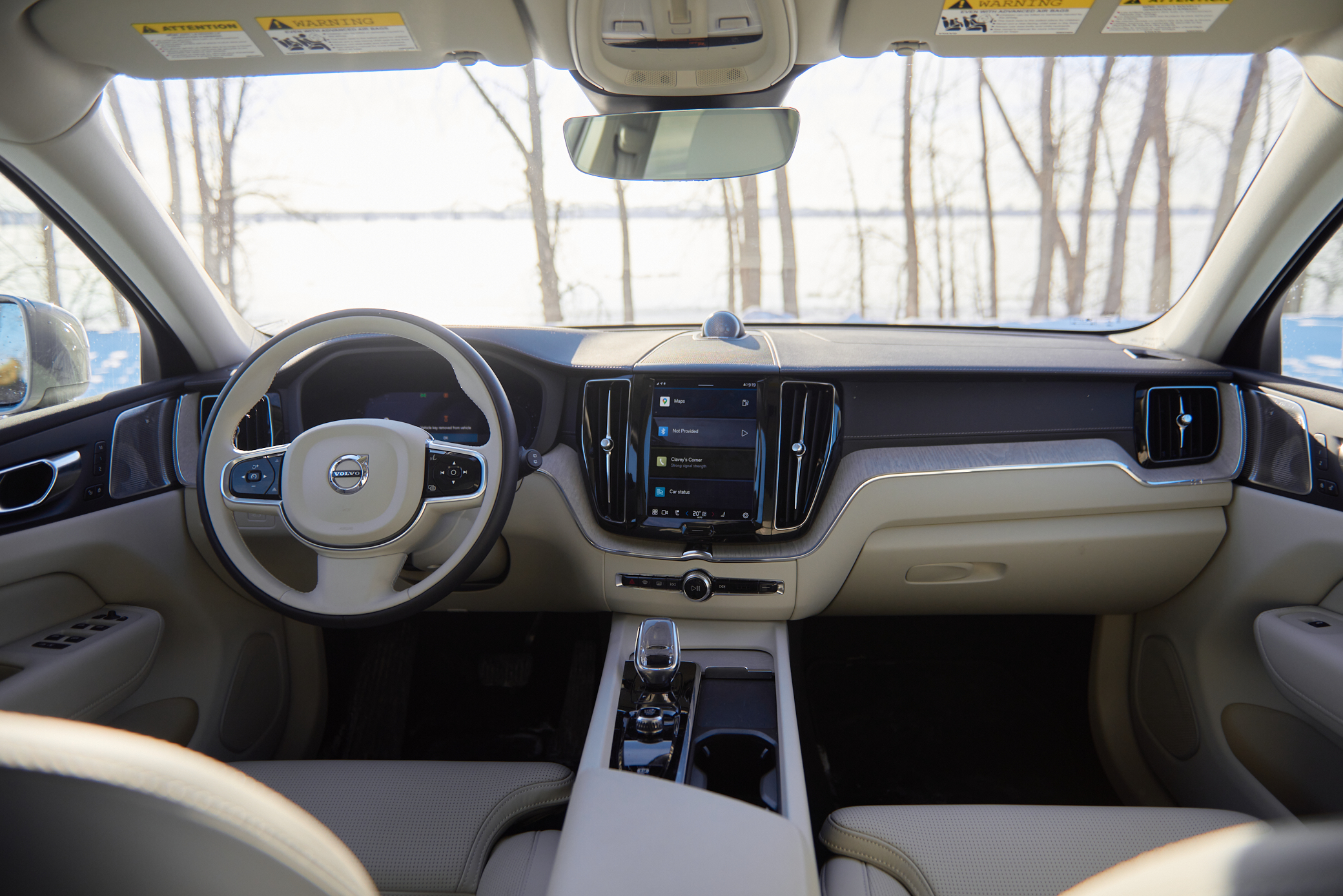 Our tester was the Inscription trim, the second of three available versions. It came with a beautiful cream interior and wood trim, giving it a truly upscale look and feel. Massaging seats, with impeccable lumbar, lateral and neck support, only accentuate the stress-free experience, while the exquisite Bowers & Wilkins premium audio system – complete with gorgeous speaker grilles – takes care of flooding your ears with soothing melodies.

The XC60’s cabin is well put together with high quality materials and a simple layout. A fully digital instrument cluster lets you display the Google Maps navigation screen, or nothing at all. It also has some of the most intuitive steering wheel controls we’ve ever sampled.

Ironically, the XC60’s infotainment system isn’t as user friendly as the rest of the car’s controls. We appreciate the simplified layout from the Google-sourced software, but hidden menus and barely explained features did have us scratching our head at times. Volvo also continues to incorporate heated seat and climate control features in the infotainment system itself instead of using hard physical buttons. That’s not exactly handy during a cold winter morning while wearing a pair of gloves. 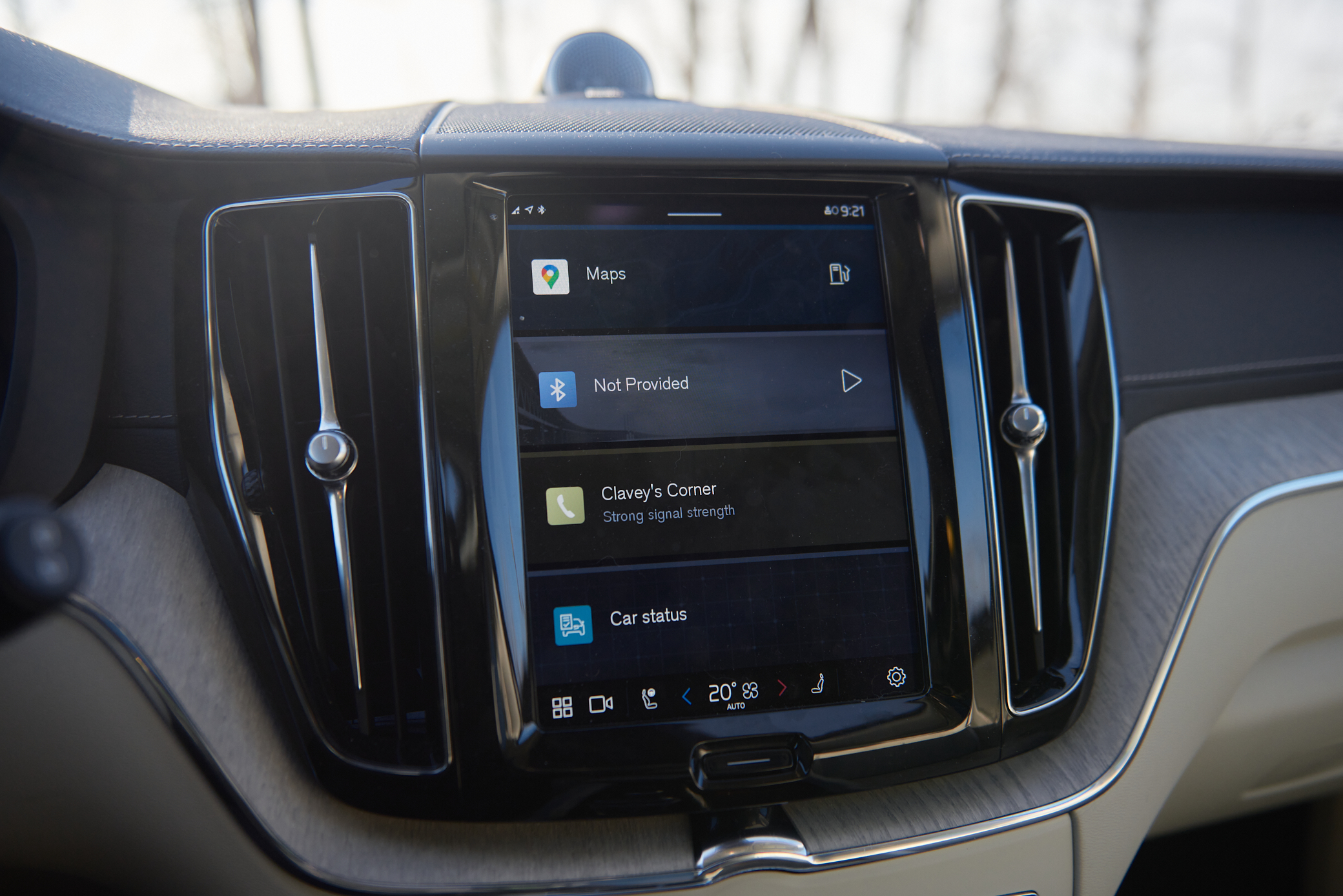 Dimensionally, the XC60 is right there with its main rivals from Audi, BMW, Mercedes-Benz, and Acura. Rear leg and headroom are ample, and maximum cargo space (with both seatbacks folded flat) is rated at 1,783 litres. This allows the XC60 to be more practical than an Audi Q5 (1,503 litres) and a BMW X3 (1,775 litres).

But perhaps the most important question is if the B6 drivetrain delivers from a fuel economy standpoint. Honestly, it’s very difficult to see differences between this and the old T6. That said, we drove the XC60 for over 1,000 kilometers during a Siberian-like week in February. We recorded a 10.6L/100 km average. For an all-wheel drive vehicle of this size and weight, during such conditions, that’s more than decent. 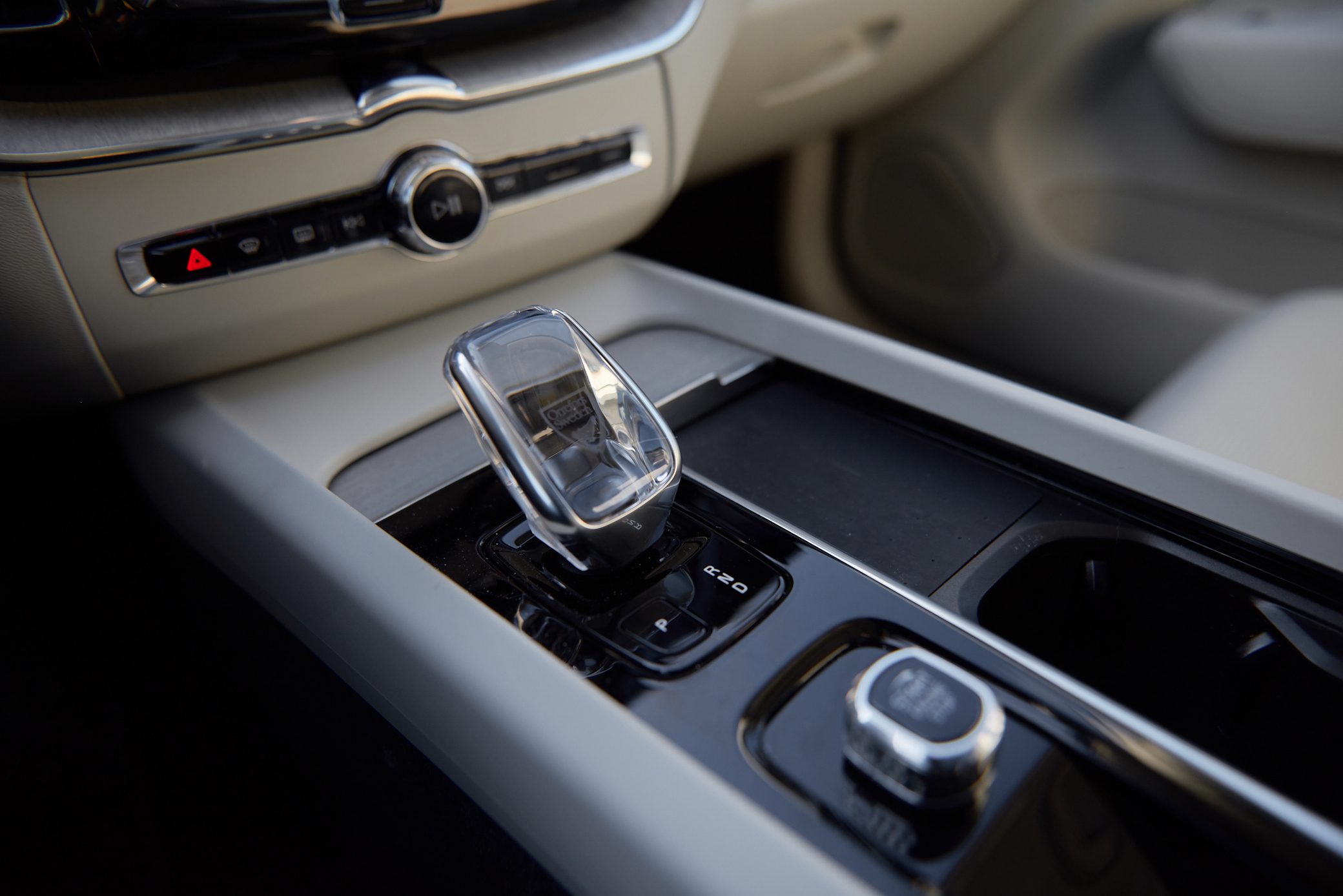 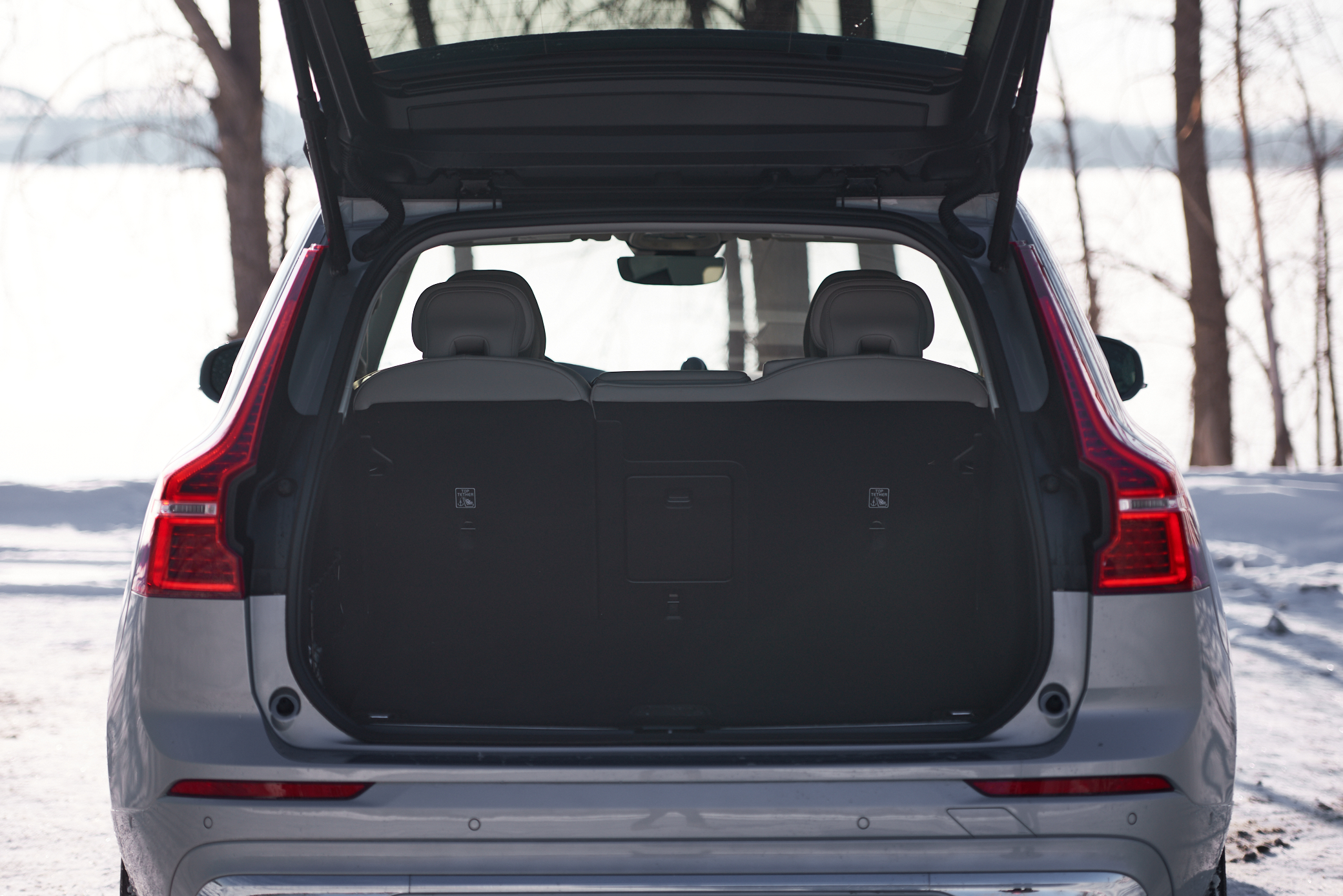 If fuel efficiency isn’t what allows the B6 engine to stand out, it does a bang-up job of quelling most of the XC60’s power deliver issues. This is a fancy and enjoyable vehicle to spend some time in, one that would rather dance to the beat of different drum. But beware, this drivetrain has seen its share of mechanical issues in the past, and Volvo’s aren’t exactly cheap to maintain. There’s a price to pay for being unique.