ASHEVILLE, NC – “The truck’s about two clicks to the west,” said a teammate, after having been handed a set of mystifying coordinates and a handheld GPS system. “I think,” they added. We started walking, keeping an eye on a group of ominous rainclouds that threatened to turn the North Carolina field in which we were standing into a gigantic slip-n-slide.

Why were we here? Well, it should surprise no one that automotive manufacturers tend to train their employees on finer points of product knowledge. After all, informed staff stand a better chance of properly taking care of the customer than one which has simply been thrown into the deep end and told to figure it out. The type of training, however, definitely varies. Some car companies train their staff by asking them to complete online courses. Others have an hour or two of in-person demonstrations in the stark confines of a dealership.

And then there’s Land Rover. 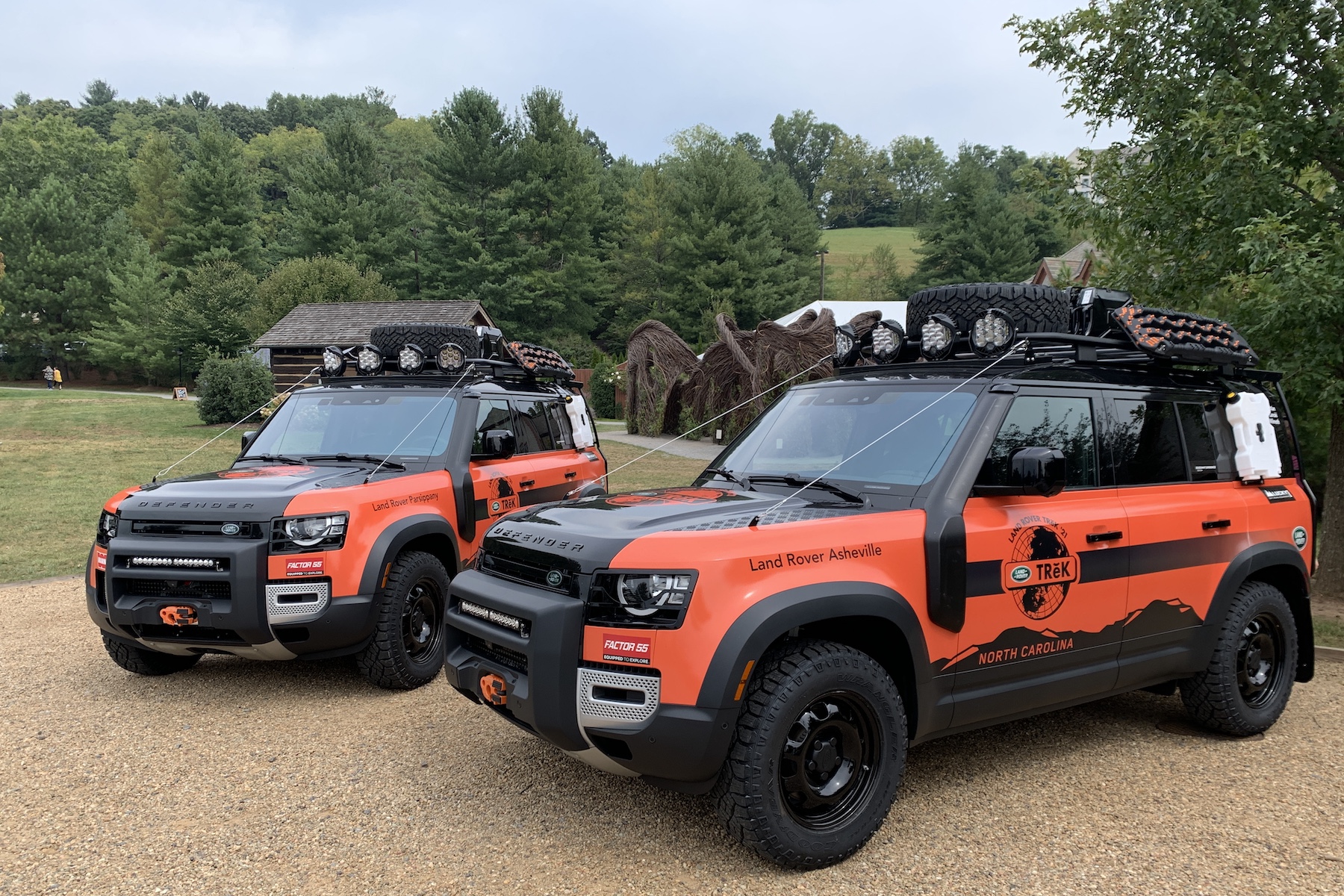 Working together to build a bridge sturdy enough over which a 2.5-ton SUV must be driven? Blindly driving through an unmarked maze while a teammate barks navigation instructions from a map nailed to a damp tree some 500 metres away? Manually winching that same 2.5-ton vehicle backwards and up a hill using nothing but stout chains and muscle power?

As it turns out, the answers are yes, yes, and – exhaustingly – yes.

It’s called Land Rover Trēk, an event designed to push the vehicle knowledge and physical fitness of a three-person team way beyond any training session delivered within the sterilized confines of an urban conference room. Devised back in 1996 as a vehicle-oriented competition in the vein of Camel Trophy (which by that time had been long using Land Rovers as their truck of choice), Trēk pits 70 teams against each other in an accuracy-over-speed battle of driving skill, orienteering, and familiarity with one’s product.

Three-person teams are assembled from a trio comprised of someone from a dealership’s front end (sales or finance), service centre, and parts department. In other words, it’s a rogue’s gallery of talent from people who may not normally work together in day-to-day dealership operation. The winning team from each wave of competition will return to Asheville in October for the Trēk 2021 Finals, where the overall winner of the competition will be crowned.

Media were invited to complete a dry run of the event, timed a day prior to dealership personnel descending on the course located on the lush grounds of the sprawling Biltmore estate in North Carolina. This explains why your author found himself standing in a damp field holding a set of cryptic coordinates suggesting the vague direction in which we would find a built 2021 Land Rover Defender 110 P300 that had a few breakfast burritos slowly cooking on its four-cylinder engine manifold. 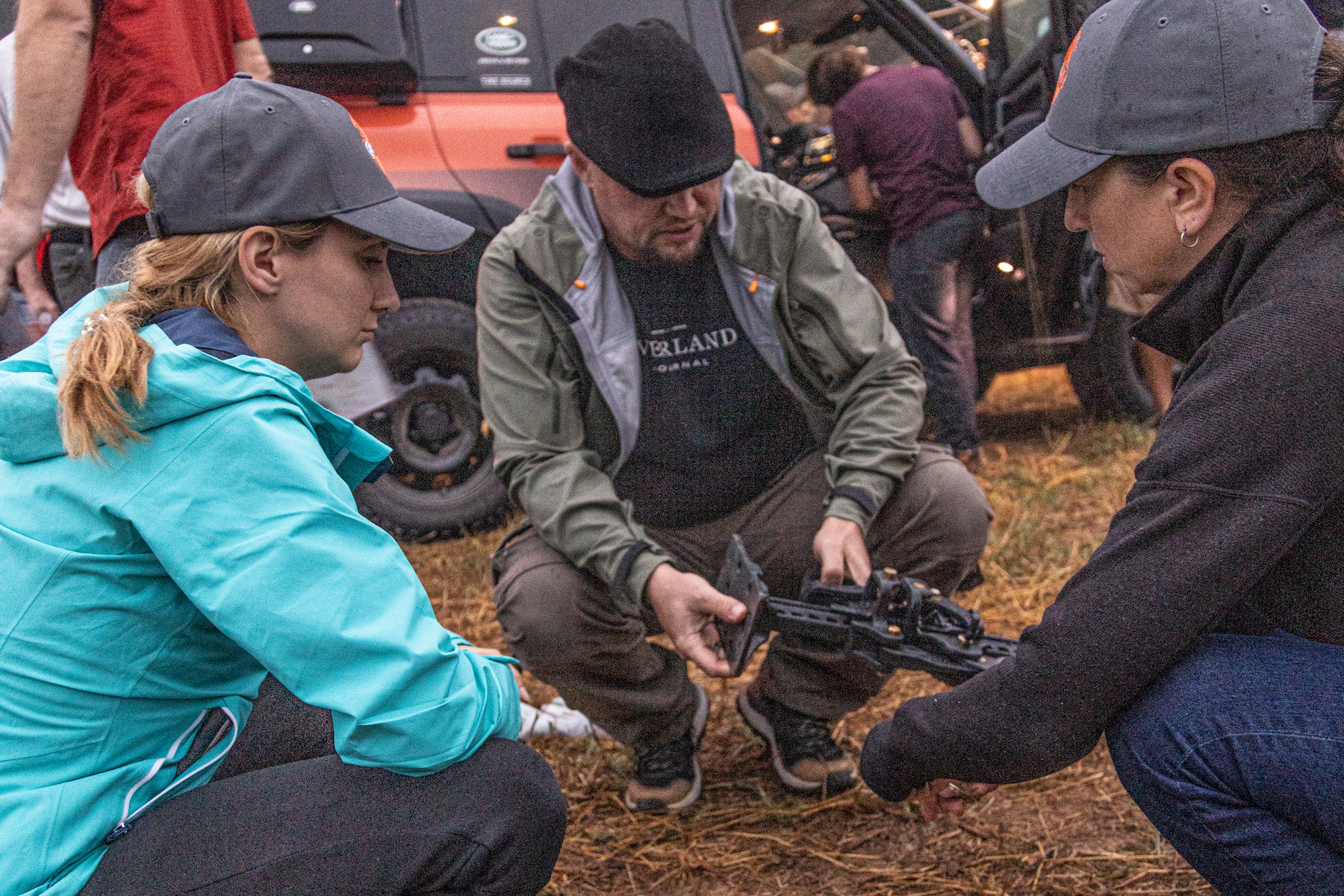 After a two km sojourn through a Biltmore vineyard and the careful navigation of a prickly fence, our team of three were installed behind the wheel and set off into the Carolina countryside in search of adventure. And points.

Because this is, after all, a competition. No fewer than 15 different activities are scattered around the Trēk course, all of which are only accessible through the proper use of a handheld GPS unit and a series of coordinates. The Defender’s on-board navigation system was of no help; so far as it was concerned, we were simply on a vast expanse of private Biltmore property with no public roads. We covered the Defender’s 10-inch touchscreen with our paper map.

Strategy is important in Trēk. The event starts at daybreak and ends at 1:30 p.m., with penalties assessed to teams who miss the checkered flag. Loitering trailside trying to decide to which of the 15 challenges one should next navigate is a sure-fire way to leave points on the table, which is why most teams decide the night prior which obstacles they’ll attempt and in what order. Our first selected task? Build a bridge.

Seriously. It was like something out of an old Survivor episode but without Jeff Probst making faces at the camera. Amongst the building materials were planks stamped with portions of the Land Rover logo, a pictorial puzzle which had to be properly assembled in order to complete the challenge. The clock stopped when the Defender was driven across the completed bridge, materials were disassembled for the next team, and all hands were back aboard the rig. As a point of pride, your author will forever remind anyone who will listen that our team was only 17 seconds slower in this chore than a trio which included Olympic medalist Lindsey Vonn. 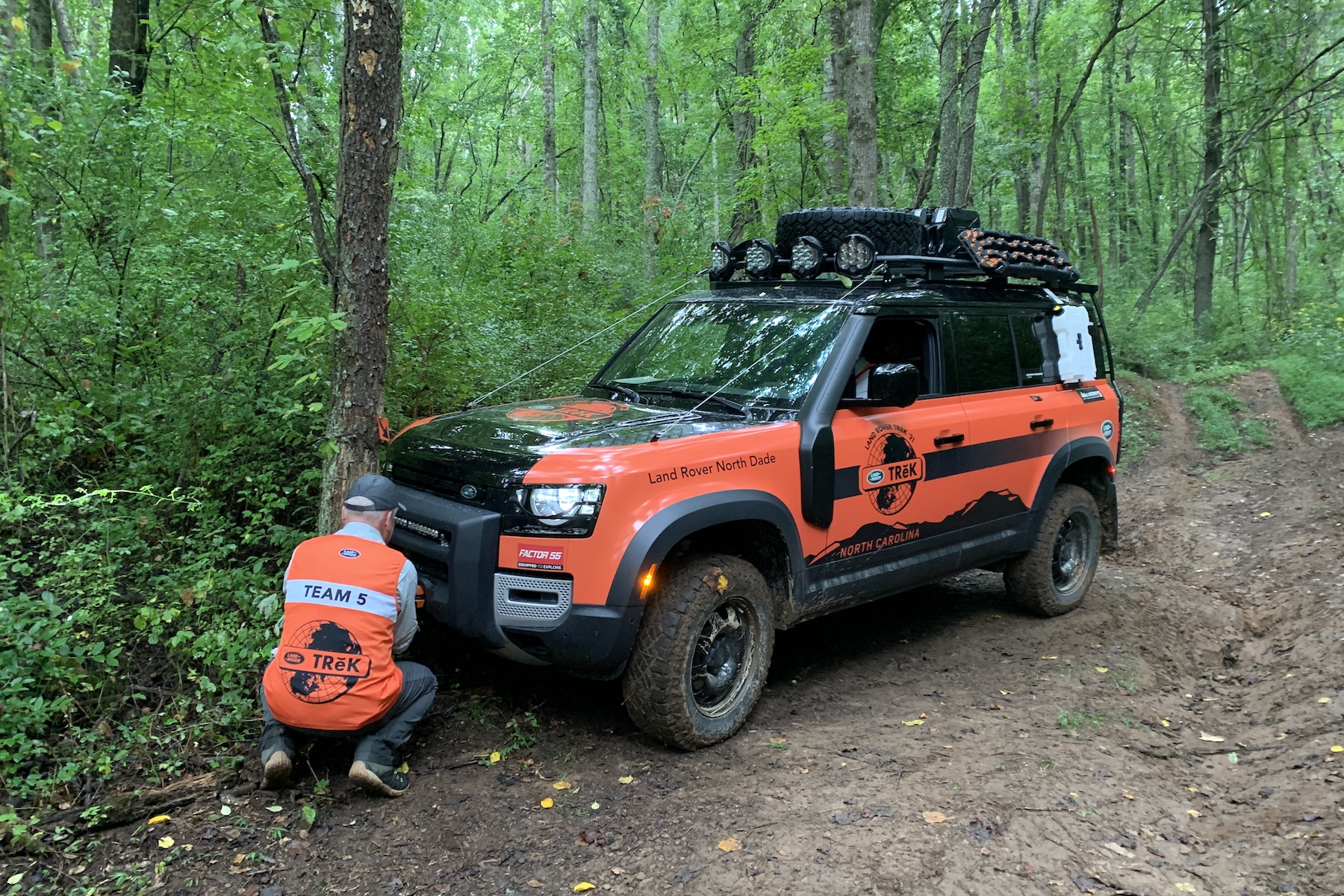 Tasks such as these help improve communication, lest one of the three competitors get clocked in the head with a wet 2×6 board, but what about vehicle knowledge? For that part of the brief, we pointed out kitted Defender north and hit up an off-road driving challenge (good for 30 points, by the way). By and large, the vehicles we used for Trēk were stock in terms of their powertrain, though the Goodyear tires shown here are factory-approved if not factory-fitted. Power output and 4×4 systems (including helpful locking diffs) were unchanged.

We should have known the Land Rover crew would have something more up their sleeve than a gnarly off-road course. Over the 2(ish) mile track, which included undulations that would have given Ivan ‘Ironman’ Stewart some pause, a series of office-style paper punches were hidden amongst the flora and fauna (fun fact: this area of North Carolina is technically a temperate rain forest). Navigating the Defender at wild angles close to these punches was necessary in order to properly mark the piece of paper officials had surreptitiously placed on the front bumper of the truck at the start of the trail. Make no wonder this challenge was called ‘Punch Your Ticket’.

Using every scintilla of Defender 110’s ground clearance (a maximum of 291 mm or 11.45 inches) plus the better part of a 40-degree departure angle, the 4×4 system deployed its electronic lockers to let fly enough North Carolina mud to satisfy the personal hygiene requirements of at least six Tamworth swine. The lone weak spot in this chain was tire selection; the previous night’s rain made all surfaces slicker than snot on a doorknob, leaving the Goodyear Duratracs scrambling for purchase after quickly filling the voids of their tread blocks. BFGoodrich KO2s or Yokohama Geolandar M/Ts (or even X-A/Ts) would have been a more sensible choice. But that’s an easily corrected detail.

All the Defenders used in Trēk are part and parcel of vehicle allocation to the retailer whose trio of employees are competing in the event, so don’t be surprised if one eventually shows up on Bring-A-Trailer or a dealer’s showroom. The off-road addendum carries either a Land Rover part number or can be sourced from a company called Lucky 8, so replicating the stern look (and capability) of these rigs is not outside the realm of possibility.

Trēk and its challenges force all hands to work together, relying on each other for navigation and the scattered bit of physical muscle (we’re lookin’ at you, manual winching). The intent is for the skills and knowledge that were developed during the competition to be passed on to other employees at the dealer level, creating a retail team ideally suited to provide a unique level of service to their customers. In terms of practical knowledge, it certainly beats the tar out of an online course.

Just don’t forget to pluck those burritos from the engine bay before handing over the keys.

The writer attended this media drive as a guest of the automaker. Content and vehicle evaluations were not subject to approval.