Some have summer convertibles; Darcy Southam has a summer truck.

Due to his line of work, the Hamilton-based business owner has subscribed to truck ownership for years. However this was the first year he picked up a vehicle that was more fun than utilitatrian. Looking for an upgrade to his current truck, he stumbled across the Ram 1500 TRX. Advised to consider driving the TRX only in fair weather, Southam relegated his Chevy Silverado to winter beater status.

Although there have been production disruptions due to semiconductor microchip shortage, Southam was fortunate enough to secure one of the first releases, picking up his truck from Johnston Chrysler in February. It’s still only one of a handful on the road. Southam tells us what he loves most about the 2021 Ram 1500 TRX.

“So this vehicle is a little bit different [than others] because it’s not overly practical,” said Southam. “It’s not very fuel efficient, and the box in the back has a tire in it so it’s not really used for a truck’s practical purposes. I just honestly bought the vehicle because it was such an impressive truck – the engine it has, the size, and just the sheer appearance of it. We’ve always had people either give us thumbs up or wave at us and you can definitely feel people staring at the truck and admiring it for its beauty and its sheer size. 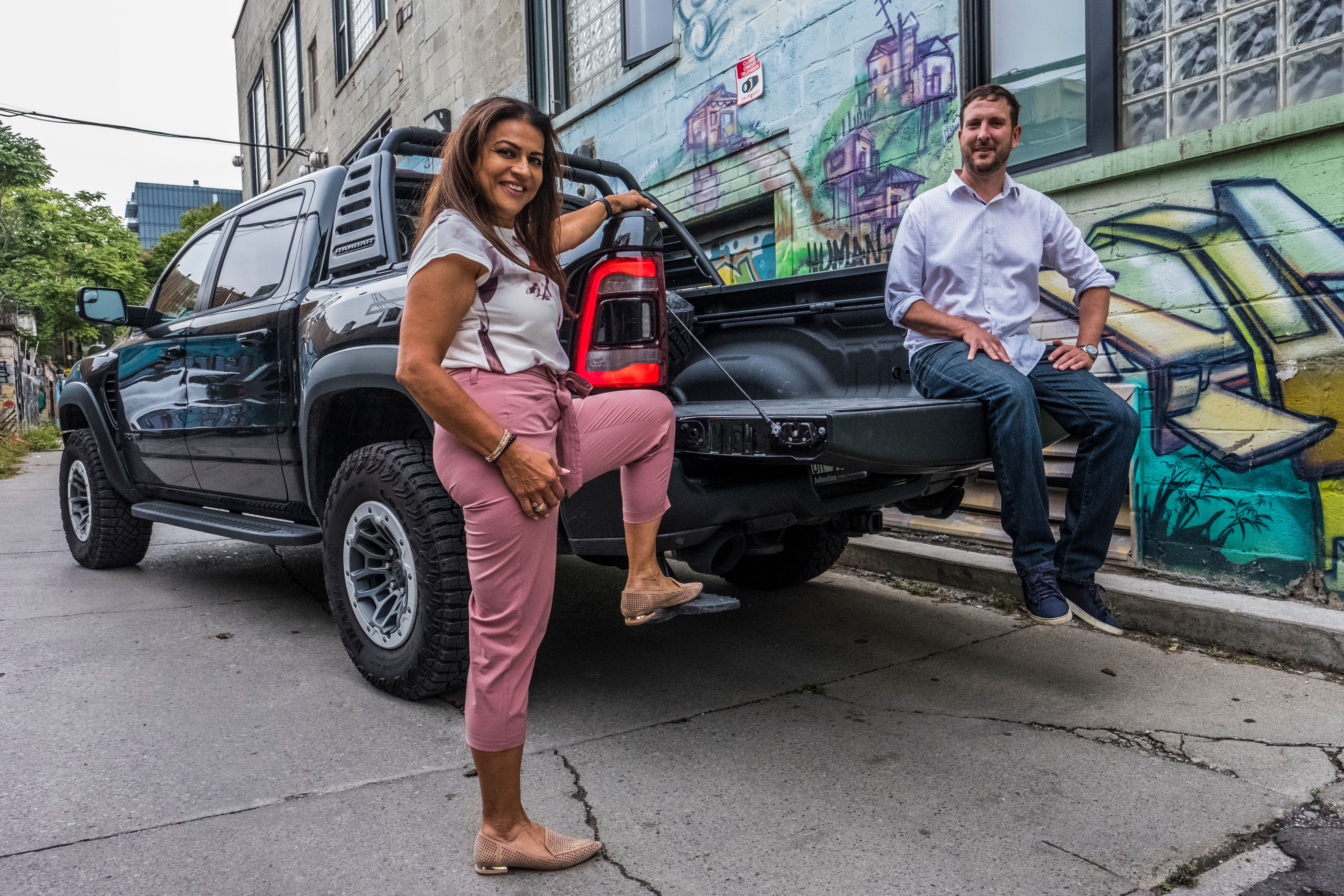 “[My partner, Achla Dhalla, and I] upgraded and got the beadlock tires, which basically means that you can deploy the tires really low and the tires won’t separate from the rim. It’s meant for racing; and the truck tires won’t pop if you go over a rock,” Southam said of his TRX that’s been fully-loaded with the level 2 equipment package. “It’s got Bilstein shocks, a heads-up [driver information] display, a RamBar and a [bed-mounted spare-]tire in the back, which were upgrades.”

Although the pandemic has hampered road trips south of the border, Southam has already taken the truck to Niagara Falls and wine country.

“Yeah, I’m not taking it so much to downtown Toronto, but we’ve taken it pretty much whenever we go out on the highways. It’s a beautiful truck to take travelling. It’s big and wide. It’s honestly quite luxurious and very comfortable, and probably the most comfortable truck I’ve ever sat in. My partner’s got a Mercedes, and I would say the truck that I have is more comfortable than her Mercedes. It’s just so wide and so grand feeling it. It’s beautiful.

“I was not always a truck person, I’ve been a car person, but I would say over the last 10 years, I’ve become a truck person. Owning my first truck is a different experience, it’s like owning your first vehicle. Once you own a truck, it’s bigger, it feels better, and you feel more in control. You don’t realize how much you use the box to store things in – to throw things in and to haul things around. But yeah, I probably would never go back to owning a car again, I think I’m definitely a truck guy forever.”

Mazibuko vs Musk: Another South African charges into EV market – this time in a bakkie

Renée S. Suen is a Toronto-based lifestyle writer/photographer and a freelance contributor for the Star. Follow her on Twitter: @rssuen

At 2.2-meters (88-inches) wide without mirrors, the Ram 1500 TRX is wide. “Because the TRX is wider than a normal truck, it’s actually required by transportation regulations to have three lights in the front hood,” said Southam.

First, there is an an engraving under the airbox cover of a tyrannosaurus rex with a raptor in its mouth. Next, the truck’s center console storage also compares — to scale — the size of a human, the Ram 1500 TRX, a tyrannosaurus rex and a velociraptor (a jab at the Ford Raptor).

Of the Ram 1500 TRX’s Hellcat-powered engine, Southam said this: “It can go from zero to 100 in like six-seconds. It is honestly the fastest truck I’ve driven; it’s like having a race car engine inside the truck. The truck has got some crazy neat suspension that you can change on the fly as you’re driving and extra shocks for actually doing jumps – it was built for going into the Baja desert [in its off-road Baja mode]. Although there’s no Baja desert around here, we’re planning on taking it – we haven’t had the chance yet due to COVID-19 – to Cayuga and see how it does on the racetrack out there. I’ve got a staff member that takes his car out there quite regularly and we’re hoping to line it up sometime before the end of the year.”

Get ready for an RV Summer

“It’s got heated and cooling leather seats in the front and in the back, which my other truck doesn’t have. It’s got a glass [panoramic] sunroof that goes front to back; and we upgraded for the Harman Kardon 19-speaker sound system that’s second to none. It’s a beautiful system that I listen to all kinds of music – everything from country to classical to hip-hop and rap, but also football and news talk radio.

“It’s got pretty much every feature that you would expect in premium car – lane departure warning, lane keeping assist, crew adaptive cruise control – but it’s in a truck.”

The post WHY I LOVE MY VEHICLE: 2021 Ram 1500 TRX, A supertruck summer driver appeared first on WHEELS.ca.