WHY I LOVE MY VEHICLE: 2021 Subaru Ascent Premier

It’s about to come full circle for Burlington-based Ryan Coleman, director in technology at BMO, and spouse, Erin, a medical office manager at Clarity Health. The duo previously drove Subarus – a Legacy and a WRX – but opted for a Dodge Grand Caravan when they had kids.

With their sons now in their teens, the Colemans found themselves looking for a seven-seater family car that would cater to different lifestyle needs: a vehicle Erin would use on her nine-minute work communte and that Ryan could use on the weekends to drive the whole family to their cottage three-hours away.

They eyed the Subaru Ascent when it was introduced a few years ago. The SUV appealed both to their sense of adventure and interest in comfort, in contrast to the practicality they required from their van. But unlike their previous Subarus, which were purchased used, the Colemans bought a new 2021 Subaru from Budds’ Subaru in Oakville. The Colemans tell us why they love their 2021 Ascent Premier.

“We still had a need for a larger seven-seater vehicle with our two kids, cat, and Maui, our dog we rescued a couple of months ago. We wanted something that was a little more fun to drive, a little more comfortable. The Caravan was pretty bare bones as a vehicle and we loved our Subarus in the past,” said Ryan.

“It was getting to that point where the first generation of Ascents were starting to come off lease,” he continued. “Originally our plan was to get one off lease, but then we saw the newer and improved model. And, they have really good finance rates – especially with the prices of the used car market right now. When we factor in that we were going to borrow money at four per cent from a bank or from their private financing, versus the 1.9 per cent we got, it just made financial sense. It wasn’t a big stretch on our budget and we get that peace of mind of having a car that’s got warranty for three years. It was worth making the jump to get new.” 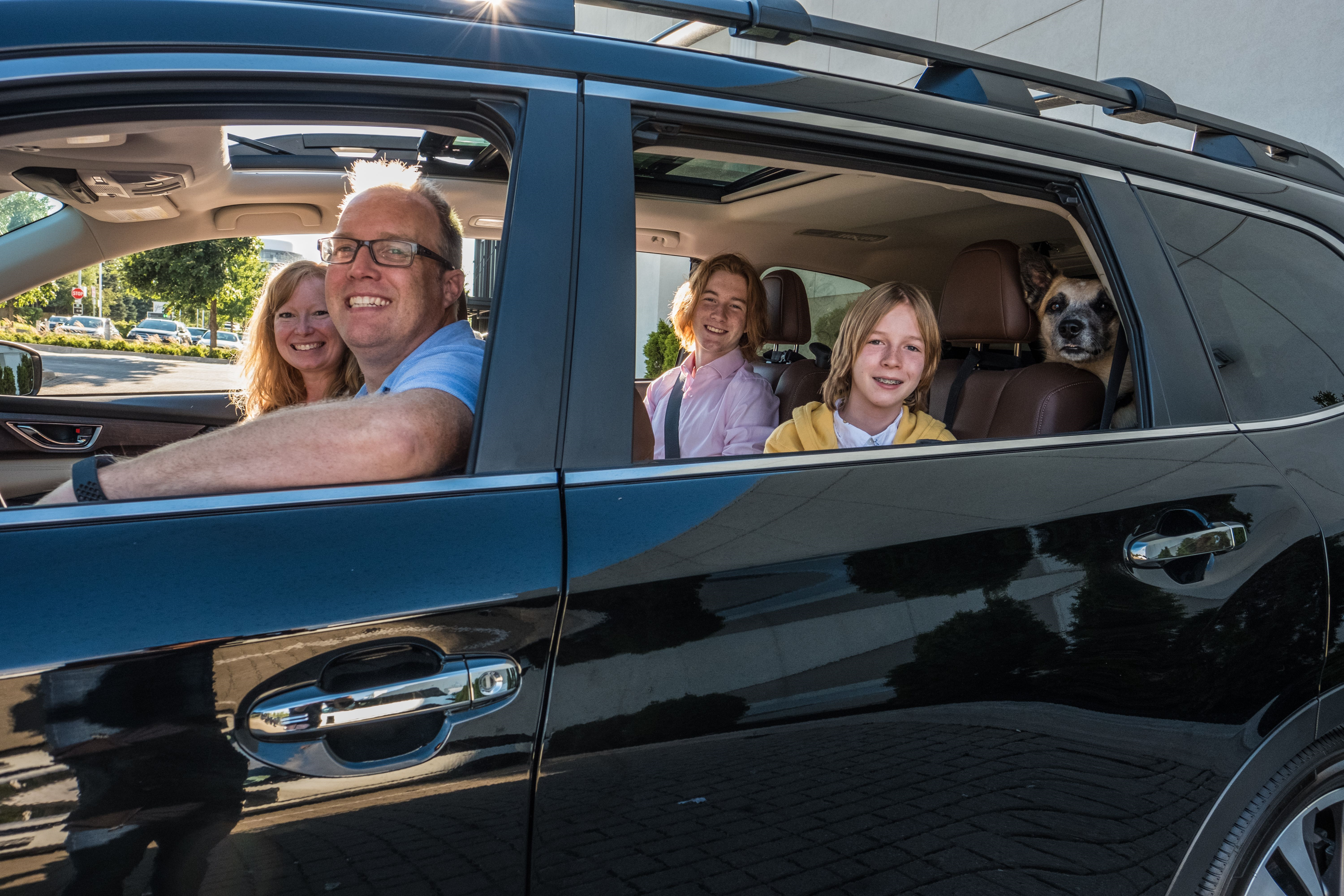 “The bulk of my driving has been going up to the cottage. We’ll still head to the cottage in the winter, but with the van we’d have to park in a certain lot and hike across the ice to get into the cottage,” shared Ryan. “We’re hopeful that we can drive in a bit deeper this year. We just ordered a wood-burning hot tub for the cottage which will arrive the week of Christmas, so we’re hoping that we can use the Subaru to help get it in without having too much trouble.”

Even though they’ve only had the Ascent for a couple months, the Colemans have confessed it has become their default family car. Their second car is usually parked in their garage, and is only used if they need another car. In fact, they’re planning to replace the other vehicle with a Subaru Outback.

“We used to have two Subarus and we loved being a Two-baru family,” Erin shared. “So we joke that this one is our first new Subaru, so her name is New-baru. But yeah, we’re gonna be a Two-baru family again.”

Renée S. Suen is a Toronto-based lifestyle writer/photographer and a freelance contributor for the Star. Follow her on Twitter: @rssuen

“I take Maui, our rescue dog, on different roads behind our cottage for walks. The Subaru’s all-wheel drive is great on those logging roads — gravel, and things like that — which are a little challenging for a normal car like the van, which was front-wheel drive,” said Ryan. “I also think I’ve got higher ground clearance with the Subaru. It’s a nice thing that nothing hangs below the bumper, so you’re not going to catch a muffler on a rock or something like that. The roads I take the Subaru down these days I never would have considered taking the van down.”

Universally loved by both Colemans, Ryan enjoys the Subaru’s ACC on his long drives. “On the highway, I really like being able to set the car on cruise and not have to worry since it slows the car down and and keeps the spacing between vehicles when you hit those kind of stop and go moments on the 401. It’s less of a chore to drive.”

For Erin, it makes driving to and from work easy: “I absolutely love driving it; the ACC is incredible even in stop-and-go traffic and for running errands.”

“I love the feature of having heated and ventilated seats in our model, especially on longer drives and how you can get stiff and sore sometimes,” said Ryan. “So having heated seats makes the longer drive comfortable, and it’s a really nice feature that the van didn’t have.”

More specifically, Erin likes that they can blast the air conditioner but still have the seat heater on. She says the combination is ideal for Ryan, who’s been working on a number of projects around the cottage.

The post WHY I LOVE MY VEHICLE: 2021 Subaru Ascent Premier appeared first on WHEELS.ca.